Some give it great reviews, some give it terrible reviews, some mediocre, whatever. Maybe I give “Love Song for Bobby Long” (2004) a pass because, whoa, is that a hungover John Travolta getting out of bed half-naked in a vintage Auburn T-shirt? And is he hitting on that waitress in an Auburn hat? And dude, does he actually drive to a BBQ joint in “Auburn”? But I didn’t know that any of that was going to be in there when we rented it from Hastings six years ago, didn’t know that it was based on a book written by an Auburn grad, but it called to me nonetheless, and I know I probably still would have bought it and would watch it again on certain nights to feel a certain way (Spring ’98, Spring ’99, 2001, 2003) regardless, because man, I know people like that and I’d be willing to bet that the folks who whine that the southern cliches (sure, most of the accents are pretty terrible) make everything but that slow motion-loop-on-YouTube-inspiring scene of ScarJo in a towel unwatchable haven’t sat around in circles with people like that or slept in the sweaty smoke of houses like that and maybe haven’t even toasted damp books over noon breakfasts of dirty glass orange juice like that. It happens, yo. 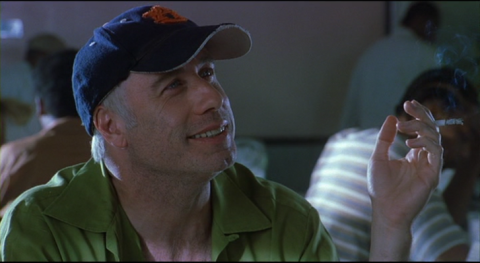 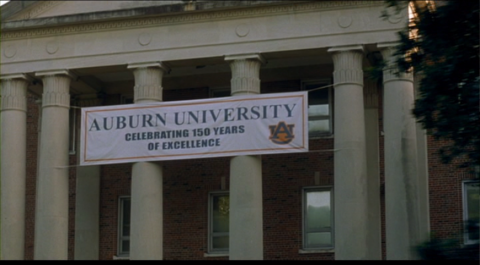 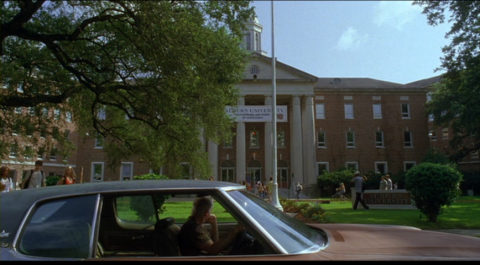 The plot: John Travolta is a burnout Auburn English professor squatting in a shotgun house in New Orleans with a backslidden Auburn grad student, Gabriel Macht, who is writing a book about him, or trying to, and acing Slummin’ 101. Some weird, vague stuff went down back in Auburn: infidelity, beat downs, divorce. So they ran away. They’ve got this complicated symbiosis thing goin’ and they communicate by making each other guess the author behind the random literary quotes they work into their conversations so as to feel alive and imbued. Scarlett Johannson is the estranged daughter of the house’s rightful owner, Lorraine, a recently deceased handbill legend of the New Orleans music scene who somehow established a life-changing level of intimacy with everyone in the movie, Travolta and Macht most of all. ScarJo’s mustachioed (pre-irony, mostly), porn-addled boyfriend neglects to tells her that her mom died until just before the funeral. ScarJo tries make it from their Redneck Riviera trailer to the Big Easy in time to attend. She doesn’t. She learns that Lorraine left her, Travolta, and Macht each one-third of the house… except Lorraine left her the whole house. Travolta’s lying to her. Being a jerk. Trying to run her off. She stays. They fight. They cuddle. They read. They sing. They smoke. They drink. They discover.

The book, “Off Magazine Street,” is way dirtier, at least language-wise (and Lorraine is morbidly obese). I read it alone in an empty house during the final weeks of Lubbock bachelordom. It was great. I tried tracking down Ronald Everett Capps, the author, to talk about all the above, writer to writer, or at least writer to feeler, and about how much the movie veered from his story, which supposedly pissed him off, and to tell him “War Eagle.” Didn’t happen. Googled him and Glom’ed him and filled out form emails on his bare bones-ish website (which loops that pretty good song he wrote) and called down to Fairhope arts organizations to see if I could get someone to go knock on his door. Nothing. (I even tried contacting the roots rocker son who cameos a bar scene and plays Auburn occasionally. Nothing.) But that he’s apparently a classic literary recluse, when I think about it, seems pretty perfect.

Thanks to all those who have sent “Did you know?” emails over the years, I definitely took too long to write about it.