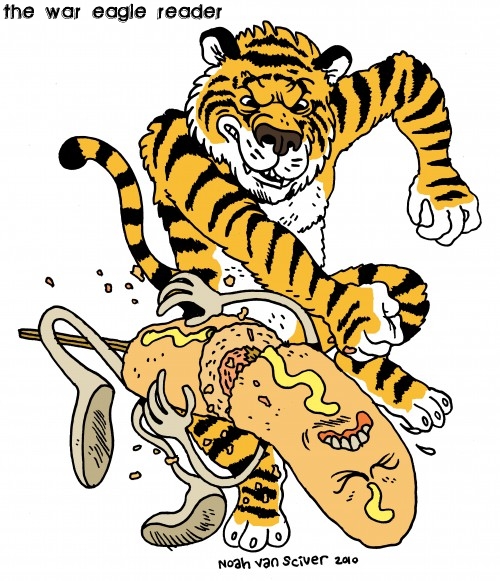 A year has passed since our unnamed and orphaned tiger was introduced to you, our much-beloved Readers.

And he’s still fighting mad at the sight of a corn dog unpummeled.

Especially a corn dog that thinks he’s No. 1.

He’s a deep-fried loser to you and me.

Much has changed since last year’s LSU contest … a 2010 national title for Our Auburn Tigers for one thing and a Heisman for the Blessed Individual.

The commissioned artist, Noah Van Sciver, has also taken the world by storm this past year, well, the comic book/graphic novel/funny pages world.

So, it was nice that The War Eagle Reader got to him first.

Got a book, “The Death Of Elijah Lovejoy,” published …

A strip in the Fantagraphics Books anthology “Mome: Vol 22” (with his own book “The Hypo” also soon to be published by Fantagraphics) …

I’m sure it was all due to his brief brush with Auburn’s greatness and not his dogged, unrelenting production of drawings and letters.