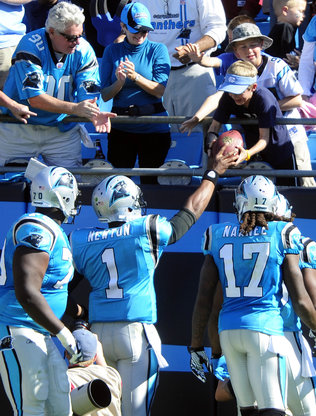 Cam Newton was busy making believers of the Washington Redskins on Sunday, but he took the time to let the little children come to him—or rather he to them—for the kingdom of Cam belongs to such as these.

After scoring the game’s first touchdown, the Blessed Individual gave the football that crossed the goal line with him to a 10-year-old from Raleigh named Law Widdill who was sitting with his father in the front-row of the end zone.

From the Charlotte Observer:

“I was shaking and sweating,” Law said. “There were tears in my eyes. It was really weird. Here was this Heisman Trophy winner, giving me a ball that he scored with.”Law and his 10-year-old cousin Nathan Guptill – who lives in Charlotte and was right behind Law when Newton handed up the ball – have decided to share custody of the football. It’s at Nathan’s house now.

“It’s as much his as it is mine,” said Law, a fourth-grader who went to the game after his uncle bought tickets from a friend and invited Law and his father to go. “We figure we’ll switch it back and forth about every four weeks.”

“I play tackle football in my backyard, too,” Nathan said, “and we played after the game Sunday. But we used another ball. The Cam ball is too special.”

Though we know Cam is no stranger to random acts of kiddie kindness, this particular display of charity was apparently inspired by the still small voice of, yes, Mike Shula.

The Panthers’ quarterbacks coach had witnessed Newton’s “Clark Kent Becomes Superman” touchdown routine a number of times this season – he does it after every rushing touchdown and now has seven in seven games.

Shula had some advice for his star rookie quarterback last week.

Newton recounted after Carolina beat Washington 33-20 Sunday: Shula “says when you celebrate, it’s not a celebration unless you give back. He says, ‘You do all that riff raff, whatever you do, but at the end you give that football to a little kid. You find a little kid.’

Once again, Cam Newton is a cocky, selfish jerk who will never be able to run like that in the NFL. Deal with it.

UPDATE: While we were writing this, Cam and Ziemba (dressed as a Ghostbuster) were visiting sick kids in the hospital.

Related: Hey Cam- how’d you get that S on your chest?