The bulldog brain trust at that Starkville coffeehouse is at it again, this time offering Auburn advertising space on their legendary marquee for… you’ll never guess how much… $180,000.

It’s an odd choice as far as smack talk goes, because the only reason the figure “$180,000” has become shorthand for recruiting violations is because that (allegedly) was Cecil Newton’s asking price when he was shopping his son to parties with ties to… what school was it… ah, yes: Mississippi State. Thanks for reminding us. 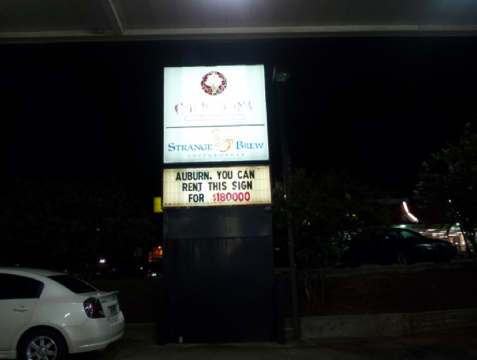 Of course, it might actually be fun to rent it… maybe put up a photo of Cam wearing an Under Armour version of that “You Couldn’t Pay Me 2 Go To Starkville, Either” shirt and drinking a mocha-chino from a crystal football. But then they might just take the money and try to buy another player (emphasis on try)… and Auburn fans want no part in something like that.

However, as you may recall, we have no problem with writing comical coffeehouse reviews on Urban Spoon.