The first Auburn legends to receive the larger-than-life treatment in the the Great Post-National Championship Jordan-Hare Re-Bannering of 2011 were the coaches whose names are attached to the place. Shug Jordan… Pat Dye…

And Cliff Hare, who played on Auburn’s first football team and who was a bigwig on the Auburn Athletic Faculty Committee and who later served as president of the Southern Athletic Conference (the SEC’s predecessor), and who could teach the heck out of chemistry….

… but who, technically speaking, was never actually, you know, a coach.

For the people who noticed—and it even took us a few power-of-suggestion, where-did-they-bury-the-survivors hours to pick up on it—it was a problem.

After contacting the Athletic Department, we learned that, thankfully, the misnomer wasn’t an instance of someone skipping their homework, but rather an attempt “to honor those three individuals and still provide a ‘title’ of some sort,” in the same way that the signs honoring Auburn’s great teams and players had titles.

And that’s what we thought it was. That’s how we were ready to justify it to ourselves (“I mean, he was a coach of life“) until the next renovation. But now we won’t have to… 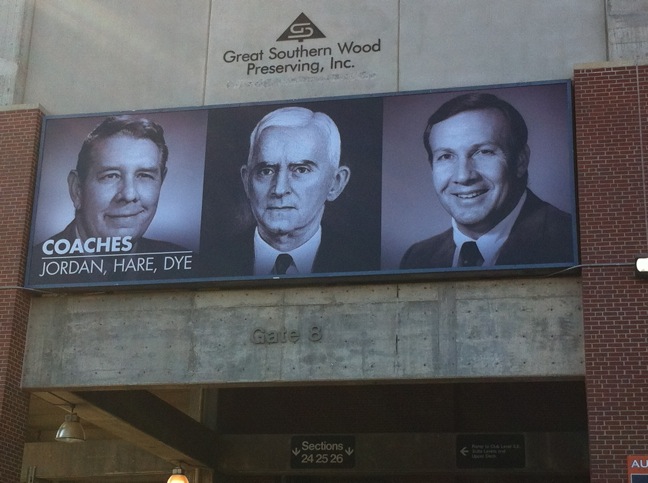 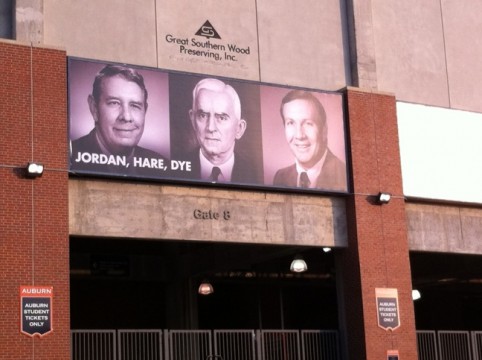 … because as you can see, this calculated historical casualty of modern aesthetic convenience has been “corrected”… with what appears to be an entirely new sign.

We expect Toomer’s to be fully stocked with “Jordan Hair Dye” (thank you, Larry Lofton) by the weekend.

h/t Walker Hall, photos by, you guessed it, Brian Brown.