On the field, and pretty much everywhere but one stupid smudge between the win and loss columns, the 1958 Auburn Tigers were just as good as the team whose national championship they defended. Maybe better.

The one (partial) blemish on Auburn’s 1958 record (9-0-1) came four games in — a 7-7 tie with longtime rival Georgia Tech. That Yellow Jackets fans celebrated the outcome as if it were a victory was itself deemed a victory for the general health and revival of the Auburn program under Shug Jordan.

This showed up in the Plainsman the following week [click to enlarge]: 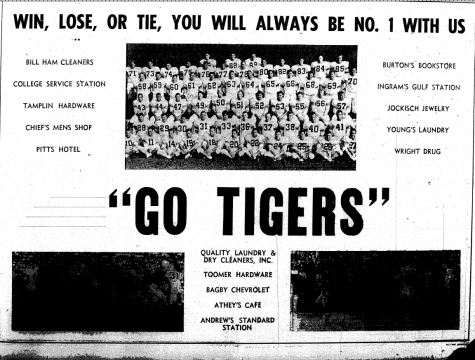 Auburn finished the season ranked 4th behind LSU, an 8-1-1 Iowa and an 8-0-1 Army. But according to David Housel, the reality of the ’58 season wasn’t lost on the Atlanta Journal-Constitution, which in early January 1959 reportedly opined: “Who’s kidding who? There’s only one No. 1 team in America, and that’s the Auburn Tigers.”

Related: Feelin’ Great in ’58: Notes On the Only Auburn Team To Defend A National Championship.
…