They can call it a “senior project” all they want, but it’s starting to seem  seem like Robo-Eagle may really come in handy soon… because Spirit and Nova are just getting way too good at scaring the hell out of Auburn fans:

In all seriousness, ye olde bird of prey seemed none the worse for wear after ramming his own reflection (and terrifying children) during his traditional pregame flight.  After picking the heads of several fans clean of lice, he finallyyyyyyyyyyy EAGLE’d, HEY! and was taken off the field as if nothing had happened.

Nova, for what it’s worth, was thrilled but concerned: 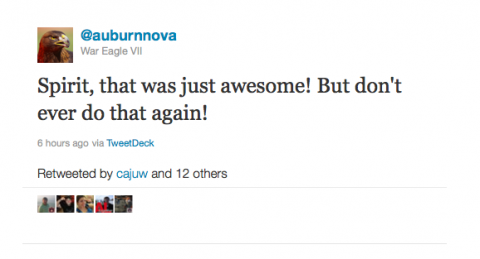