This is about Auburn’s people.

Auburn University has gone to great lengths and expense to save the oaks. The campus experts have consulted with some of their best peers in the country. The community grieved a bit, accepted the support and condolences of friends near and far and is moving on in a wait-and-see environment.

The university decided in mid-summer that they would allow for Toomer’s Corner to be rolled again this fall. The cleanup was the concern, they said, and the firm that does the cleaning would no longer use a pressure wash system, but would clean the trees by hand.

But it all feels different now.

Opinions varied when the roll on announcement was made. Some were ready to continue the tradition. Others counseled restraint. More than a few groups volunteered to help with the cleaning. It was time, they said to themselves, to demonstrate a new kind of contribution to a place they appreciate. After the season’s first game, some of them followed through and helped with the cleanup. Volunteers came and went, working alongside the professional cleaning company for a brief time. It rained and the mushy paper turned even more fragile.

But the health of the trees and the soaked cellulose are the only things around Toomer’s Corner that are fragile. The spirit is strong. 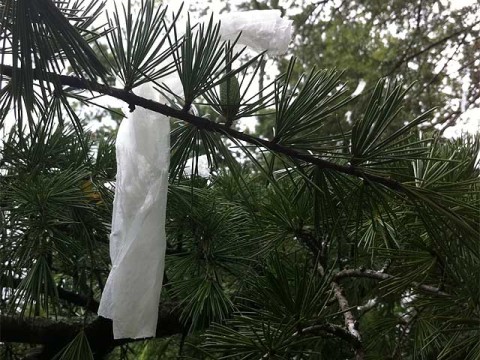 I thought a lot about that while we helped clean up the celebration today. We decided, for our part, that we’d clean a little farther down College Street.

That tree above grows near Langdon Hall and, while it is a bit younger than the Toomer’s Oaks, it has a history of its own. Inside Langdon Hall they debated secession. Near this spot is where students of another generation heard President Roosevelt ask for a declaration of war over a loudspeaker after Pearl Harbor was bombed in 1941. Near here is the lathe that commemorates Auburn’s role in the Civil War as a hospital and who’s young men served. Recovered from Selma and presented to Auburn in 1952, it has been the site of endless ghost tales these last 60 years. Near this spot many young couples have been engaged, another was recently married and, during my time in school, I asked a nice girl out on a date and she agreed. That’s a lot of history, too.

None of those things belong to a tree, but to the people of Auburn.

They’re calling it Unrolling Toomer’s. It is going to grow slowly, but there’s enthusiasm there. It requires garbage bags, a few yard tools, gloves and work, hard work.

As all good traditions, it has started informally, organically and by word of mouth. Unrolling Toomer’s is late Sunday mornings, or after church lets out, and you simply clean until you’ve had your share. Some picked a little, others cleaned up pounds of the stuff.

No one ran anyone off, and the cleaning company doesn’t mind the help. Unrolling Toomer’s started small, but there will be a few more volunteers on College Street next week. There will be more the time after that. One day there might be great crowds, hopefully including you, and perhaps big cheers. This should be as much of a celebration as rolling the corner.

After all, this is about the people. These particular good-natured people think it is great to be an Auburn Tiger.