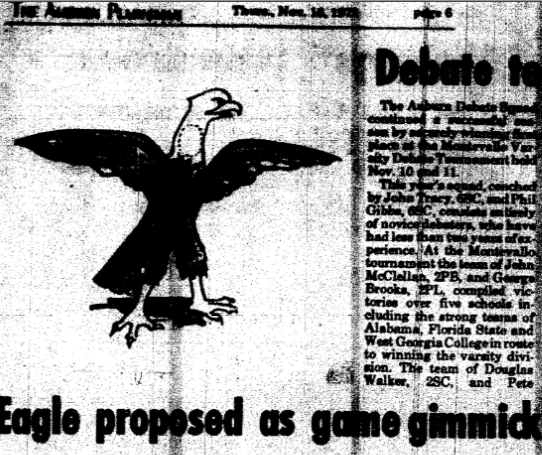 Had an Auburn professor had his way, your Twitter feed would still be jammed with demands that you text your vote to 78527—Auburn fans are just like that (and yeah, go ahead and do it)— but it wouldn’t be for the best tiger mascot ever. It’d be for, as The Plainsman put it, a “seven-foot eagle that… pats cheerleaders on the behind.”

That’s what was on the drawing board of whatever committee had boards to draw that kind of thing on back in the pre-anthropomorphic Auburn days of 1972.

“I feel that the importance of this thing as University promotion is tremendous,” Auburn art professor Tazewell Morton, a 1957 Auburn graduate, told The Plainsman. “And at the present, Auburn does not have a strong visual image.”

Indeed— until 1979, when our fabulous feline sprang from the then only recently discontinued Phil Neel drawn covers of Auburn Football Illustrated, the scope of AU mascotting was limited only to the real feather and blood no-that’s-our-battle-cry War Eagle and the first of the two Holloway kids who were allowed to roam the sidelines in tiger costumes(more on that later).

“I’m not advocating getting rid of the eagle, and I think the child is cute,” Morton said. “But you can easily see how the eagle costume would have more visual impact.”

Oh, it definitely would have had an impact; commissioned to design the costume was Blaine Kern Arists, Inc., the folks who make Mardi Gras look like Mardi Gras.* (I’m imagining something like the thing seen on the sidelines of the 1973 Auburn-Florida game.)

“The costume would allow the wearer complete freedom of movement, and it would probably be constructed of a durable fabric,” Morton explained. “The colors would have to be chosen and coordinated to stand out against the colorful football crowd.”

“Other schools have such gimmicks. Kansas State has a Jayhawk, USC has a Trojan…”

But why an eagle instead of a tiger? LSU.

“I feel that we have a distinctive name in ‘war eagles,’ and since there is already a ‘tigers’ in this conference, we might as well use this distinction”— and from the way the story reads, we came close to. The head of Auburn’s Spirit Committee was down with it. So was Dean Foy.

“Anything that is an expression of interest and enthusiasm, I’m in favor of,” ol’ Wah Eagle was quoted as saying. “Of course I’m usually more permissive to this type thing; some people might feel that it is irrelevant. But, if students, alumni or anyone wants to do this, I say go, go, go.”

What made it stop, stop, stop—AU Inc.’s “Tigers only” orthodoxy was still 20 or so years away—is anyone’s guess. But maybe we should have let him have a shot—Morton is the dude who designed an Auburn University flag (with a peace dove) that, so the story goes, was placed on the moon by Auburn grad / hero of mankind / rich man’s Gary Sinise / Apollo astronaut Ken Mattingly.**

*If I read the story right, there actually was a design delivered; we’ve updated our eBay alerts accordingly.

** How did I not know about this? If it’s true, then Auburn owns space harder than we ever imagined.