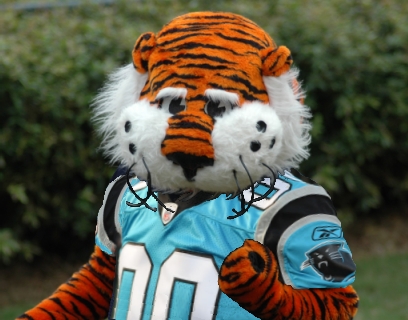 When the NFL’s months-long labor dispute came to an end Monday morning, the result was an immediate flood of an entire offseason’s worth of work by team general managers and scouts, including teams getting in touch with undrafted rookie free agents and extending invitations to fall camps. In the Auburn corner of the universe, that meant that the Tigers from the 2010 national championship season that were snubbed in April’s NFL Draft were given another shot at joining a franchise this fall. Twitter was abuzz Monday afternoon as players began talking with teams and weighing their options. And when they were allowed to agree to deals Monday night, it was like the Draft all over again.

On Tuesday and Wednesday, the landing spots for several former Tigers were confirmed. In all, eleven of Auburn’s undrafted free agents have joined the four drafted back in April and are beginning work at NFL camps.

While Carolina obviously gained a lot of adulation from Auburn fans, the Raiders are staying strong after bringing in Zac Etheridge. Etheridge heads to Oakland to join Jason Campbell, Quentin Groves, and Walter McFadden in the silver and black.

Meanwhile, Josh Bynes and Terrell Zachery are headed to the Ravens to join Ben Grubbs, and Mike Berry is headed to New England to join Jonathan Wilhite and the Patriots.

Demond Washington was the first to reach an agreement, with Kansas City, and Mario Fannin wasn’t far behind, joining the Broncos. Wes Byrum will be going across the country to Seattle , and will join the Seahawks and Ben Obomanu.

Byron Isom will find his new home in Minnesota, along with former Tiger wide receiver Devin Aromashodu, who is joining the Vikings after a stint with the Bears. And Mike Blanc is headed to San Diego, as is former Tiger and NFL veteran Takeo Spikes, joining Charger stalwarts Marcus McNeil and Tyronne Green.

And, of course, Darvin Adams and Ryan Pugh are off to join the Carolina Panthers. In Charlotte, they’ll reunite with Cam Newton and Lee Ziemba, who were Panther draft picks in April, meaning the Newton-to-Adams connection (and the Ziemba/Pugh “kinda’ cousins” connection) will hook up once again.

In just one off season and one draft class, the Carolina Panthers have gone from having zero Auburn alums to four, assuming each one makes the cut through training camp. My guess is that either Cam is an amazing teammate and nudged the front office on draft day and this week to picking up his guys, OR the Panthers organization did it on purpose to guilt their first overall pick to signing for cheap and not hogging all the cash from his college buddies. Seeing as how with the new rookie wage scale the team spends the same amount of money either way, I’d say it’s the former.

Again, Takeo Spikes and Devin Aromashodu have found new homes, and so has Will Herring who will be joining the Saints. But several Auburn NFL veterans have yet to find a home. Ronnie Brown is an unrestricted free agent; there are rumors that he could be heading to the New York Giants to reunite with Brandon Jacobs, but talks have also re-opened that would have him re-signed in Miami.

Cadillac Williams is said to have a spot waiting for him with Tampa Bay as the third-down back behind LeGarrette Blount, if he can’t find a franchise that can offer him more playing time elsewhere. That spot appeared in jeopardy when Reggie Bush was in talks with Tampa, but Bush has since signed with Miami. (Ricky Williams is unlikely to re-sign with the Dolphins, so Bush’s appearance there wouldn’t lessen Brown’s role.)

Carlos Rogers is also an unrestricted free agent, and recently said, “It’s time for a change.” He’ll be leaving the Redskins, who have already signed cornerback Josh Wilson to replace him. His destination is as up in the air as anyone’s, and would presumably be tied to the free agency of former Raider Nnamdi Asomugha. After Asomugha, Rogers is the best corner available, and should find plenty of interested parties amongst the teams that lose out on Nnamdi.

For Rogers, Brown, and Williams, they’ll have to put pen to paper and get a contract signed before they can enter camp, and so too will No. 1 draft pick Cam Newton, who unlike fellow first-rounder Nick Fairley, has yet to agree to a deal. As I mentioned on Tuesday, the last Tiger from the 2011 class to get into camp might be the first one that was invited—Cam Newton. While it would be naive to think that Cam’s agent team and the Panthers weren’t talking about this a little in secret during the lockout, these things do take time, especially without any kind of precendent for signing under the new CBA. Hopefully, the Panthers can put together a nice signing bonus to make up the slack and Cam can get into camp as soon as possible.

As for the rest, their work begins now. Camps across the league will open up in the coming days, with the latest opening on Sunday. The undrafted rookies will have to work hard in camp and show their worth during the preseason and on special teams in order to survive the cuts and make the big bucks. They’ll have to come onto the team, undrafted and under the radar, and prove that they’re the type of player that can help a team win championships.

Something tells me they’ve got a pretty good shot.