I spent last season knowing that we were going to be the national champions (I swear).

I get to spend this entire season knowing that we are.

As an Auburn fan, the feeling is pretty bangin’. It’s going to make the walk to Jordan-Hare seem shorter, the girls I pass on the way there even prettier (if possible), the orange and blue babies cuter (especially because one of them will be mine, Phoebe, born mere days before the magazine’s deadline), the Coke taste even better, the bleachers more comfortable, the eagle more majestic, the scoreboard even sharper, the operatic rap-rock soundtrack more tolerable, all the songs and shouts and chants and cheers even more familiar, the tingles even tinglier. Despite how quickly everyone is predicting us to hit bottom, I can’t freakin’ wait to watch an Auburn football game from the top. And thanks to my job editing the inaugural issue of Tigers Kickoff (hinted at here, and here, with a letter from the editor being re-purposed before your eyes, and in stores now), I kind of feel like I have a better idea of what it’s going to look like than anyone else in the universe right now. (Sorry Phillip Marshall. And God.)

I landed the gig thanks to a recommendation from Jay Coulter at Track’em Tigers (who landed a new immediate-travel-required job a week after Maple Street approached him with the honor and therefore had to decline it). And I of course quickly enlisted the assistance of TWER friends and regular contributors to help me answer the two greatest questions facing Auburn fans halfway through 2011.

Question No. 1 — What the hell just happened? I mean, the past ten months have straight up been the craziest in the history of the Auburn football program, in the history of the town of Auburn itself. I’ve yet to even process our comeback in the Iron Bowl, let alone that a Bama fan poisoned the Toomer’s oaks afterward. Or that a Miracle Man came out of Juco nowhere to win Auburn its third Heisman Trophy— Kenny Smith has an interview with the guy who won us our first (and now you can take the Bo story with to you bathroom, etc.)—and second national championship in the midst of an internet-crashing controversy that Paul Finebaum described as possibly the biggest story in college football history (I asked Will Collier to handle all that). But it happened. It all happened. And Young Bartley plotted a wacky A-Day to A-Day timeline to prove it.

Question No. 2 — Where do we go from here? If you recall—and if you can’t, check out our history section: Van Allen Plexico took ’94, Ben took ’05—seasons after undefeated seasons have almost always been good ones for Auburn. But only one other Auburn team in history has defended a national championship. That team didn’t lose a game (but sadly the story on 1958 was cut from the magazine for space reasons but will soon be posted on TWER). Fifty-three years later, it’s a different story. This group of Tigers is all but unranked in pre-season polls. SEC sports writers just named us 5th best in the SEC West. No team has ever been given less of a shot as repeating as national champions, but inside Tigers Kickoff you’ll find OA-News beat writer David Morrison‘s and our own Justin Lee’s comprehensive tag team breakdown of the whipper snappers who are going to give it a shot anyway (and the schematics of the Gus Malzahn offense they’ll employ to do so, explained like only Smart Football’s Chris Brown can), as well as profiles of each team that will try to stop them courtesy this dude named Jerry Hinnen.

Here’s the full table of contents:

Challengers To The Throne: A Team-by-Team Breakdown of Auburn’s 2011 Schedule
by Jerry Hinnen and Doug Gillett

10 for 2011: 10 Recruits Poised to Make a Difference for Auburn This Fall
by Jerry Hinnen

Hop On Gus’s Bus: Under the Hood of the Relentlessly Successful Malzahn Offense
by Chris Brown

Lovin’ Lutzenkirchen: Getting Jiggy with the Tigers’ Tight End
by Jeremy Henderson

Let’s Do It Again: What Will It Take for the Tigers to Repeat?
by Jerry Hinnen

Standing With Cam: A Single Bound, a Heisman Trophy, and Everything In Between
by Will Collier

The Greatest: Why The Iron Bowl Is the Best College Football Rivalry
by Jerry Hinnen

The Audacity of Hope: Sanctions, ‘The Streak,’ and the 1994 Auburn Tigers
by Van Allen Plexico

Great Potential: The 2005 Tigers Are One of the Most Underrated Tigers Teams
by Ben Bartley

‘Bo and Me’: A Look Back at Jackson’s Career Through The Eyes of an Auburn Fan
by Jeremy Henderson 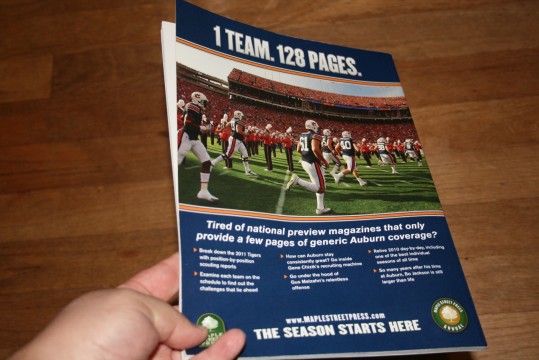 It took some doing, and God knows it took some saintly, otherworldly patience from the Maple Street folk, as well as the wife and my six-year-old daughter Sadie (who helped interview a certain jig-happy tight end), but I’d like to think it pure Auburn scripture—128 jam-packed, ad-free pages that give voice to an undeniable, undefeated truth:

The 2011 Auburn Tigers are the defending national champions.