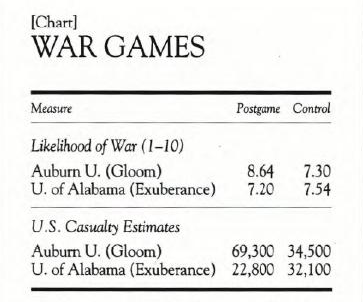 You don’t need a chart to tell you that Auburn and Alabama fans equate an Iron Bowl loss with the end of the world, but it’s nice to have a scientific point of reference.

From a blurb in the April 1993 issue of Harper’s Magazine citing “Perception of Threatening Events in the Emotional Aftermath of a Televised College Football Game,” a study first published in the Spring 1992 Journal of Broadcasting & Electronic Media:

Immediately following the December 1, 1990 ‘Iron Bowl’ football game between Auburn University and the University of Alabama, the authors asked students at each university who had watched the televised game to assess the likelihood of war with Iraq (on a scale of 1–10) and to estimate the number of American casualties that would occur if war broke out. The responses were compared with those of control groups of students on each campus who hadn’t watched the game. Alabama defeated Auburn, 16-7; the researchers found that the “distraught fans” at Auburn deemed a war “significantly more likely and devastating, in loss of life, than did their ecstatic counterparts” at Alabama.

We’re not sure how much representative stock you can put in data gleaned from students who didn’t watch the Iron Bowl (how many were there?)*

But we’re pretty sure that were a similar experiment to have been conducted in the immediate aftermath of the 2010 Iron Bowl, half the Bama students would’ve checked “90 percent probability” to Cam Newton being an actual terrorist or something.

* But thank God they all sucked at guessing back—the actual number of U.S. casualties during the Gulf War? 294.