There’s a new McDonald’s in town— in Tiger Town, actually, built to the same Starbucks-esque specifications met in renovations completed this week at the area’s four existing Golden Arches.

But we don’t even think being the swankiest McDonald’s market in the country would have kept Bill Holbrook, one of Auburn’s most notable alumni cartoonists, from inking his less-than-P.C. wrath on Auburn’s embrace of the fast food industry in The Plainsman, like he did during the McGlut of 1978 [click to enlarge]. 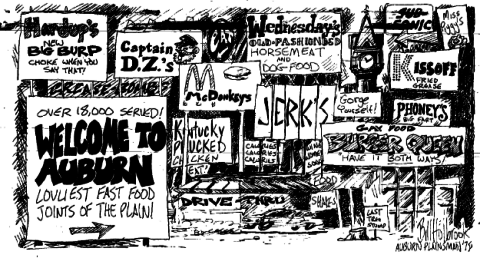 In the meantime, I so hope the one on Magnolia is still serving breakfast.

* Friday Night Lights Life
* The War Eagle Jeep in Vietnam
* 78 never-before-seen photos of the Kopper Kettle explosion of 1978
* Rare candids of Pat Sullivan at the 1971 Heisman banquet
* That time Green Day played an Auburn house show
* The G.I. Joe from Auburn
* Two campy degrees of separation between Auburn and Swamp Thing
* I Survived the Kopper Kettle Explosion and all I got was this T-shirt
* “Alabama Polytechnic is the best…” for Eugene Sledge in HBO’s The Pacific
* The Ron Swanson Pyramid of Auburn
* The Auburn plaque in 1984′s Tank