Atkins for Hire. Author and Auburn man Ace Atkins has been tapped to continue writing the best-selling Spencer detective novels (as in Spencer for Hire) created by the late Robert B. Parker. Most of Parker’s fans seem down with it. Some don’t — an owner of a New York mystery bookstore told the Wall Street Journal that “Ace Atkins is a terrific writer, but he’s not Robert B. Parker.” Legend has it that’s exactly what Danny Wuerffel said before Atkins killed him with a karate chop. (Speaking of legends of ’93, if you haven’t read Ace’s account of that year’s Auburn-Arkansas game, now would be a great time.)

Doing Daniel Moore with Daniel Less. Michael Leon Davenport, the Joni Earekson Tada of Athens, Ga. gameday street artists, will be taking requests for Auburn-themed drawings at the Athens Auburn Club’s May 18 meeting. Davenport, 44, lost both of his arms in an accident when he was 13. But he can do things with a Sharpie (in his mouth) that most of us can’t do with a Sharpie (in our hands). It’s inspiring, to say the least.

“Some messing with Texas now allowed.” A Texas tabby cat mauled its owner so severely the man had to be airlifted to a Houston hospital. NBC’s Offbeat Sports (which is for some reason reporting the story) thinks the incident cause enough to question the Lone Star state’s collective manhood. And since the victim fought the cat with a knife and still lost, it might be. Remember the Alpo!

From the TWERchives, [August 9, 2010]. On the Rolling Plains of Dixie, ‘Neath its sun-kissed sky… 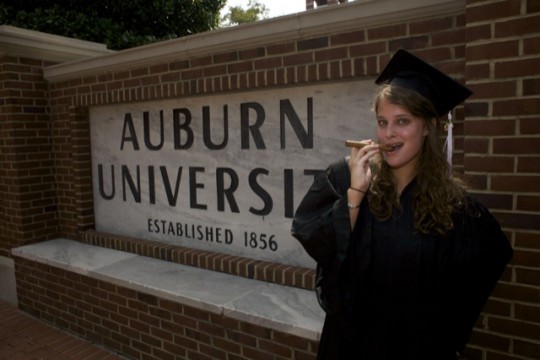 Nightmare Newton: Might be old news, but the Blessed Individual has stopped questioning his ability to emulate the other three starting quarterbacks in the NFC South.

“I ask myself now can Drew Brees do what I can do?’’ Newton said in an interview last week with WFNZ Radio in Charlotte. “Can Josh Freeman do the things that I can do? Can Matt Ryan do the things that I can do? So, I’m motivated to be what those guys are, which is be an excellent pocket passer. I think I have the attributes to do that… So my challenge to myself is to become what those guys are and even better. And as I work, one thing that sticks out in my mind is how can I become a defensive coordinator’s nightmare?’’

You can read the entire transcript here.

Can’t stop listening to. This song by Generationals. They’re playing May 20 in Atlanta, May 24 in Birmingham.

But the only band that matters. Is in Auburn this weekend. The Pine Hill Haints play Friday night at The Independent (billed as Christmas Magic, for legal reasons) and Saturday night (as themselves) at Standard Deluxe in Waverly. Be sure to request their new, unintentional tribute to the Toomer’s oaks. It’s good.

Something we should know about? Let us know: [email protected]