This year’s edition of EA Sports’ NCAA Football has generated an amazing amount of buzz among Auburn fans. EA’s pre-release marketing campaign for NCAA 12, due in stores July 12, has been in full swing for several weeks and the defending BCS national champions have been implicated every step of the way. Whether by nominating Nick Fairley for their cover athlete or releasing gameplay footage of oft-rumored, but never-seen alternate uniforms, the fine developers at EA Sports have (smartly) been making sure to keep the Auburn fan’s attention.

And while some of that attention may have recently been lost, there may be reason yet to buy the game (besides the annual roster update).

EA recently released a set of NCAA 12 screenshots featuring Mark Ingram’s former teammates taking on their arch-rivals… who were clad in blue pants.* Meanwhile, in the game’s first released trailer, the keen eye will notice that Auburn’s usual white pants had “War Eagle” written across the belt line, just as the folks at Uni Watch reported (back in January) we would see on the non-virtual Tigers this fall. 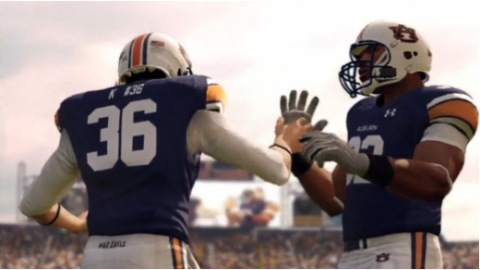 With that level of attention given Auburn by developers, it was also natural to wonder if the Tigers would be shown any love when it came to one of the game’s biggest new features. This year EA is putting a big emphasis on gameday experience, and that includes unique presentations for a number of different schools. Take a look at the trailer and notice what you see — or, more importantly, what you don’t see.

Bevo, Ralphie, Renegade, Mike the Tiger, Uga? All accounted for. But will the greatest live mascot, and the most exhilarating tradition in sports, be captured in the game?

According to Tommy Gschwend, an administrator at The Gaming Tailgate, the answer is yes — Auburn’s eagle flight is set to be featured in NCAA 12.

Early this week, Gschwend participated in an ongoing EA Sports focus group event called “Community Day.” Yesterday, in the website’s forums, he gave up the goods:

…we also saw Auburn’s War Eagle as part of their entrance, however it was still a work-in-progress when we saw it so they didn’t really want us to capture any images of it.

It’s the first indication — and a solid one — that the uniquely Auburn tradition would be included in the game.

Gschwend confirmed in an email that the eagle was in flight, circling above virtual Jordan-Hare Stadium.

Other than that, details are sketchy; the developers are still trying to keep plenty of things under wraps. But as for how the eagle looks, Chris Jacobs, another Gaming Tailgate administrator who also saw EA’s beta eagle, says to expect a high quality model soaring through the air, not just sitting on a perch. EA’s developers are apparently giving the BCS national champions special attention, or as Jacobs put it, “To the victor go the spoils.”

Playing a game with a Florida player on it for the past year hasn’t done anything to my health. But will I be able to play a game with Mark Ingram on the cover? I think I could knowing that Nova or Spirit and all their bleacher-bombing awesomeness are inside.

*For the record, I wouldn’t read too much into the blue pants appearing in the game. What that says to me is that Under Armour designed them for Auburn, might have made a set for Auburn, and maybe even wants Auburn to wear them. (The rumors had to start somewhere, right?) But that’s a long, long way from Auburn ever actually going through with a switch.

* Did an Auburn fan contribute to the teenage delinquency of Courtney Love?
* Auburn students stand in for Joaquin Phoenix, stars of Space Camp (1985)
* The G.I. Joe from Auburn
* Videographer behind AU hype videos wasn’t initially sold on “All I Do is Win”
* Two campy degrees of separation between Auburn and Swamp Thing
* I Survived the Kopper Kettle Explosion and all I got was this t-shirt
* “Alabama Polytechnic is the best…” for Eugene Sledge in HBO’s The Pacific
* The Ron Swanson Pyramid of Auburn
* The Auburn plaque in 1984′s Tank
* War Drobe Eagle: The Auburn shirt in Cannonball Run