Adapted from some not very good thing I wrote six years ago.

The picture was taken – no one really knows by whom – on August 21, 1991 at 202 Samford Ave., a house over 100 years old currently occupied (I think) by several Tri-Delts that call it the Corner House (as in “The Corner House Hearts Auburn”), just across the street from The Amsterdam Cafe, on one of those awesome 30-second stretches of Gay that look and smell exactly like it did when your parents drove it.

It gets forwarded around every few years to people who care about this stuff and ‘saved as’ and posted in Yahoo Groups file folders, and it was likely the holy crap hit that made any new scenesters in attendance think that the Auburn house show history photo exhibit in that basement at Ford Ct. a couple of years back was actually worth their time.

Yep, that’s Billy Joe Armstrong. He might have hooked up with someone’s friend that night, or maybe he was the dude that bought beer for all the Auburn High kids, or maybe everyone is just remembering everything wrong.

Yes, that guy with the mullet is Tre Cool. Story goes that he ate a God knows how old M&M off the floor at WEGL when they dragged the band down there for an interview on the station’s perennial punk show Mystery Playhouse and that it really freaked out some of the more mainstream DJ types who had actually been convinced to play some of their 45s and were actually diggin’ it and who had been planning on coming out to the show (but no, not now).

No, the first time Green Day plugged into Alabama Power wasn’t at a Birmingham concert hall in the mid 90’s, or the Huntsville armory or Montgomery or Mobile or freakin’ Tuscaloosa. It was a full four years before Dookie came out, one whole year even before Kerplunk. It was 19 years ago at an Auburn house show, a Wednesday night, and they played twice, in Stuart Ellis’ back bedroom. 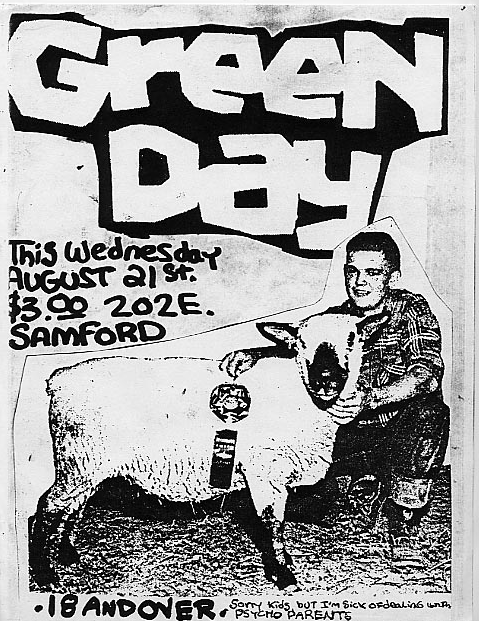 “It was a week night, and we didn’t want the cops to show up so we started the show early,” says Ellis, class of ’92, he of the Flaming Lips shirt, and the world’s foremost expert on Ethiopian jazz and Khmer pop. “At first, there was only a handful of people. I’d say maybe thirty, max. They got up, played their set. ‘Welcome to Paradise’ is the only song I remember. They played for about 30-40 minutes and they were done. Then, as they headed outside to get some fresh air, a whole mob of people showed up to see them. We were like, ‘Um, they just finished’. So, we talked them into doing another set. By then it was pretty crowded.”

The band’s van had been broken in to two nights prior in New Orleans, their clothes and cash stolen.

“They called and said they were driving to Auburn a day early,” says Ken Sanderson, who booked the show. Sanderson grew up in Auburn and eventually started his own record label in L.A., Prank Records.

“My parents are originally from New Jersey and I’ve never had a thick southern accent but for some reason I left a thick, drawled out message with directions for them on my answering machine as a joke. Tre Cool later said ‘man-that freaked me out… I didn’t know punks talked like that!’”

“They needed a place to crash and some food, and Mike Dirnt needed some clothes,” says Ellis. “So Ken called me, and I said sure. They stayed for a few days and Ken and I fed them.”

Tre Cool recalled the southern hospitality in a 1995 interview with the Birmingham Post-Herald (the band was playing Birmingham on tour in support of Dookie).

“It was cool,” Cool said. “We didn’t have no money or clothes, and everyone was donating clothes and, uh, and basically money.”

The Camper Van Beethoven shirt Dirnt is wearing in the photo was borrowed. The band got just over $200 bucks for playing, a lot of it tips to help them out. They stayed another day and hung out.

“They sat on Stuarts porch, Billie Joe playing acoustic guitar,” Sanderson says. “I think they completed a couple songs from their second album Kerplunk there.”

* Fantastic photos of Bjork inside Jordan-Hare Stadium
* Auburn buses still driving around Phoenix
* The Ten Best Auburn Games That Never Happened
* Behind the scenes at the New York City Heisman Tiger Walk
* The Mysterious Auburn Man
* Preacher from ESPN ‘Roll Tide’ commercial repents
* Sleigh Bells bring out the pompoms
* Yinging and Yanging in the Loveliest Village
* Baby, we were born to War Eagle — Springsteen in Auburn, May 13, 1976