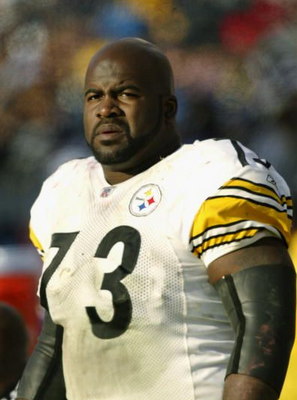 Kendall Simmons was a overpowering offensive tackle for Auburn earlier this decade. He was a first round pick (No. 30 overall), drafted by the Steelers in 2002. Converted to an offensive guard in the pros, he became a fixture on the Pittsburgh offensive line helping them win two Super Bowls. After an ACL injury in 2008 and two short stints with the Patriots and Bills, Kendall decided to hang the cleats up early and retire to the greatest place on earth, Auburn.

I had a chance to talk with him about his NFL days, his reasons for coming back to the Plains, and his thoughts about Cam Newton and the 2010 Auburn Tigers.

Thor: You played in the pros for eight years. You could have lived anywhere. Why come back to Auburn?

Kendall: I never left really, it’s always been home and one of those places where I have always been comfortable. We looked at Scottsdale, Ariz., where I trained and where my agent lived, but it would have been way too far from my wife’s family. In the end Auburn just felt like coming home.

Thor: What was so appealing about Auburn?

Kendall: Family feel, great nationally-ranked education for the kids and the people are great here. It has changed so much since I was in school. Just the people make such a difference. And we are centrally located and can get to anywhere quickly. Anywhere we want to fly we can drive to Birmingham or Atlanta. The beach is close; it’s just a great place to live.

Thor: You had a nasty injury in 2008. You tried to come back last year but ended your career. Did you just decide it was time to walk away, or is the fire still burning?

Kendall: I decided to, mentally I’m still in it, but physically it had taken a toll. It was a message God was trying to tell me and sometimes you have to willing to hear those messages. I can move on. I’ll have my times where I want to do it. I can’t even watch an NFL game right now. I can watch maybe a quarter, but then I have to walk out of the room and go do something. I struggled in New England (signed a three-year deal in September 2009 but was released in November 2009) because I was not myself. But in Buffalo (signed November 2009) I got my head on straight and then I tore my pectoral muscle in two places and was put on Injured Reserve. Mentally, it started to wear me out. Now I get to take my daughters to school every day. My wife says, I know you didn’t want it to go this way, but you couldn’t have picked a better year to retire because of Auburn’s season. It gets me my football fix, and she’s back helping with the Tigerettes. It’s really been a great transition to something that could have had me really down and being grumpy around the house.

Thor: What has Auburn’s season meant to you?

Kendall: Me personally, it’s definitely been good. I never realized how much of an adjustment you have to make once you have to call it quits and stop playing football. The coaches have let me come around and be involved with the team, and it’s definitely made up for a lot. And this team…  I’ve never been around a group of guys who don’t know how to quit.

Thor: Talk about Cam. What do you think of him as a college player and as a pro prospect?

Kendall: When I first saw him, I thought this guy is very intimidating and I was real anxious to see what he could do. In practice, it was always “what if” because of the quick whistles. Honestly, I questioned his throwing at first. But Cam has progressed so much as the season has gone on. This year he has learned how to play the game of football. He reads and throws, not picks one receiver, not runs immediately. He looks at whats going on and sees the whole field. He’ll translate pretty well to the pros. I think he has a strong arm and can make all the throws, and he’s so big and it’s hard to tackle him. Like Ben Roethsliberger, he’s going to be so hard to bring down. Ben wasn’t much of a runner, but he could still stand in there and throw the ball with a guy trying to tackle him. I’ve only been around a handful of guys with Cam’s kind of ability.

Thor: You played in the Super Bowl. What got you ready for such a big game?

Kendall: One thing that helped me out was that we had an older team. The older guys weren’t going to let the younger kids screw around. We had a chance to go back and play Indy (divisional playoffs) who we had lost to earlier that year on Monday Night Football, so we looked at it as an opportunity to beat them and we were completely focused and fully prepared to do it. Once we won that game we knew we were going to the Super Bowl and no one was going to stop us.

Thor: Oregon played in a BCS game last year. Is the SEC Championship a big enough stage to prepare Auburn for this huge game?

Kendall: I don’t think there’s any question about that. I really feel the kind of games that Auburn has played all year long has definitely prepared them for it. They always find a way to come back and win. The SEC Championship was the first time they played a full football game, from the kickoff they were clicking on all cylinders. And they really nailed the door shut in the 3rd quarter. I wouldn’t be worried about it if we played two weeks after, the only thing that makes me nervous is the long layoff before the game.

Thor: Auburn’s offensive line has a distinct size advantage in this game, but Oregon’s line is quick. Are we going to be able to just shove them around?

Kendall: Everyone was talking about Wisconsin’s big offensive line versus TCU’s small offensive line, and that didn’t work out the way they thought. But that was a bad example. TCU’s defense is head and shoulders above Oregon’s defense. If we play the way we’re supposed to they won’t be able to stop us.

Thor: You told me before that you’re going to the game. When are you guys leaving?

Kendall: I’ll be out there about eight days. We fly out on Wednesday and I think we are coming back the next Wednesday morning.

Kendall: That’s a good question: 41-35. I hope it’s more than that. I think they have some speed, but it all depends on which defense makes the most plays. If we can get them to punt a few times then I think we have a really good chance.

We hope to talk to Kendall again soon — maybe ask him some of those tough offensive lineman questions. If there’s anything you want us to ask him, leave a comment.