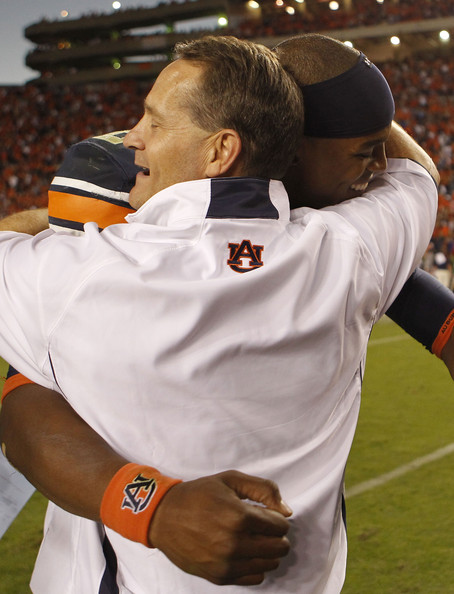 They told us — and many of us agreed, to our continuing shame — that Gene Chizik was a proven failure of a head coach. That he would fail again and make Auburn a failure in the process. That hiring him was like waving a white flag at the rest of the SEC that we only thought meant “Hey! Here we are again!” instead of “We surrender.” That 36-0 would be only the beginning of how things would go between that team and ours, their coach(bot) and ours. That SEC championships (to say nothing of national honors, since what sane person would say that?) would be totally beyond Auburn’s reach as long as Chizik was Auburn’s head coach. That Auburn’s time as a college football program that mattered had–for the foreseeable future–come to a close.

That’s what they said. They were wrong.

They told us that Chizik was a puppet of older, more powerful forces in the Auburn athletic department, forces that would install an entire staff’s worth of coaching has-beens and never-weres from the Dye and Bowden eras on Chizik’s coaching roster. That Auburn would become the most out-of-touch, out-of-date, just-plain-out-of-it program in the SEC overnight. Wrong.

They said Chizik’s choice for an offensive coordinator ran a high school offense that would never work in the SEC. That Gus Malzahn was a gimmick peddler who would be eaten alive by the defensive coordinators he faced in a big-boy league. Wrong.

They said Chizik would never be able to recruit, even once he’d filled his staff full of proven top-shelf recruiters. Wrong.

They said those recruiters were glorified salesmen who would never develop either the players they inherited from Tommy Tuberville or the ones they recruited. Darvin Adams and Lee Ziemba and Josh Bynes and Nick Fairley say in unison: Wrong.

They said Auburn would be lucky to break .500 in Chizik’s first season. Wrong.

They said Auburn would be run out of its own stadium in 2009 by a Tide team cruising towards a national title. Wrong.

They said Auburn was lucky to have gone 8-5 and without Ben Tate and Antonio Coleman and Chris Todd (yes, they said Auburn would be worse off at quarterback without Chris Todd, don’t forget this when remembering how deep the skepticism ran), they would run in place if not take a step backward. Wrong.

After he signed, they said Cam Newton was a true physical specimen but would never be smart enough or throw accurately enough to make the Malzahn offense work properly. Wrong.

Oh, and they said that that high school offense only worked because it took people by surprise, and that with a year of film those aforementioned defensive coordinators would shut it down. Very wrong.

They said our defense had been a Swiss cheese patchwork in 2009, and with Ted Roof at the helm and without Coleman, it would be even worse in 2010. Wrong. Not all that wrong, no, but wrong.

Three weeks into the season, our rivals still said Auburn said was “at best, the fourth team in the SEC West.” Wrong. (But guess who was?)

They said it was over for Cam, too. They said the NCAA had no choice but rule him ineligible. They said Auburn should beat the rush and just vacate their wins now. They said he’d never take the field again once the NCAA made its decision. Wrong, wrong, wrong.*

Not many of them said that Auburn would be upset by South Carolina, but a few did. Man, were they ever wrong.

And so here we are, at what feels like the end of all things, and finally, finally, most of them believe Auburn will win. Auburn is the Vegas favorite. Nearly every SEC fan I’ve seen — even those that have had their fangs bared in Auburn’s direction for months — believes that the game is Auburn’s. No one other than the true extremists is questioning how good Gus Malzahn is anymore, or whether Cam Newton can throw the ball effectively, or whether Gene Chizik can keep his team’s head in the game when things go badly. For the last month, they have been told more often than ever before that they can rather than can’t.

This would make me nervous if I didn’t believe so fervently that they will. I believe that Auburn remembers what they said. I believe they remember that they were told in no uncertain terms that tonight would never happen, that they were wasting their time doing so much as daydreaming about the crystal football they will play for the right to own.

*Yes, the roof could still cave on this point, but every day that passes without the army of reporters out there digging into it makes it less likely, no? I’ll take out chances, thanks.