We neglected to post Predict-O-Nomics last week… which is a shame: The Model was uncannily accurate. Sadly, if the uncanniness holds, Ohio State will finally beat an SEC team by 1 pt. His final bowl preview will be posted on time.

Each at 7-5 and 4-4 in conference, Florida and Penn State have had disappointing seasons.  Each program began the year in the top 25, but neither could compete with the elite programs in its conference.  The Outback Bowl will give each a chance to salvage the season.  Penn State’s Paterno is 3-0 in the game, and is playing in his 25th bowl game.  Florida’s Urban Meyer is coaching in his final football game at Florida after leading the Gators to two National Championships.  While Florida has the decided home field advantage (the game is played in Jacksonville, FL), the Gators have struggled in games against top competition.  While it’s unclear how good Penn State is, the Nittany Lions have managed to keep games close when not facing the Alabamas and Ohio States on their schedule.

Florida has looked mediocre at best against anyone with a pulse, running up the score against Vanderbilt, Kentucky, and Appalachian State, but getting hammered by Alabama, South Carolina and rival Florida State.   The Model is predicting a win because Florida has a more dynamic offense (29.2 vs. 24.6 points per game) and a better defense than Penn State (21.1 vs. 22.6 points allowed per game).  Look for a big game from Florida quarterback John Brantley and a rebounding win in an otherwise disappointing  season for the Gators.   Prediction:  Florida 33 – Penn State 18. 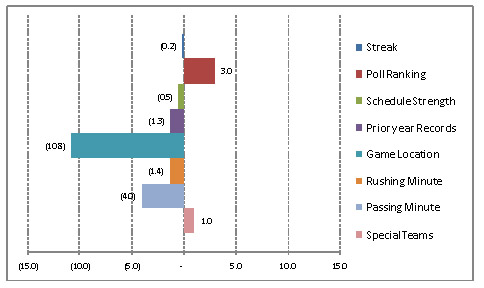 Many analysts feel that Alabama is still one of the top 5 teams in the country, despite the Tide’s three losses this season.  Vegas concurs, listing the 9-3 Tide as 10-point favorites against the one-loss Spartans.  Michigan State went an impressive 11-1 this season in conference play, in a season where the Spartans did not get a chance to face off with the best the Big Ten has to offer in Ohio State.  While the Spartans did manage a 34-24 victory over an otherwise unbeaten Wisconsin squad, the majority of their conference wins were close calls —  Penn State, Purdue, Northwestern, even non-conf foe Notre Dame all were a play or two away from beating the Spartans.  Alabama has played three close games, beating Arkansas but losing to both Auburn and LSU. 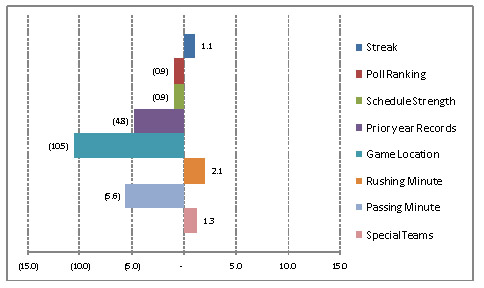 With a predicting of Mississippi State by 12, The Model has reached new levels of SECism with this game, or has it?  On the surface, holding Michigan’s spread offense led by Denard Robinson in check for four quarters would seem to be a tall order.  Robinson has nearly 4,000 yards of total offense (2,316 passing  and 16 TDs, 1,643 rushing and  14 TDs), which sounds pretty impressive until you remember that the Bulldogs have already faced the nation’s best dual threat quarterback in Cam Newton and limited his production as much as anyone this season has.

The Bulldogs will be well prepared for Michigan, whose porous secondary will make Bulldog quarterbacks Chris Relf and Tyler Russell look like all-Americans.  Michigan’s secondary is young, inexperienced, and thrives on giving up big plays in the passing game to the tune of 8.8 yards per attempt and 260 yards per game.  The good news for Michigan is that Mississippi State is not particularly adept in the passing game, throwing for only 178 yards per game.  The bad news for Michigan is that the Bulldogs love to run the ball, something Michigan is equally poor at defending.  Michigan plays a 3-man defensive front and absolutely refused to modify their defensive formation to better defend the run.  Anyone with some talent and commitment to rushing the football will have success against the Wolverines.

Michigan relies on trading possessions and scoring in the high 30s to win ball games.  If Mississippi State gets trapped in a shootout with offenses trading touchdowns, the Bulldogs could be in trouble.  Their best strategy will be to limit Michigan’s offensive possessions, control the clock, and hit Denard Robinson on every play.  If the Bulldogs can follow this blueprint that worked to perfection, they should be able to not only win, but cover as well.   Prediction:  Mississippi State 35 – Michigan 23. 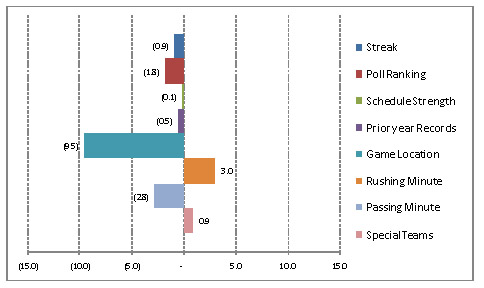 Ohio State lost twice when Wisconsin got the big to play in the Rose Bowl – no cushy matchup against a non-automatic qualifier, instead the Buckeyes get to face a team from a conference they can’t seem to beat – the SEC.  Ohio State is 0-3 in BCS games against the SEC, losing twice (in poor performances) in the National Championship game. Overall, Ohio State is 0-9 in bowl matchups versus the SEC, though they are field goal favorites against Arkansas who is making its first BCS appearance.

Both teams have explosive offenses led by two of the best quarterbacks in college football – Ohio State’s Terrelle Pryor and Arkansas’s Ryan Mallett.   Mallett and the Razorback offense is clicking like never before, averaging 489 yards per game and 37.3 points.  Pryor’s Buckeyes are equally impressive on offense (449 yards and 39.4 points), but perhaps more so on defense.  The Buckeyes    allow just 13.3 points per game and 252 yards per game, one of the top defenses in the nation.   Arkansas allows 22.8 points per game overall, or 19 points per game against teams not led by Cameron Newton.  The Model picked Ohio State to win by just .3 points, so the game should come down to the fourth quarter.  Mallett and Arkansas have struggled putting away big games late, but Pryor has played poorly consistently throughout his career in big games.  The edge goes to Ohio State, but The Model likes Arkansas to cover.  Prediction:  Ohio State 31 – Arkansas 30. 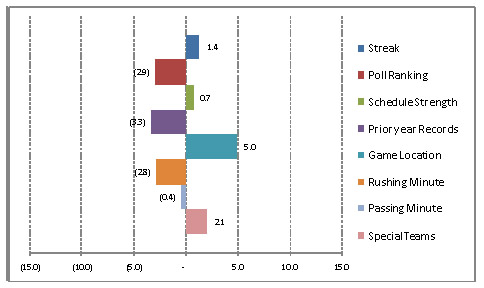