The We’ve-Never-Seen-It-And-Therefore-It-Was-Perfect Because We-Have-No-Basis-For-Comparison Review of the National Championship Celebration. The War Eagle Reader asks me to compile my tweets for posterity’s sake. And since they’re so kind to do so I add a few thoughts after the fact, which are bolded below.

Think of that feeling of the opening weekend of the season. Players are perfect, the sun has been shining, your kids are darling and the tailgating is top-notch. Anything is possible and the opponent isn’t one you’re really very concerned about. You’re just full of optimism about what you’ll see that season. It is a carefree feeling, heading inside when it isn’t LSU or Georgia or Alabama across the way. That’s a great way to walk inside the old stadium. This was like that, but perhaps better, maybe happier. You didn’t get to see the Tigers play, but you got to celebrate all the same.

At the national championship celebration. (With about 45,000 others.)

We walked in about 45 minutes early and caught the end of the BCS game replayed on the big screen. The crowd was still streaming in, the students (and others) were filling up a significant section of the field. The championship logo was brilliant. There was ice in the upper deck.

We sat near the place where we sat when I took my wife to her first game. (As an out-of-stater, she declared her allegiance after Tiger Walk that night. I had the good sense to marry her a few years later.)

There are hundreds of little stories like that tied into this experience. Most of them, sadly, will never be heard — unless you leave yours in the comments below. 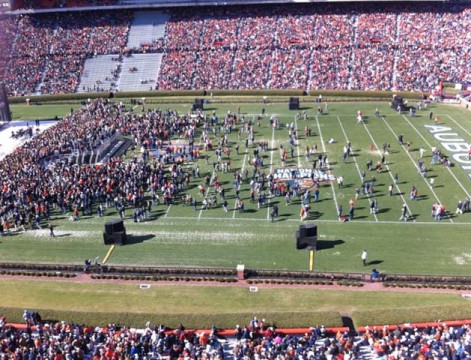 They should clear the field and recreate the final drive.

It was obvious they weren’t going to fly Nova — or Tiger, since this was as much about history as it was about the present — because of the crowd. But in my undying attempts to add to the pageantry I’ve come up with an alternative plan. Instead of landing at midfield, they should fly the eagle from the north end of the stadium, over the admiring crowd and then atop AUHD. The eagle would then grab the rope from the flag pole firmly in a talon and then hoist a championship flag into the sky.

The champion Tigers are about to take the stage set up at Jordan-Hare. There must be close to 60,000 people in here.

And they just kept coming. I finally and officially guessed somewhere in the neighborhood of 70,000. I’m guessing that others that picked a number out of the air are likewise not crowd estimation experts and so I’ll disagree with their 78,000 figure. The number doesn’t really matter once you get beyond that threshold of A LOT.

Gogue recalls Jan 10, 49BC, and discusses Julius Caesar crossing the Rubicon. Apparently Caesar said “All in.”

Gogue, perhaps, wasn’t just offering a history lesson because he’s the president and felt the need to be academic. Caesar blew into a trumpet, crossed that river and, according to Roman historian and biographer Suetonius, said “Let us go where the omens of the Gods and the crimes of our enemies summon us!”

And then he said “aquila di guerra.”

Having explained what War Eagle meant, he then began to build the Roman Empire.

Caesar, that day, is thought to have also uttered that famous phrase “Alea iacta est,” which has long been interpreted as “The die is now cast.” And so, I guess, it is. Let Tide fans and Hannibal have their elephants. Apparently Auburn is Rome. Rome defeated Hannibal.

Dr. Gogue is an ambitious man.

(And you don’t get this kind of football analysis on just every site.)

Gogue: Auburn was 14-0 and at every one of those games two great teams were on the field, the Auburn offense and the Auburn defense.

Apply that to whomever you’d like as a playful dig and admit it, you like Gogue just a little bit more now.

Gov. Bentley is here. He almost issued an executive order a football game be played today.

Gov. Bentley says the entire country is “fascinated by the orange and blue.”

This is a celebration and not political, of course. Bentley has a responsibility to both Auburn and Alabama. So while I’ll share a little Italian I won’t get involved with your politics. But. A fellow alumnus said “He’s a Bammer and thus not my brother.”

Individual player intros, with the seniors last. So far the biggest pops have been for BCS (offensive) MVP Mike Dyer and Philip Lutzenkirchen.

Gus Malzahn’s wife retweeted this, and so did several of her friends. She spoke highly of Fairley. Who are we to disagree?

Cam Newton is the fifth Beatle.

They apparently told Newton, or the team at large, that the crowd wasn’t that big. I bumped into Newton at an area restaurant after homecoming. That guy has been in a crowd for a long time. Not sure why this surprised him.

Gene Chizik comes out in long coat and blue jeans, pretty casual for him. Players on the stage, and now for the speeches.

Jay Jacobs just thanked the Board of Trustees for “latitude.” Where am I?

They weren’t in my line of site, but I’m assuming they all got rings and were wearing pads and eye black.

Auburn mayor stands up and thanks everyone for the day’s economic injection. Did I mention the RVs are here?

Mayor Ham: “This celebration is for Shug Jordan.” The man knows, that’s why they re-elect him.

And now Housel is reciting his own “What is Auburn?” passage. Quoting oneself is always a little awkward.

The man is as erudite as they come, so this was all a bit deflating, honestly. Not to worry because …

They showed video from the perfect 1957 national champions. Dr. Lloyd Nix, that team’s quarterback is stealing the show.

Maybe it says something about the award, or the individual, or maybe a little bit about both, but that’s one happy little scene that took place down in the south end zone. He’s had that trophy for a while now, but everything still seemed kind of new.

Stan White and Randy Campbell “present” Cam Newton his Heisman. Both (Newton and Fairley) spoke. Fairley is a clown.

Newton: “There is a reason Coach Chizik has been undefeated not once, not twice, but three times in the last seven years.”

You think they’ll be playing that clip to the high school recruits?

“Hello, young man. My name is Gene Chizik. I’m the coach of the national champion Auburn Tigers. Perhaps you’d like to see what a Heisman trophy winner says about me.”

Five Super Bowl rings are on the stage right now. No big deal.

The Fiesta Bowl representative just invited Auburn back. There were many witnesses.

Somewhere in all of this Gordon Stone, the president of the Letterman’s Club turned to the team and spoke. I can’t recall much of what he said, I was too busy tying up the laces on my Under Armour cleats. (I don’t have any Under Armour.)

Everyone quiet. Kodi Burns is about to speak. They are chanting his name.

I’m predicting they name one of those springtime team awards after Burns before long. The story and lesson are both just too good to ignore.

Burns: “I came to Auburn for two reasons. One, because of the Auburn Family. Two, to win a national championship.”

Lloyd Nix, of the 1957s, is bringing out the crystal football. Good form, too.

Four points of pressure. No swagger, just a casual determination befitting a man who’s committed his life to improving the world around him. Google Dr. Nix and be impressed.

And now Gene Chizik … calls his the best coaching staff in America.

Chizik: “This is a journey … This is about a very selfless team.”

Journey, process. Family, factory. Romans, Carthaginians. You figure it out.

Chizik says he wanted Newton and Fairley as BCS captains, but they turned it down saying seniors should get the honor.

Chizik: I will say it again, and it’s not kinda, sorta, almost, you are the best fans in America.

They played the season’s highlight video and all the players stood to watch @AUHD.

I suspect that it will make its way online eventually, but doesn’t seem to be up as of this writing.

And now over the scoreboard is a national championship flag. 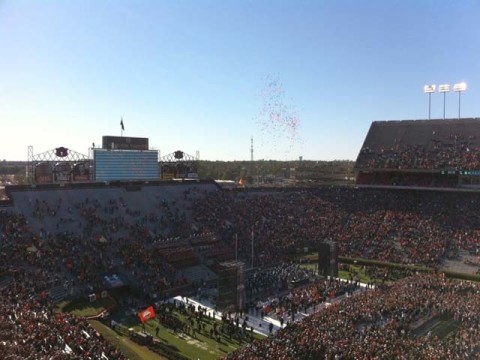 I told one friend online that it was just about a perfect event. It had nice portions of a fun and playful atmosphere. There was humility and gratitude and just a little red meat for the fans. The players that spoke were silly, happy and nostalgic already. Reverse Tiger Walks are cool. Rolling Toomer’s again was a bit much. On a crisp January afternoon, though, Auburn students, alumni and fans had one more chance to come together and enjoy this team. Gogue and Jacobs and Chizik may see great things coming — and maybe they are right — but this season, for many, will always be a peerless experience.

It is a shame the eagle didn’t raise that flag, though.