Saturday was the 33rd anniversary of the Kopper Kettle explosion. TWER looks back on the era-defining trauma-rama with the help of some never before seen photos and old newspaper clippings – first in a three-part series. Check out our giant gallery of unpublished photos here. And ABC News coverage of the blast here. And a song about the whole thing here. 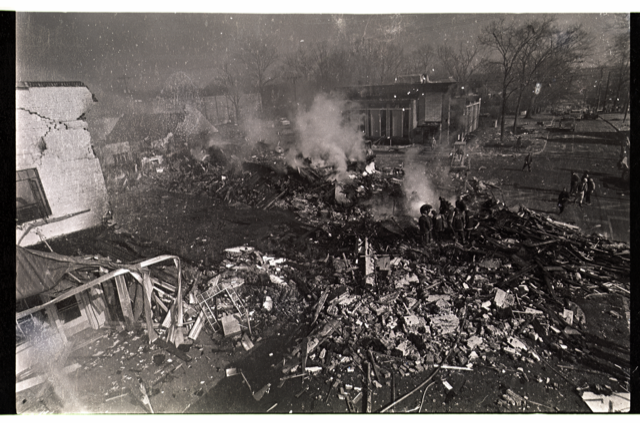 On Sunday morning, Jan. 15, 1978, half a block of businesses on East Magnolia Ave. in downtown Auburn blew the hell up (kapow, boom, war-zone), chief among them in the minds of those that remember the aftermath and write blurbs about it in the sidebars of regional magazines and annual remembrances in newspapers, the Kopper Kettle.

The explosion was caused, best anyone could figure, by a gas leak somewhere underneath one of the stores or restaurants (likely the Kettle), and it seriously was like a bomb went off, packed with the punch of at least 100 pounds of explosives it was later estimated.

“I ran as fast I could for the truck to call the men on the radio and tell them the town had just blown up,” Lt. Tamp McDonald of the Auburn Fire Department told the Opelika-Auburn News. McDonald was rounding the corner in an El Camino, investigating a strong gas smell, when it did. A shot of him is the photo the Opelika- Auburn News ran for their Monday cover. It was taken by Brad Ashmore, the paper’s main photographer. I tracked Brad down a few years back and he gave me a box of his old negatives. Inside were rolls marked “Kopper Kettle”–a dozen of them.

I finally scanned them. Most have never been seen before.

The Kopper Kettle became the Kopper Kettle sometime in the early 1960s, this 24 hours-ish greasy spoon type place that served breakfast all day and hosted frat boy ketchup fights all night (which got so bad they finally became a fine-able offense: $100).  It stopped being the Kopper Kettle at 8:13 that Sunday morning, at least that’s the time Rev. Charles Britt remembers showing on the Central Bank clock at Toomer’s Corner. Had his last red light, at the corner of Gay and Magnolia, lasted 10 more seconds, he would have been killed. And had attorney Andy Gentry’s wife not asked him to stay home with the kids that morning instead of going to his law office upstairs at the Brownfield Building (which he owned, and which was completely destroyed), he would have been killed. And had it happened 17 minutes later when everyone was arriving to hear Britt’s sermon at Auburn United Methodist Church just down and across the street from the Kopper Kettle, a lot of people probably would have been killed or at least seriously injured because the blast shot shards of 90-year old stained class into the walls like throwing stars. Thank God no one was there, because obviously it’s horrible when people get killed in horrible, freak accidents like that… but also because the story just wouldn’t be the same. People wouldn’t be able to use it as a conversation starter, at least now with the same tone. It wouldn’t be a message board point of “I was there” pride. Shirts couldn’t have been printed up. Songs couldn’t have been recorded.

If even one person had died—or really even just injured, which no one was—you wouldn’t be able to talk about the timing. Or you would, but it wouldn’t have the same impact, as it were. The timing is what makes it—how does a Sunday morning blast that jostles the bird feeders of old women seven miles away, that shatters windows out of at least 70 businesses, that blows dental chairs three stories into the air, that blows dental records six miles away, that gets a small college town on national news that night (which a vacationing Dean Foy saw on T.V. while watching the Super Bowl up in Aspen), that knocks my mom out of bed upstairs at the Baptist Student Union a block away and makes her think (thanks to the mushroom cloud) that the Russians are attacking (because take out Auburn and you take out America), that makes my dad think that God is talking to him, telling him he should maybe change the guest sermon he was writing for First Baptist Church down in the church’s basement… how does something like that not kill someone? Someones? How are there not bodies in the streets?

Of course, some of the first responders thought there were. That’s actually one of the story’s you hear with it–that the firemen rounded the corner and had an oh, the humanity moment… before realizing that the charred torsos and dusty skulls they saw were just mannequins (oh, the humannequins) from Imperial Formal Wear and Parker’s clothing store, which was going out of business anyway.

Another is about the other attorney with the law office upstairs whose diploma — true story — landed more than a mile away in his mother’s front yard. (Mom always led with that, which means I did, too, and no one believed me, but sure enough, The Plainsman confirmed it.) There’s also the “Close Encounters of the Third Kind” thing — it was playing at Village Theater, one of the places completely gutted. The only complete line left on the marquee was “We Are Not Alone.” So if wasn’t the commies, maybe the aliens.

National Guardsmen were called in and Alagasco sent an army of workers to solve what needed solving and they cut off gas to hundreds of residents, most of them students who half froze through the night thanks to temperatures in the 20s). People smelled imaginary gas leaks everywhere for weeks. And then… that was it.

The introduction to that year’s Glomerata: “The calm of the year seemed interrupted only by the gas explosion in town Other than that students continued participation in a dance marathon, club and social gatherings or just pursued personal interests.”

Vietnam was over. Streaking was over. Football sucked. Elvis was dead.

Check out our extensive gallery of Brad Ashmore’s never before seen photos from the day of the explosion here.