For this week’s pick, I’m debuting Model 2.0 because quite frankly The Original Model’s prediction was a little upsetting. I’d like to stress that I did not introduce any bias or favoritism into Model 2.0, I did, however, rework exactly what I am modeling.

The Original Model is a regression model where my variable of interest (the “dependent variable” in geek speak) is the margin of victory for the home team. When the home team wins, this margin of victory is positive. When they lose, it’s negative. Basically, The Original Model assigns optimal weights to different variables based on how historically important they have been.

Model 2.0 takes a different approach, essentially creating two models — one for the home team’s expected score, the other for the away team’s expected score. I then subtract one from the other to calculate the predicted margin of victory. The advantage, I believe, of this methodology is that two models allow a more thorough and less averaged approach to understanding which variables about each team affect the offensive and defensive output.

Each of the charts below compares Auburn and Oregon’s season-to-date statistics. The national ranking is also provided. For example, Auburn’s scoring offense is putting up 42.7 points per game, which is ranked sixth nationally. For each section, I’ll briefly discuss the charts but will dig in deeper too, revealing which statistics are potentially misleading and which will likely have the most impact on the game’s outcome.

Everyone knows that Auburn and Oregon have two of the most explosive offenses in the country. In absolute terms, Oregon appears to have a superior offense — outrushing, outpassing and outscoring Auburn. However, when these metrics are standardized on a “per play” basis, the results swing in favor of Auburn.

Oregon averages 20 percent more plays per game than Auburn — something unlikely to occur in the big game. Oregon’s offense has, however, been more consistent throughout the year than Auburn’s — something both teams will be concerned with coming off more than a month’s rest. 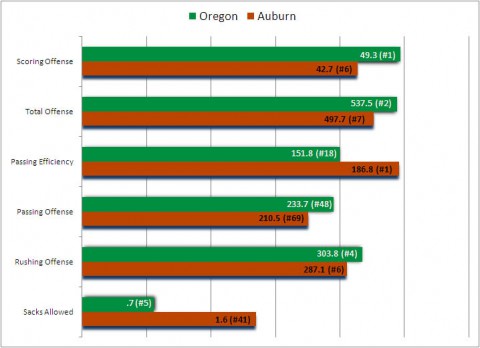 On this side of the ball, the edge goes to Oregon, and it is not even close. Oregon has the nation’s No. 14 scoring defense, allowing 18.4 points per game. Oregon’s defensive numbers are better than Auburn’s in every category except rushing defense, where the two teams are remarkably close.

In summary, Oregon’s total per-play defense allows 15 percent less yardage and 30 percent fewer points per play than Auburn’s. Oregon’s passing defense is particularly stingy, allowing 214 yards per game in the pass-heavy Pac 10, and sports the nation’s No. 6 passing efficiency defense. Fortunately for Auburn, Cam Newton leads the nation in passing efficiency and with an average (by Cam’s lofty standards) performance will set the NCAA single-season record. 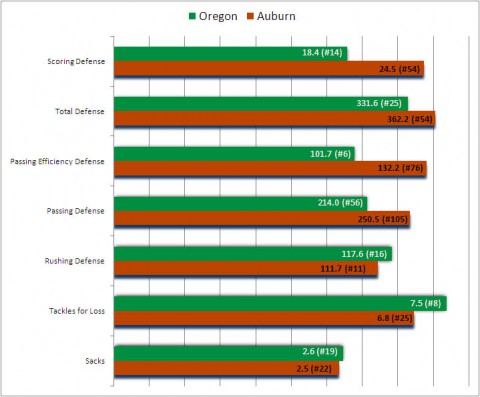 Special teams could play a role in this game, but not to the extent that many are thinking. It is true that Oregon has the best punt return game in the country, but those inflated statistics are based on very few actual returns (37). Auburn has allowed 8 returns of punts all year (for 44 yards). There is some method to the madness in the punting game this year, namely, play it safe, cover punts and don’t get burned by the big return. There is no reason to think Auburn is going to put itself in a position to get hurt by Oregon’s dangerous return game, but no one expects a lot of punting by either team.

Each team has excellent kickoff return coverage — allowing about 20 yards per return, which is impressive given the number of times opponents get the opportunity. Hope for, but don’t expect, any big surprises in Auburn’s kickoff return game.

Oregon has given the ball away in every game they played (except UCLA). In fact, they have turned the ball over two or more times in 8 of their 12 games. Auburn has had multiple giveaways in 4 of 13 games.

Oregon has built its reputation for turning over opponents (No. 1 nationally at 2.9 turnovers forced per game) primarily on interceptions. The majority of those interceptions came against sub-.500 teams. However, Oregon did manage a pair of interceptions against Stanford’s QB Andrew Luck but none against Washington’s QB Jake Locker, so the jury’s still out on how the Oregon secondary will perform against top-tier competition like Auburn.

In terms of schedule strength, Auburn’s opponents have won 64 percent of games (excluding losses to Auburn), whereas Oregon’s opponents have won 50 percent of games (excluding losses to Oregon). Auburn has defeated three 9-win teams and three 10-win teams. To the Ducks’ credit, they have defeated a 12-1 Stanford team, but the next best win on their resume is a tossup between bowl-ineligible Southern Cal (8-5, 5-4) and Washington (7-6, 5-4). Auburn has not had the dominating performances against mediocrity upon which Oregon’s undefeated season was built. Auburn has faced and defeated nine teams with winning records and has needed more than its fare share of comebacks to remain unscathed. 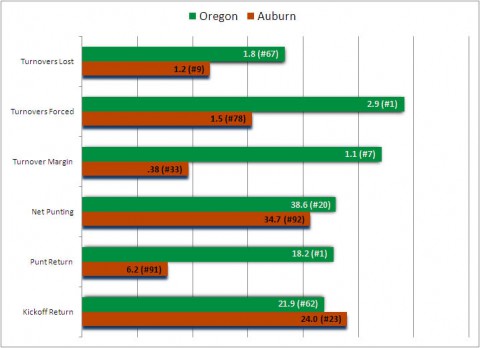 Both teams are very efficient converting 3rd and 4th downs, but only Auburn is converting at the rate of a national champion. Auburn is ranked No. 3 nationally in third down conversion and No. 12 nationally in fourth down conversion compared to Oregon’s No. 22 and No. 27 respective rankings. Both teams are fairly comparable in the red zone, with Auburn having a slight edge.

The game could ultimately be won by whichever team lives up to its billing on third and fourth down. If Auburn is able to convert 40 to 50 percent of its third down attempts, the Tigers will be able to maintain possession and more importantly keep Oregon’s offense on the sidelines. If Oregon manages to force Auburn’s offense off the field with any regularity, the Tigers’ defense will be in the unenviable position of having to slow the quack attack. 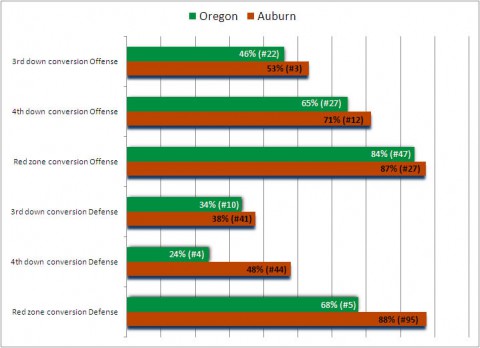 The Original Model predicted a close game, but an Auburn loss. Model 2.0 is predicting an even closer game and an Auburn win. For the later to happen, the Tigers will need to control the pace of the game and avoid the temptation to get into a shootout. Auburn’s normally stout second-half defense will need to make a rare first-half appearance and force more than a couple of punts. You can bet that Auburn Offensive Coordinator Gus Malzahn has prepared a well-balanced attack for this game, and ball control and time of possession will be critical factors. Auburn’s chances of winning grow substantially if the Tigers play turnover-free ball, something only Washington and California have managed to do against the Ducks. Ultimately the game should come down to a matchup of two excellent quarterbacks — Cam Newton vs. Darron Thomas.

All season, the Auburn family has been “all in” with Cam Newton. The man wearing No. 2 has kept his focus through one of the most tumultuous seasons a student athlete has ever faced, and led Auburn to a No. 1 ranking and the biggest Auburn football game in recent memory. Newton may need to play a near-perfect game for Auburn to win Monday night, but if anyone can do it, Cam can. 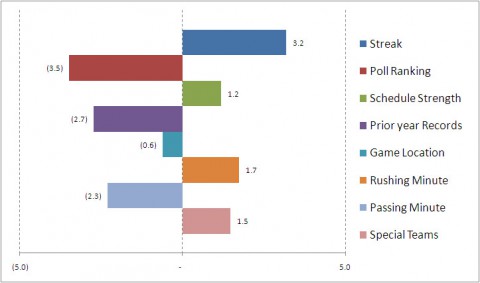 Mac Mirabile is a 2002 graduate of Auburn’s economics and journalism departments. During his time at Auburn, he was a copy and photo editor with The Auburn Plainsman. He has a master’s degree in economics from UNC-Chapel Hill and has written numerous academic publications on college football, the NFL and gambling markets. His previous column can be found here. He can be reached at [email protected]