Those Auburn fans who voted for “All I Do is Win” as the soundtrack to this year’s tunnel entrance video apparently knew something about this season. All we did was win. And win and win and win. So much so, and in such a grand and exhilarating fashion, that DJ Khaled’s Auburn-copped anthem, much to the initial dismay of some, became the song of 2010 Auburn football.

Alan Brazzell just wasn’t sure if it would.

“I knew it when I was editing that the song was the make-it or break-it point, but I wanted to make sure I did the fans justice and to make that song in a video form that fit Auburn,” says Brazzell, a freelance videographer and the tingle titan behind the hype videos featured in Auburn’s pre-game experience, arguably the best in college football. “It kind of had a little more of the ‘other school’ feel. It just didn’t feel very Auburn when I first heard the song.”

Brazzell, a 2007 Auburn grad in RTVF (radio, television, and film), played in the Auburn University Marching Band, occasionally filming and editing highlight reels and end of the year commemoration videos.  In 2006, band director Dr. Rick Good asked him to edit a minute-long video to potentially show on Jordan-Hare Stadium’s giant video board before the band’s pre-game entrance.

“I think it was the Florida game in 2006. Marketing groups saw it and liked it and decided to show it and it got a huge crowd reaction and played the rest of the season,” Brazzell says. “There’s been a band video ever since.”

He now serves as the band’s official videographer. 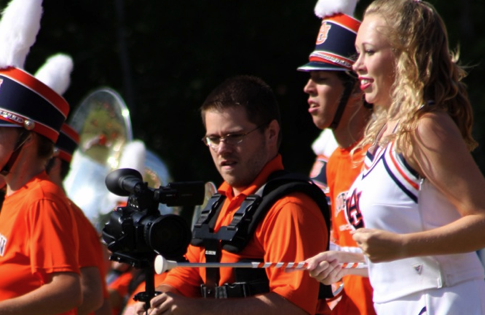 During the summer of 2009, he was promoted from unofficial distributor of joyous jitters to official goose-bump general when he was hired by AUHD producer  Bo Cordle through Daktronics, the company that operates the video board, to shoot and edit videos for various Auburn sports.

He has become gameday’s go-to video editor, but “All I Do is Win” was one of his biggest challenges. It was also one of his greatest triumphs.

“When I was working on the song edit, I wanted to emphasize the things that were very Auburn,” says Brazzell, who struggled to find a counterpoint to the song’s “pompous attitude.”

The song’s first verse includes the line: “All I do is win… no matter what / Got money on my mind, I can never get enough.” Later verses not used in the video include references to drugs and “strippers’ booties.”

How do you temper the lyrics of Ludacris and Snoop Dogg, both of whom are featured in the song (and not exactly known for their family friendly lyrics)?

“That’s what kind of led me to introduce it with the Chizik speech, because to me that really was what Auburn was about,” Brazzell says. ‘This place was great before you got here, and we’re not going to let our people look at us and let them down.’ And that really fused the family and tradition, and at the very end thanking the fans as the greatest fans in the world. I was really kind of making sure it wrapped back around to what Auburn really is.”

It worked. Alumni went from head-scratching, arms-crossed confusion during the season opener against Arkansas State — Kids these days with their hip and their hop. — to sustained, choreographed hand raising (“up, down, up, down”) before the Georgia game. “All I Do is Win” became both the prelude and punctuation.

Along with the two football hype videos (the second being the “inspirational video” signaling imminent kickoff, which uses a song from Inception), he also edited videos for gymnastics, soccer, both basketball teams, and is currently working on baseball’s pre-game video.

“On the field filming when they come out gives me chill bumps. Not just because it’s my work, but I’m a part of something,” Brazzell says. “It’s a contribution to the Auburn family. It’s not just my job; it’s also a labor of love. It’s my school; it’s where my heart lies. And I like giving back, even if it’s just in the form of a one-minute video.”