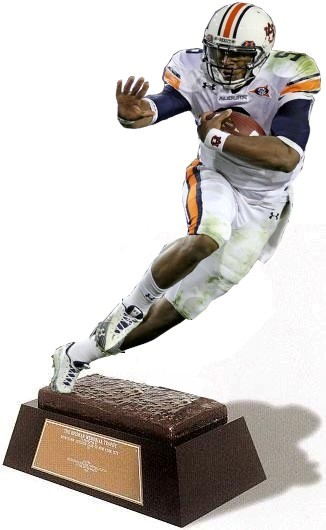 This Saturday night the Heisman Trophy will be awarded to the NCAA’s “most outstanding college football player.” Cam Newton is the overwhelming Vegas favorite to win the award. In fact, most sportsbooks are no longer taking action on the award — perhaps because its winner is a foregone conclusion.

Newton would be the third Auburn player to win the award, joining SEC legends Pat Sullivan (1971) and Bo Jackson (1985). It has been a long time since anyone from Auburn was even considered for the Heisman. Auburn’s Jason Campbell finished 7th in 2004 and Rudi Johnson finished in 10th place back in 2000.

Newton’s season at Auburn has been epic. The records he set this season may stand for decades. He is currently leading the nation in passing efficiency and could well set an NCAA single-season record depending on his performance in the national championship game. His 49 total touchdowns are more than the season totals for 86 different teams. His 294 points are more than the season totals for 44 teams. Newton’s domination, passing and rushing, are paralleled by only one other Heisman winner — Tim Tebow (2007).

The rest of this piece will compare Cam Newton with the last 13 Heisman Trophy winning quarterbacks.

• Newton’s passing efficiency leads all Heisman winners — in fact, his 188.2 rating is 20 percent higher than the average winner.

• Newton’s average yards per play of 8.19 ranks No. 4, higher than Tim Tebow, but below the pass-happy offenses led by Sam Bradford, Chris Weinke and Danny Wuerffel.

• Newton’s total offense per game of 307.5 is about average for Heisman winners, but his total touchdowns per game (3.77) ranks fourth.

• When calculated on a per-play basis, Newton’s touchdowns per play of 0.10 ranks second behind Sam Bradford.

• On average, Newton scores a touchdown once every 10 times he touches the football. That is about 30 percent more efficient than the average Heisman trophy winner.

• Newton’s 49 total touchdowns (and counting) are good for 3rd place among Heisman-winners — he would need six TDs against Oregon to tie Tebow and Bradford’s record of 55.

Comparing Newton to these Heisman winners is not as straightforward as it may seem. Newton is an elite quarterback with the mobility and instincts of a running back in the body of an NFL tight end. While his success is due, in part, to a well-balanced offense and a senior-laden offensive line, his numbers are not overly inflated from a pass-heavy offense. For these rankings, I chose to use standardized (per game or per play) metrics that reflect the importance of passing efficiency, total offense and touchdown production from the quarterback position. Ultimately, it proved too timely to take into account schedule strength, leadership, percent of offensive production, etc., though these things certainly color any discussion in determining the best of the best.

Cam Newton came out second in my evaluation — a fitting ranking for the man wearing the No. 2 jersey who led the Auburn Tigers to a No. 2 ranking throughout much of the season. Neither Bradford nor Tebow, Newton’s biggest competitors, won the BCS title in their Heisman seasons. If Cam & Co. take care of business on Jan. 10, I imagine we will begin hearing claims that Newton had the best single season performance in college football history.

Mac Mirabile is a 2002 graduate of Auburn’s economics and journalism departments. During his time at Auburn, he was a copy and photo editor with The Auburn Plainsman. He has a master’s degree in economics from UNC-Chapel Hill and has written numerous academic publications on college football, the NFL and gambling markets. He can be reached at [email protected]