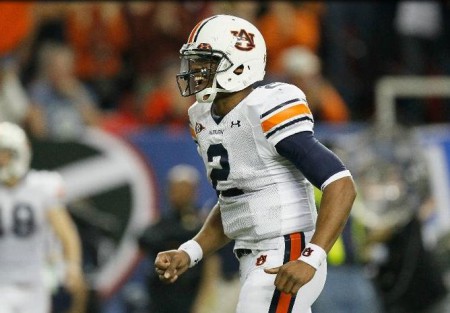 I’m happy, deliriously so, that Auburn won. I’m beyond happy for Cam Newton, who’s been made to be the world’s most joyful villain.

But I’m happiest of all for the seniors on this team, the guys who played out the horror of 2008 and were still here to get showered in confetti after that game. Lee Ziemba, who clocks in every week and plays his guts out and mauls people has been thanked by being the false start guy. Berry and Pugh and Isom. Terrell Zachery. Craig Stevens. Mario Fannin. Josh Bynes, are you freaking kidding me. Zach Clayton, finally healthy. Zac Etheridge. Zac Etheridge.

Kodi Burns. He stood out there on that field and was covered with little bits of colored paper, every one of which read “You are a champion. You, Kodi.” Because he is. He always will be.

That makes me so happy I could cry. I’d like to thank Gene Chizik and Gus Malzahn and the rest of Auburn’s amazing staff for so many things. But giving these players the opportunity to win this championship is what I thank them for the most. War Eagle to them. War Eagle to this remarkable team. War Eagle to all of us, to all of this overflowing joy.

(One other thing: spare a thought tonight for the folks at TCU. Six years ago, we were them: sitting around, hoping [praying] someone would help us, seeing other teams come so close to doing what we so desperately wanted, and one-by-one all of them only tempting us, only breaking our hearts, as our team had to deal with a nice consolation prize. If there’s any Horned Frogs reading out there: we got ours eventually. Hope you guys do too.)

— On the one hand, last week’s game was so emotional, so cathartic, so this-will-never-be-topped in terms of drama, you have to wonder if there’s any way Auburn doesn’t let down. Of course, that was what we said after the Arkansas-LSU back-to-back, and our Tigers destroyed Ole Miss in a game that didn’t have anything like the big-game feel today’s game will have. I’m not worried. Well, not much.

— Matchup of the game is Carolina’s defensive line against Auburn’s offensive line. Last go-round, Ziemba-Berry-Pugh-Isom-Mosley annihilated them, even though the ‘Cocks have  an excellent front still ranked in the top 10 in rush defense despite the 334 yards AU hung on them. Back then, Cam was shaky enough as a passer that if you slowed Auburn down on the ground, you could really throw a wrench into things (ask Mississippi State). But the way he’s throwing the ball now, going against a Carolina pass defense ranked 100th in the country (almost as bad as ours!), the ‘Cocks have no chance if they get murdered up front again.

— It’s a shame we’re facing Steve Spurrier, because most coaching staffs with Marcus Lattimore would try to force-feed him the ball even though the best way to attack Auburn’s defense is to basically go the full Hal Mumme and throw on every down. (See: Georgia, Alabama in the second half.) Spurrier loves airin’ it out enough that he might just do it, though. That’s one thing that genuinely worries me. The other …

— … is that Auburn is now an incredible 5-0 in one-score games (6-0 if you count the first meeting with the ‘Cocks). Those are games where one bounce, one call, one breakdown swings the outcome, and even if it wouldn’t be accurate to say Auburn got fortunate in all those games (a few of which, like LSU, they dominated and should have won by larger margins), yeah, c’mon, we got a few breaks here and there. If we play another one-score game today, there’s no guarantee we get them again.

But I’m feeling good anyway. We have the better team. We won the SEC West, the division that made the East its plaything over and over and over again. We have the best football player in the country. If we were going to be bothered by playing away from home, we would have lost that game last week by 21. (It’s our opponent that actually lost at Kentucky.)

More than anything else, as trite as it sounds to say … isn’t it just our year? It seems to be. That doesn’t really mean a thing; if Carolina wins today, I’ll be beyond disappointed, but I won’t be shocked. They’re a good team, and Auburn’s flirted with disaster before. But they’ve also rode out that flirtation again and again. Because it’s our year.

There’s a trophy on the line today, Tigers, one I’d like in our trophy case every bit as much as the Foy-ODK Sportsmanship. Go get it. War Eagle!

(Lastly, some housekeeping: there’s a running open thread in the comments here, and you can follow my in-game tweets at the CBS account and occasionally my own. Let’s do this.) 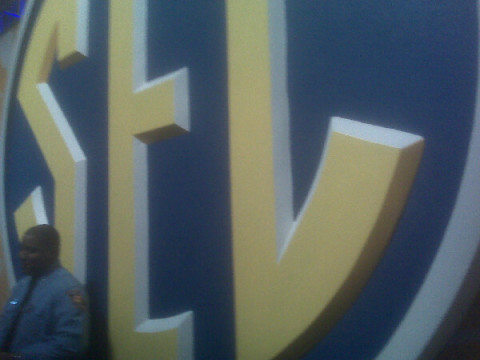 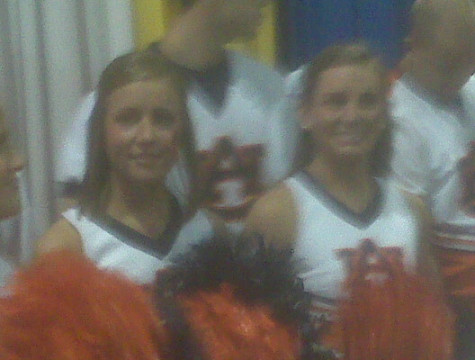 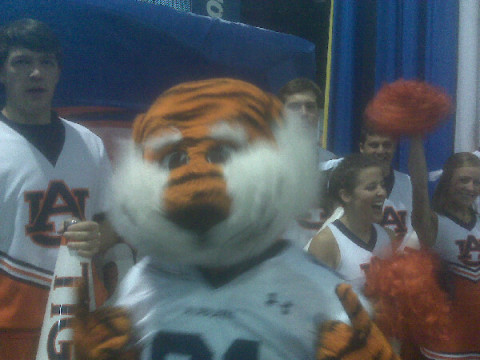 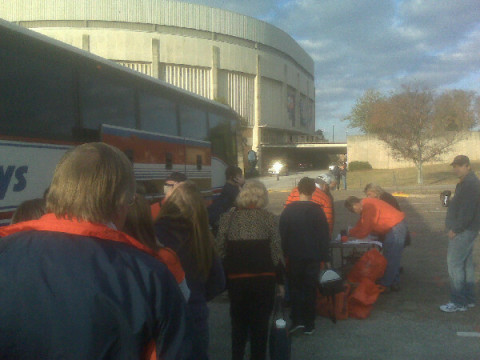 Go here for his Twitter feed and photos from the game today. I’ll try and post a few here too.

Oh, and Kenny Smith’s tweets are here. Jerry’s are here.

[8 a.m. CST]: Wow. Here we are. A few short months ago we wondered how this season would turn out. A lot of us, myself included, were optimistic about this season but did we see this happening? Playing for the SEC championship? Against South Carolina?!?! Hats off to both programs for taking this game away from the Gators and Tide. The spotlight is on two deserving programs today.

If Auburn wins today … things happen fast. A coronation of the team as the SEC’s best. A title game for the nation’s best will be set in place. A Heisman for Cam Newton possibly next week.

If Auburn loses? We wring our hands, muss our graying hair and wonder.

Remember flipping through Sports Illustrated‘s college football preview? Where were OUR TIGERS?!?! They were not in their preseason Top 25. The Washington Post (my paper up here) didn’t even sniff Auburn’s way in their rankings. Remember Alabama/Florida/Arkansas/LSU etc. getting all the press, all the love? Where are they now? WHERE?!?! Not here. Not playing for this.

Remember looking at the rankings of the QB squads in Phil Steele’s mag? The offensive rankings? No love. Cam Newton was on NO ONE’s radar. Except ours. He’s ours.

Hello chip on the shoulder. Yes, it comes with the territory when you love Auburn.

Good to great? Yep. We got to great with a quickness. But they proved their “greatness” in many, many ways. I think Van and John do a great job pointing out how we got to this “perfect point.”

I’ve never played football. I’ve never been inside any football locker room. What must it be like to have this coaching staff as your mentors? To challenge you. Someone to lean on when times are tough. Wow. This moment was BEFORE things got out of hand about our Cammy Cam in the press:

Maybe they knew tough times were coming. But Auburn’s coaching staff definitely knows how to pull a team together, don’t they?

Family. Spirit. Teamwork. Brotherhood. This Auburn football team (and its supporters) have got all these things in spades. That’s the secret to this team, probably to any “good to great” football team. Does a “good” team just have the athletes and not these extras? *cough* Bama. *cough* I dunno. But it’s a good guess that this coaching staff has cultivated a winning spirit at Auburn. You could see it early in the season. Our team is having a better time out on the football team than yours. Our guys are loving this game and they are loving Auburn.