The Silent Season of a Hero: The Sports Writing of Gay Talese
Gay Talese
308 pages
Paperback 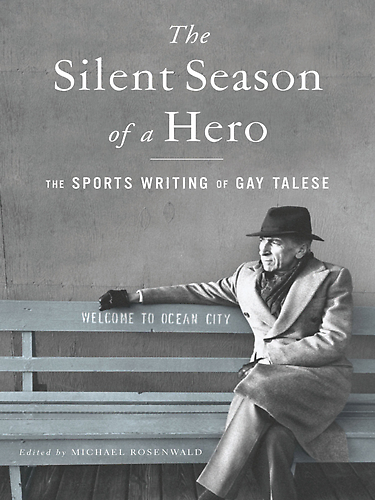 There were so many fine fiction writers, it seemed to me, and not enough nonfiction writers who had mastered the art of storytelling, and so it was my goal to become one of these.

There are two basic ways to write as a journalist. In one approach, the journalist strives for objectivity, attempts to remove all sense of self and bias and hopes to act as a sort of colorless filter. Saying, in effect, I’m not here. Most newspapers and news outlets take this approach with the typical article, especially hard news or basic sports reporting.

In the other approach, the approach I prefer, as this aside makes clear, the journalist admits his or her role in shaping what is written. Instead of trying to blur into the background of the story, the writer acknowledges what every reader knows on some level—these people aren’t talking to air; there is someone there asking the questions and shaping the story.

Though he wasn’t elected sports editor of the Crimson-White until his junior year, as a journalism major he immediately resisted teachers’ efforts to drill into his writing the who-what-when-where-why formula of daily journalism by incorporating into his stories the tools of a fiction writer—scene, characters, dialogue, narrative.

The difference between the two, basically: Do you want to decipher the writer’s opinion or do you want it stated? Because it’s there either way. The best journalists can get close to the gold standard of fair-and-balanced coverage. But just because “I” isn’t explicitly stated doesn’t mean choices weren’t made—by the questions asked, the quotations used, the people interviewed, the lead—to give more credence to one side or to make one person or group look the villain. Objectivity is largely a lie. Opinion shapers are fallible too, maybe more so than the common reader, whoever that is.

Gay Talese is a proponent of the second approach. Tom Wolfe said his article printed in the 1962 edition of Esquire, “The King as a Middle-Aged Man,” about the post-boxing life of heavyweight champion and boxing legend Joe Louis, was a “groundbreaking example of what he called ‘The New Journalism.’” Wolfe, the fancy-footed face of New Journalism, Joan Didion, Truman Capote, Norman Mailer, Hunter S. Thompson, Talese and others of similar persuasion used the tools of fiction writing—scene setting, dialogue, time jumps, first-person narration, etc.*—the second approach on juice, during the ’60s and ’70s to tell “stories with real names.” Talese didn’t think there was anything “new” about it.

I was not entirely happy to be identified as a founder of the so-called New Journalism because I never thought that what I was doing particularly “new.” Its foundation in my case was old-fashioned reporting, lots of leg work, combined with much patience and polite persistence.

Most writers leave the categorizing and classifying to others. They’re too busy with the actual doing. William Gaddis said he never thought of himself as a post-modern writer. And I’m sure Thomas Pynchon would say the same. Though he would be wearing a sack over his head and answer “No comment.” through a voice-changer before throwing a smoke bomb and jumping out a second-story window. If he could even be found.

The Silent Season of a Hero is a collection of Talese’s sports writing assembled and edited from throughout his writing life by the Washington Post’s Michael Rosenwald. The book begins, after an introduction by Talese, in 1948 when he was a 15-year-old high school student reporting on local sports for the Ocean City Sentinel-Ledger, skips to his time at Alabama when he was sports editor of the Crimson-White**, then onward to his time at The New York Times as a reporter and features writer and finally to his magazine career at Esquire and elsewhere.

If read sequentially, the reader is able to see the progression of Talese as a writer, from budding sports reporter to master of New Journalism. The latter half, the half containing his magazine writings and longer pieces, is superior and worth the price of admittance. The best selections of this latter half are “Suspicious Man in the Champ’s Corner,” “The King as a Middle-Aged Man” and the title piece, “The Silent Season of a Hero,” which is about the post-retirement life of Joe DiMaggio.

Talese began taking bigger risks with his stories. He wasn’t always successful at convincing his editors, and he came to call himself a .200 hitter—like a baseball hitter who got a hit 2 out of 10 times at bat. But when succeeded in his risk-taking, Talese’s stories were like nothing else published in the Times.

But the very best story in the whole collection, if you ask me, is “The Loser.” The piece, which was originally printed in Esquire in 1964, is about two-time heavyweight champion of the boxing world Floyd Patterson. Talese wrote 37 different stories about Patterson and considered his relationship with the fighter the best he had with a subject. Talese loved to write about losers. He felt that was where the real story was. Not with the winners and their jubilance. But with the repeated losers, those that kept getting knocked down and down and down. And yet, for some reason, a reason Talese hoped to examine and maybe even explain by way of narrative detail, they kept getting back up.

It was after being knocked out by Johansson in their first fight that Patterson, deep in depression, hiding in humiliation for months in a remote Connecticut lodge, decided he could not face the public again if he lost. So he bought false whiskers and a mustache and planned to wear them out of his dressing room, to linger momentarily within the crowd and perhaps complain out loud about the fight. Then he would slip undiscovered through the night and into a waiting automobile.

Sports writing is at its best when it looks at these losers—the Doug Barfields, the Eric Ramsesys, the 2010-2011 Auburn Tiger basketball teams***—and deciphers some meaning. You lost, now what? How did you respond? And what does that responding say about you as a person?

Gay Talese asks and answers those questions as good as any sports journalist I’ve ever read.

* I’ve always had the suspicion writers use “etc.” when they know there is more to add but they’re not exactly sure what that more is. Here being a prime example.

** Talese was a poor student in his Ocean City high school and was rejected by every college in the region. A customer of his father, who was a tailor, was an Alabama grad and made a couple calls. “Talese was accepted there a few weeks later, not even knowing he had applied.” So don’t blame Gay. He didn’t know.

Ben Bartley is a student at graduate of Auburn University. Most of his time is spent doing as little as possible, eating, and controlling manageable vices. He will one day graduate recently graduated with a degree in journalism and maybe find might find a job. Fingers crossed. In the meantime, he’s TWER’s assistant editor / water boy. Write to him at [email protected]. (Did you read his story ‘The Mysterious Auburn Man”? It was reprinted in the winter issue of Auburn Magazine).

* O Brotherman, who are you?
* In the time of “Got 13″ she was a Tiger
* Gus Malzahn on the Wu-Tang Clan
* Alice Fraasa demonstrates the AU Gang Sign
* Auburn’s Miss Universe contestant, Audrey Moore
* Auburn amputee has tiger-striped prosthetic legs