Auburn made its 12th win of the season the most memorable, mounting a rally from 24 points down in the second quarter. Auburn quarterback Cam Newton single-handedly outscored the Tide, accounting for all four of Auburn’s scores despite being sacked four times and being limited to 1.8 yards per carry and 39 total rushing yards.

Tennessee became bowl-eligible after slowing down a free-falling Kentucky team that is happy their next opponent is not in the SEC. Vols freshman QB Tyler Bray passed for 354 yards and two touchdowns and outdueled departing Wildcat QB Mike Hartline as Tennessee extended its winning streak over Kentucky to 26 games.

South Carolina humbled Clemson 29-7 as the Gamecocks continue their late-season push to the Sugar Bowl. Gamecocks QB Stephen Garcia got a little dinged up in this game but managed to find Alshon Jeffery five times for 141 yards in the win. Don’t count on any minor injuries affecting Garcia in the SEC championship game.

Georgia Tech outgained the Georgia Bulldogs 512-425, earning a remarkable 32 first downs, 26 of them rushing. While Georgia Tech amassed 411 yards rushing on 77 plays and controlled the ball most of the game, they allowed a whopping 8.9 yards per play against them. Georgia QB Aaron Murray completed 15 passes for 271 yards and 3 touchdowns in the 42-34 win in which UGA failed to cover the spread.

LSU managed to sack Razorback QB Ryan Mallett four times and intercept him twice, but they also allowed him to pass for 320 yards and 3 touchdowns in a game where LSU was outgained 464-294. The LSU defense, which had carried the program to the brink of a Sugar Bowl bid, finally caved and Les Miles’ luck ran out.

Florida lost 31-7 in one of the Gators’ worst showings of the year. Florida QBs John Brantley and Jordan Reed completed a combined 8 of 16 passes for 64 yards, not exactly the type of stuff for rivalry games. The Gators also turned the ball over four times in the loss, falling to 7-5 for the year. In the Gators’ defense, each of the five teams they lost to is ranked in the Top 25.

Ole Miss needed a 14-point fourth quarter rally to keep this game’s final score respectable. Ole Miss QB Jeremiah Masoli managed to add another mediocre game to his resume, going 24 for 44, 261 yards and a touchdown and interception. The 31 points allowed in the loss was actually the Rebel Black Bears’ third best defensive effort all year in conference, having given up 28 points to Vanderbilt and 23 to Alabama.

Vanderbilt achieved something rare last weekend against Wake Forest — outgain your opponent 443-299 and lose by 3 touchdowns. Vandy managed to extend its losing streak to seven games after learning just 12 hours before that head coach Robbie Caldwell was “stepping down.” After losing by 21 points at home to a team that had won only two games all year, the Commodores need a new direction.

Each of the charts below compares Auburn and South Carolina’s season-to-date statistics. The national ranking is also provided. For example, Auburn’s scoring offense is putting up 41.6 points per game, which is ranked seventh nationally.

On offense, things break down pretty easily: Auburn averages about 100 yards and 8 points more per game than South Carolina. Both teams are relatively balanced, however, with Auburn accounting for 60 percent of its offense on the ground, and South Carolina accounting for 61 percent of its offense through the air. Both teams rely on efficient passing from their quarterback, but the edge here goes to Auburn QB Cam Newton.

On this side of the ball, the edge goes to South Carolina, but it is close. South Carolina allows 5 fewer points per game, but the Gamecocks had the luxury of playing an offensively inept Georgia team and Vanderbilt. Auburn had to deal with a red-hot UGA team and LSU.

Both teams have excellent rush defenses. South Carolina had a top-tier rush defense when the teams first got together, but they allowed 300 yards of rushing. Holding Auburn to less than 200 yards would be a good target for the Gamecocks, whose rush defense looks better than it is because of their porous pass defense. The same certainly holds true for Auburn, and both teams will be looking for big plays in the passing game. If Auburn can hold South Carolina to 200 yards through the air, they will have an excellent chance of winning the game.

South Carolina’s defensive gets excellent penetration in the passing game, good for 3.3 sacks per game (No. 3 nationally) and 7.3 tackles for loss (No. 13 nationally). Auburn is no slouch in either of these categories, however, and could be in good shape for a big game against Garcia if he takes too much time in the pocket. 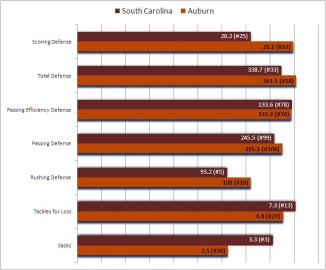 Special teams play is relatively even between Auburn and South Carolina. The Gamecocks force more turnovers but lose more as well. Interestingly in SEC games, Auburn is first in the SEC with a +5 margin; South Carolina is 10th with a -3 margin. South Carolina has performed better than Auburn in the punting game, but I suspect Auburn coaches will be happy with netting 35 yards per punt, provided Quindarius Carr doesn’t muff any balls in the return game. Auburn’s kickoff return game could play a big factor in swinging momentum Auburn’s way. 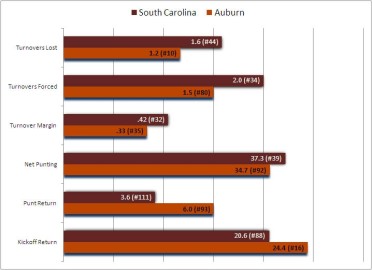 This is where things get a little scary. Auburn has prided itself all year on converting well on 3rd and 4th down … but so has South Carolina. South Carolina nearly matches Auburn’s conversion efficiency on offense but surpasses the Tigers on defense. The rates are relatively close with the exception of red-zone defense, where Auburn allows opponents to score 87 percent of the time (No. 90 nationally) and South Carolina allows 69 percent of red-zone possessions to convert (No. 7 nationally). 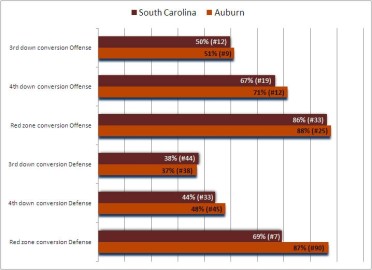 The Model likes Auburn to cover the 5-point spread, and there are plenty of reasons to suspect the Tigers could be dominant. Gus Malzahn is an offensive genius who should be well prepared to counter anything South Carolina can ready to slow down the offense, and Ted Roof has managed several inspirational, albeit too-late-for-comfort, defensive stands when the game is on the line. Garcia has played poorly on the road and Auburn has had good success making South Carolina a one-dimensional offense in the last matchup.

That said, because of its well documented passing defense struggles, Auburn remains a team that needs to make the most of its offensive possessions and from time to time will need to call on assistance from Lady Luck. If Auburn wants to advance to the national championship game, the team cannot rely solely on Cam Newton to assert his will on the Gamecocks. To win Saturday afternoon, Auburn will need to play its most complete defensive game of the year, and the Tigers will need to maintain that characteristic second-half focus and determination from the opening kickoff. Prediction: Auburn 37 – South Carolina 27. 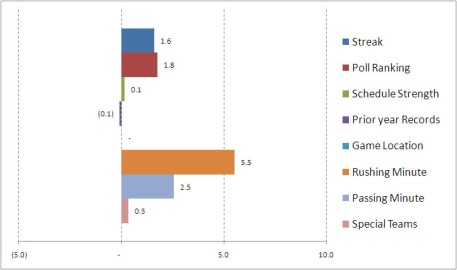