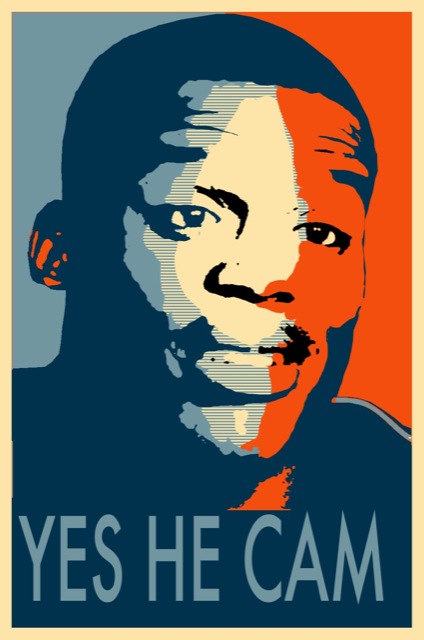 So Cam Newton is eligible at Auburn:

I am shocked, shocked I tell you, to discover the army of Internet lawyers and would-be lawyers that swore Newton would be declared ineligible based on his father’s transgressions actually knew less than the paid professionals in Auburn’s compliance department, who have been insisting for weeks via channels both underground and less so that Newton would end up in the clear.

Not even the ruling has slowed the Newton naysayers, of course, who have universally declared that if the NCAA didn’t find Newton ineligible, then the problem isn’t that Newton wasn’t ineligible to begin with, the problem is that the NCAA itself doesn’t realize he’s ineligible.

By this point, I’m just laughing. Newton’s going to take the field Saturday, he’s going to take the field in Auburn’s BCS game, and if nothing else comes of the investigation (more on this later) the entire brouhaha is going to be nothing more than an ugly footnote. (A giant footnote, sure, but compared to the kind of season Auburn’s having and could go on to have, a footnote nonetheless.) As we learned when Newton beat Georgia, and again against the Tide, it’s amazing how much the Saturday arrival of actual football manages to overshadow what during the week seems like the end of the world. (If you want to be thankful for anything in this circus, Auburn fans, be grateful the story broke now and not during the horse latitudes of midsummer.)

But before I get to my other thoughts on the ruling, I’d like to offer you some thoughts on the man himself. They’re just not here; I’ve long been a reader and admirer of the online sports journal Norman Einstein’s Sports and Rocket Science Monthly — they write geeky, literary essays about sports, so being a geeky, literary sports fan, I never really had a choice — so when they asked me to write a piece arguing Cam’s Heisman candidacy as part of their Heisman special issue, I made the half-mistake of accepting. I say half-mistake because I wound up staying up half the night when sleep is at the kind of premium it wasn’t even during Finals week, and because writing anything long-form for somewhere that wasn’t here felt like a betrayal.

But only half-, because I like how it turned out. A sampling:

Since Bo was more avatar of some particularly violent law of physics than actual football player, this has proven difficult. We’ve taken to telling folklorish tales about his exploits away from the field to try and get our point across. There’s the time he got challenged by the team quarterback in practice and threw a football the length of the field, maybe through the uprights. The home run he hit at our baseball stadium that smashed the windshield of a car three blocks away. The afternoon all the other players were dragging tires around the practice field for conditioning, and Bo threw his harness belt around the moon and pulled it to the other side of the sky, causing unexpected high tides and great shrimping down on the coast. That sort of thing.

So when Newton began throwing pinpoint 50-yard bombs inside the 10 (his frequently off-kilter, back-foot mechanics only emphasizing his unnatural physical gifts) and following up on the very next play by bulldozing some hapless linebacker 4 yards backwards into his own end zone, we knew what we were seeing. The first whispered comparisons to Bo started just four weeks into the season, after the South Carolina game, the one he opened with a weaving 54-yard touchdown run that ended with a preposterous full-stretch dive for the pylon from a full 7 (or 8?) yards out. (We’re going to remember it years from now the way hoops fans remember Dr. J dunking from the free throw line.) By midseason, the comparisons were no longer sacrilege. Once he had vanquished LSU, “Is Cam the new Bo?” had become a legitimate topic of conversation, with the lean firmly towards “Yes.” And after he led the comeback at Tuscaloosa in the Iron Bowl, a victory so cerebellum-meltingly improbable we know it could only happen with the aid of one of the football immortals, it was official: he had ascended to the highest pinnacle of Auburn’s Mount Olympus. There’s a small temple up there, orange and blue columns out front, and it’s just Bo and Cam, hangin’ out. Pat Sullivan gets to stop by occasionally.

OK, onto more reax to the Newton finding:

— I tried to remember the last time I was that happy about something Auburn-related but not actual football. I failed. Even hearing that hotshot recruit X had committed/signed can’t compare to opening up that dry-as-dust release and reading “is immediately eligible.”

It was joyous. It was also a little weird.

— I think this “loophole” business is frankly nonsense –yes, I’m sure parents are just lining up to ask schools for money they can’t have at the risk of making their children ineligible every place they ask–but if you want to argue that Cam ought to be ineligible, that Cecil’s actions are transgressive enough that in the name of deterrence they should have made Cam persona non grata no matter where he enrolled, hey, knock yourself out. Auburn and the NCAA will be saying the tomato that matters, so say tomahto all you want. If Mike Slive and the NCAA feel this is a soft spot in the rulebook that needs to be toughened up for the next Cecil Newton, hey, their prerogative.

Ah, but you, Random College Football Writer or Fan on the Internet, you clearly know more about the bylaws in question than any of these people who make their living by knowing about them, you have the expertise and knowledge to tell us that the decision didn’t go “by the book” even though the people who made the decision wrote the damn book.

Hey, Random College Football Writer or Fan on the Internet, I’ve got a cousin who’s starting a restaurant; they’ve hired a chef, lifetime spent in the kitchen, cut his teeth in New York and Paris. But could you tell us what kind of recipes he ought to be using? We could use your expert advice.

(I should clarify that I also don’t have a problem with the skepticism that Cam never knew about Cecil’s discussions about payola at State; even I, truth be told, find it a little bit of a stretch that a father with that much input into his son’s football career would manage to keep something as big as his solicitation of State boosters a secret from him. But proving it was always impossible, of course, and seeing as I seriously doubt this was Cam’s idea or that telling his Dad to knock it off was ever a real option, I don’t think this does any damage to Cam’s personal moral high ground. Sorry if you disagree.)

— On a similar note, I’ve been just flabbergasted by the number of otherwise intelligent people who can’t tell the difference between previous NCAA cases in which someone, be it family member or athlete, received some sort of benefit and a case in which we have no evidence the Newtons (pere or fils) ever got a thing. I’ll just let Year2 do the talking for me:

Noticing a trend? The difference here is that according to the story that the NCAA currently believes, Cecil Newton never got any money from anyone. As that’s the case, you can’t compare this to another case where someone actually received extra benefits of some kind.

— Here’s something hysterical: everyone outside of Auburn looked at the reports that the AU compliance department and the NCAA met the Thursday before the Georgia game, and assumed that meeting was where the NCAA warned Auburn they shouldn’t be playing Newton and Auburn responded by saying SCREW YOU GUYS, WE DO WHAT WE WANT.

Instead, the stunningly neat-n’-tidy resolution this week suggests that what happened was that the NCAA and Auburn came together to agree on the package of facts delivered to the SEC this week, and on which the Cam decision was based. The moment where we were told Auburn was thumbing its nose at the NCAA was, in fact, the moment where Auburn and the NCAA were working most closely together.

I believe the phrase is “LOL.”

— Speaking of that particular incident, it’s worth noting that it was the Atlanta TV report and good ol’ P-Marsh who reported the facts of that meeting — that Cecil admitted to asking for money but that Cam was in the dark, and that the NCAA came away giving Cam the OK to keep playing — while the national media was losing its head. It’s the Auburn-centric whispers that Cam would be OK all along that have been proven right while the work of the likes of Joe Schad has been proven irrelevant at best and outright unfactual at worst.

The lesson: where Auburn is concerned, we ought to get our scoop from the Auburn-based media. Not everything they did during this saga covered them in glory (the energy with which they played whack-a-mole with the sources in the Evans/Thamel reports could have been better used at times), but most of the truly important facts of this story have been found in places other than the national media. It’s the truth.

— OK, lastly, we’ll need to remember: this isn’t over yet. It’s not as not over as many would have us believe. But as long as the NCAA is still poking around Cecil Newton’s financial past, as long as the Mississippi Sec. of State is talking to Rogers and Bell, as long as the FBI is still out there lurking like some X-Files villain, there remains the distinct possibility there’s some new landmine yet to be uncovered that could blow everything to hell.

No, I don’t expect that to be the case; given his bumbling attempts to shake down the folks at State, I really don’t see Cecil as the kind of criminal mastermind who could (by all accounts) cooperate fully with the NCAA and Auburn, while a horde of reporters dig into his activities for weeks on end, and the specter of the FBI and their IRS buddies potentially threatening him with jail time, and still manage to keep a sum like $180,000 completely hid. I’d like to think that if there was anything to find, it would have been found by now.

But I don’t know it, not just yet. Until we get another delirium-inducing NCAA press release, we can’t breathe entirely easy. Easier, sure. But we’re not there yet.