A 10-0 undefeated Auburn hosts Georgia this weekend in a game that could make or break Auburn’s championship aspirations. Six years ago, No. 8-ranked Georgia traveled to Auburn set on ruining Auburn’s then undefeated season. Those Bulldogs were 4-point underdogs in 2004 and ended up losing 24-6. With Auburn on the brink of another undefeated season, let’s look back and compare Auburn’s statistics from the first 10 games of 2004 and 2010.

In 2004, Auburn’s offense was clicking on all cylinders, a very strong passing game led by QB Jason Campbell was complemented by a couple of pretty strong running backs by the name of “Go Crazy” Cadillac Williams and Ronnie Brown. That team was averaging 37 points per game, which was more than enough points to win with the defense Auburn had that year. Auburn’s 2010 offense has also put up staggering numbers, the type of numbers that attract enough attention for someone to hire away your offensive coordinator. Auburn is averaging 14 percent more yards in 2010 and 14 percent more points. 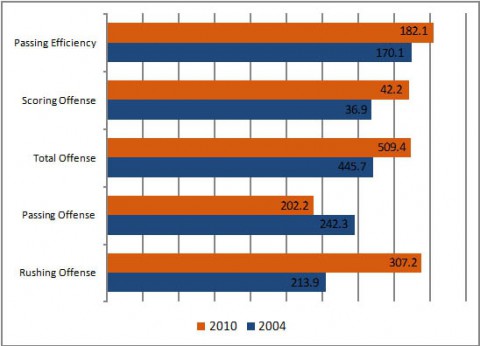 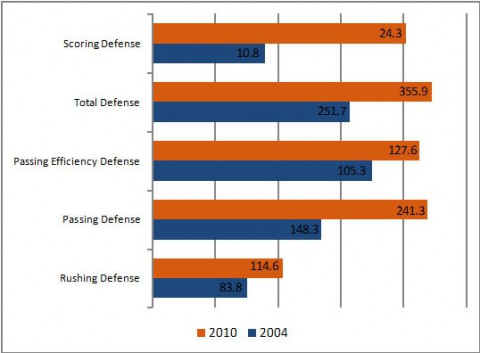 Season to date, the 2010 team has played a much tougher schedule than the 2004 team did, which accounts for some of the large differences in the defensive statistics. Auburn’s opponents in 2004 had won 51 percent of their games; this year Auburn’s opponents have won a staggering 68.5 percent of their games (both these statistics exclude games against Auburn). Auburn’s turnover margin is half this year of what it was in 2010, which should be expected against a higher level of competition. While Auburn’s kickoff return team has been very good and remarkably consistent throughout 2010, its punt return and punting game have struggled. In 2004, all aspects of Auburn’s special teams were playing at a high level that the 2010 squad has yet to achieve. 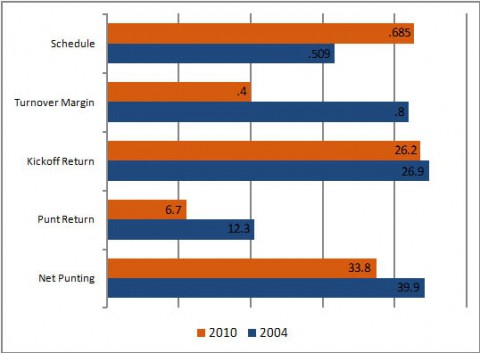 Comparisons between these two teams may be a little premature with three, hopefully four, more games left to be played. The 2004 team earned its undefeated season with defense. This year’s team is going to have to do it with offense. Here’s to a 14-0 season led by the greatest one-year starter the college game has ever known. For those of you out there concerned about all that talk of a perfect season, don’t worry. You can’t jinx Superman.