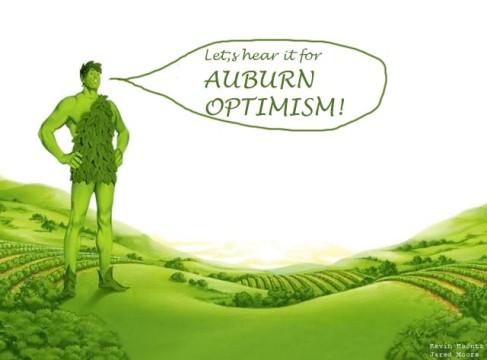 Based on how all teams played last week, I (acting on behalf of Vegas bookies) have adjusted the matchup lines you could expect if these teams played this week. A few things to mention first. In order to “improve” a team’s odds, one of three things needs to occur: 1) the team needed to improve on their per game statistics in the past week, or 2) their opponent’s per game statistics needs to get worse, 3) the team needs to move up in the polls.

In Auburn’s remaining games, we see the following changes:

(Click on the image for TWER’s patented “E.A.G.L.E-Vision” technology! Otherwise known as the magnifying tool.)

We can use these odds from the above color-coded Vegas Lines Matrix to impute the implied probability of winning in these matchups. These probabilities are calculated using thousands of prior games. For example, let’s consider the actual Alabama at LSU spread, where LSU is a 6.5-point home underdog. In the past 10 years (the period my data covers) there have been 98 games where the home team was an underdog by exactly 6.5 points. In these 98 games, the home team won 33 and lost 65, for an implied win probability of 33.7 percent. If the line moves “down” to +6 points, historically we observe: 77 games, 22 wins for a win percentage of 28.6 percent. If the line moves a half point in favor of the Crimson Tide to +7, we see: 149 games, 44 wins for a win percentage of 29.6 percent.

By populating the above matchup matrix with these probabilities, we can “simulate” the remainder of the season, and calculate such things as a team’s expected record or probability of going undefeated. Note that the probabilities actually displayed here are a 3-line moving average, so a 6.5-point road favorite would use all of the games mentioned above (lines at +6, +6.5, +7) to calculate a weighted average to smooth out inconsistencies from occasionally sparse data at certain line values.

As with the above matrix above, the values are color coded relative to the home team’s chances of winning. The greener the cell, the more likely the home team is to win.

After avoiding a letdown game last weekend over Ole Miss, Auburn moves to 9-0 with what is essentially a bye-week with Chattanooga coming to town. Fellow columnist Thor Burk had his Chattanooga worry level at “Casper” last week, which equates to a 99 percent chance of Auburn winning this weekend in the schedule Matrix below. Alabama moved up the polls during the Tide’s bye week, making this year’s Iron Bowl a likely matchup of Top 5 teams. Even the most optimistic of the Auburn faithful couldn’t have imagined such a scenario when the season began.

One reader brought up a scenario that I would like to share: 10-1 Alabama facing 11-0 Auburn. In this scenario, the winner would be heading to the SEC championship game and the loser would likely have to “settle” for the Sugar Bowl (provided the SEC West team wins the conference championship game). To answer this question, I ran a 10,000 iteration Monte Carlo simulation five times. In these simulations, Auburn encountered a one-loss Alabama team about 41.8 percent of the time. Auburn was undefeated heading into the Iron Bowl about 86.5 percent of the time. (Note that the model assumes Auburn will be a 16.5-point home favorite against Georgia, which may be optimistic). The odds that both of these events occur simultaneously is about 36 percent.

I ran through the various scenarios that could play out with Alabama, Auburn and LSU all still having a chance to win the SEC West and found the following:

• Auburn wins 75 percent of the time.

• Alabama wins 21 percent of the time.

Following a win in the Tiger Bowl, Auburn is the clear front-runner in the SEC West. Alabama has two tricky games remaining this season: at LSU and the Iron Bowl. They will likely need to win both of these to make the trip to Atlanta, but don’t dismiss this as a very real possibility (28.7 percent). Mississippi State enjoys a bye week this week before gearing up for a tough remaining schedule: at Alabama, home against Arkansas, then the Egg Bowl. Don’t be surprised if this 7-2 Bulldog team has slipped to 7-5 by the time bowl season rolls around (17.4 percent chance of not winning any more games).

In the SEC East (which is now 2-13 against the SEC West), South Carolina managed to pull away from Tennessee in the 4th quarter, while Florida upset Georgia in Jacksonville to remain in the hunt. Florida should win this weekend against Vanderbilt, and South Carolina is a field goal favorite at home over Arkansas. Georgia (4-5) gets Idaho State this week, and needs to win at Auburn or at home against rival Georgia Tech to become bowl eligible. As predicted more than a month ago, the loser of Vanderbilt and Tennessee will lock up a last place finish on Nov. 20 in the Cellar Bowl.

Mac Mirabile is a 2002 graduate of Auburn’s economics and journalism departments. During his time at Auburn, he was a copy and photo editor with The Auburn Plainsman. He has a master’s in economics from UNC-Chapel Hill and has written numerous academic publications on college football, the NFL and gambling markets. His previous column can be found here. He can be reached at [email protected]