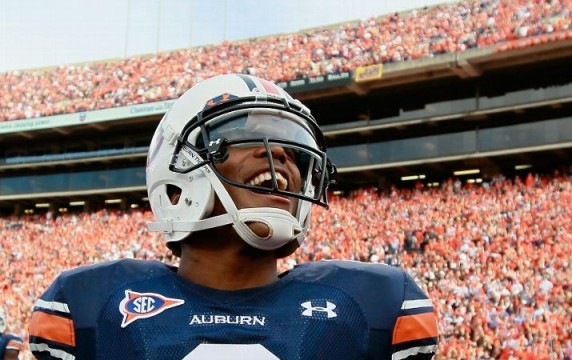 Last Saturday was an awesome day.

Even though Auburn — the university, the city, the fans, and the football team — sat embroiled in a controversy quickly becoming the biggest story in the history of college football, you wouldn’t have known it last Saturday.

As the sun rose early that Saturday morning, everything changed. Everything that used to matter didn’t seem important any more, and all the things that were previously forgotten were suddenly brought to the forefront of attention.

Everyone forgot all about the controversy that is consuming the sports world, and suddenly only one thing was on their minds: Georgia.

The big question that the CBS crew, the Georgia fans, and the rest of the world had going in was answered from the outset as far as a unanimous consensus of Auburn fans was concerned. Cameron Newton was going to play, or there was going to be a riot. Suddenly it didn’t matter what may have happened in the past, or what consequences may be brought in the future. We wanted to see our man play.

And so he did, and so did the rest of the Auburn Tigers, in a 49-31 rout of their oldest rival.

It began as a hostile brawl, spurred by typical midweek Bulldog trashtalk that provided plenty of motivation for Auburn, turning stiff-arms into right hooks, celebrations into taunts, and a “soft defense” into a defense that “hits too hard”.

But by the end of the game it was a celebration. The troubles that have plagued Auburn folks for the past couple weeks were well behind those of us in Jordan-Hare, as the stadium celebrated the eleventh win of the season, the careers of an outstanding senior class, and the day’s hard fought victory.

The stadium was as loud as I have ever heard it, the weather was as beautiful as ever, and the student section’s all-orange shakers gave a festive air, as if they were thousands of orange balloons set off at every moment, celebrating the careers of Josh Bynes, Wes Byrum, Zac Etheridge, and the rest of the senior class as they fittingly downed the only team in the SEC that they had never beaten in the last home game of their careers.

At the beginning of this 2010 football season, which seems like oh so many years ago, Jerry offered us his favorite explanation as to why we sports fans are sports fans, and what exactly sports is. He relayed to us a message from Nick Hornby, author of what I can only imagine is the soccer fan’s Bible, Fever Pitch, in which Hornby once offhandedly describes soccer and sports as, simply, “a different version of the world.”

If sports is a different world, then gameday is its sanctuary.

It’s a refuge and harbor away from our everyday lives. Not just for Cam Newton, who bounced around on Pat Dye Field completely absent-minded of what the rest of the world might think of him, or for the rest of the team, whose unbridled smiles hid away whatever trials and tribulations they may be going through, but in a way it’s a sanctuary for all of us as well.

But as the team climbed into the stands to thank the home fans once again, and as the band struck its first renditions of what is sure to be a playlist staple for years to come, “Lean On Me”, and as players waved goodbye as they disappeared into the darkness of the tunnel for the final time, we all knew that this victorious feeling wouldn’t last forever. And as we proudly marched down the ramp at Jordan-Hare Stadium, the outside world began to creep back in on us.

And as we filed out of the main gate and stepped outside and onto Donahue, everything returned back to normal. The world was back to the way it currently is, which, for the Auburn football fan, is upside down.

This weekend, we sat and watched and waited and listened.

But in that game, and during that moment, everything was alright.

I don’t know what’s going to happen next with this investigation. I’m not going to pretend that I know any more than you do.

But I do know that this season is far from over — in fact, it’s really just getting started. And as we turn our attention to Friday and the Iron Bowl, I do know this: No matter what happens, Auburn will keep playing football.

And, no matter what happens, nothing beats an Auburn football gameday.