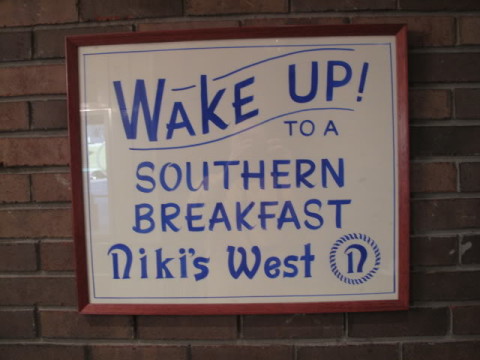 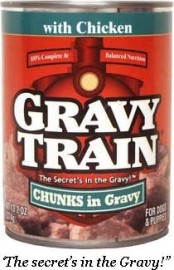 Note: “The Gravy Train” (this post’s unofficial nickname that I came up with just now. Like the photo to the side? I hope no one is hungover this morning. That photo and thinking about the “fragrant” contents inside could surely push you over the edge) will hereby cease linking to the ESPeeoN. I tire of them and their “Low” blows. All aboard the Gravy Train! With biscuit wheels and bacon tracks. Wooo-woooooooooo!

Let’s cruise around the Internet and see what we can see (updating through the morning).

Next stop! Early shot! Bama fans and their embarrassed dogs will be watching from home this championship season. (9:40 a.m. CST): I’ll probably be using this photo over and over again. I love it so. Easy pickin’s. Fish in a barrel. 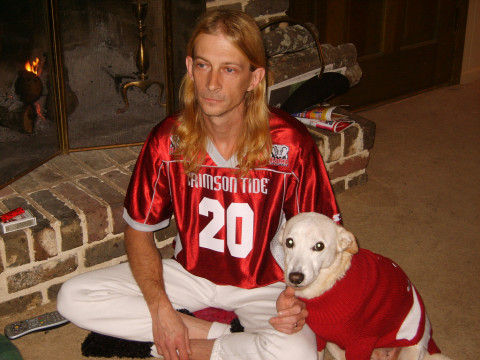 There’s a story here. I want to know it. Is this Christmas morning? Have they just wrangled that sweater on that poor pooch? There’s a quiet moment of Bama reflection here. The emptiness inside forever caught on film. The Wal-Mart jersey. Dogs thoughts? “Take it off. For the love of all things holy. Take. This. Crap. Off. Me.”

Next stop! Quite a “splash” on the AUfficial site this morning. (9 a.m. CST): Wow. You can’t even see Chizik under that gatorfall. SEC championship ticket info, shirts and whatnot there too.

… the biggest obstacle the Tigers face in the next 13 days is the culture that is the SEC — specifically, the state of Alabama. The subject of Newton’s status and who might have broken rules will be pursued the way a dog gnaws on an old soup bone — relentlessly. Despite the fact that we are now a week and a half into this story and there has yet to be any official allegation that Newton or Auburn broke any rules, there will be no relief from the toxic atmosphere that exists in this part of the world at this time of year.

The next 13 days are going to be very intense for No. 2 Auburn.

“Toxic atmosphere”? Ding! Ding! Ding! You are a winner! Just like pulling off your space helmet and taking a deep breath on Venus. Have your Tums/Pepto/Maalox/etc. at the ready, folks.

Jerry looks at the Pac-10 games and finds that “Oregon can win ugly, too.”

From Florence’s Times Daily this morning:

Maybe this helps explain something said the other day by a friend, who loves his Tigers: If Auburn wins a national championship, the NCAA can take away the wins but it can’t take away the feeling.

I want the wins and the feeling, thank you very much. 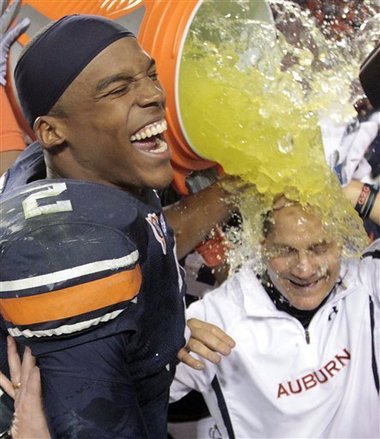 Photo via AP.
This does my heart good. With all that both these guys have been through the past few (it feels like 459) days, they certainly deserve this. I had a horrible feeling creeping up my spine all yesterday morning, before the game and even after the win. I guess it was the way the game ended. We, as fans of the Tigers, have went through the wringer too. I feel better about things this morning. !!!!SEC West Champs!!!! has finally registered. War Eagle!

Gravy Train’s first stop! Fairley certain Georgia’s hurtin’ (7:30 a.m. CST): Hey did you hear? Nick Fairley is now official a “dirty player.” Auburn takes cheap shots. I wouldn’t want him any other way. Beloved by us and his Auburn teammates. Hated, despised and feared by all others. But I have to say that the melee near the end turned my stomach. And now Auburn will be paying for it dearly in the first half of the Iron Bowl.

But pinning the blame for the game getting ugly entirely on Fairley’s play is unfair. The game was physical yesterday. These two teams were not on the field as a gathering of French dukes drinking tea, eating crumpets with polite talk of art and politics. You could make the case that the officials turned a blind eye to a lot of players’ actions for most of the game. Georgia’s Caleb King (talking to macon.com) certainly thought so:

Tailback Caleb King said the back-and-forth was going on all game.

“People were smack-talking. Pushing and shoving,” King said. “If you pretty much watch the tape, it’d probably be 30 personal fouls you could’ve called on both teams. It was towards the end of the game, so I guess it let loose a little more.”

So spare me the righteous anger that some in the Georgia camp have already displayed about it being all on Fairley and Chizik’s heads (for planting Murray’s head in the soil heh heh heh).

So now we have “dirty players” on both sides of the ball. Cheaters, chop blockers and head hunters all of them! For shame. Tsk. Tsk. Tsk. Now if you’ll excuse me, that SEC West crown looks in need of a good polish job. Good lord! Look at the dirt and grime! And it smells like the elephant house at the zoo!