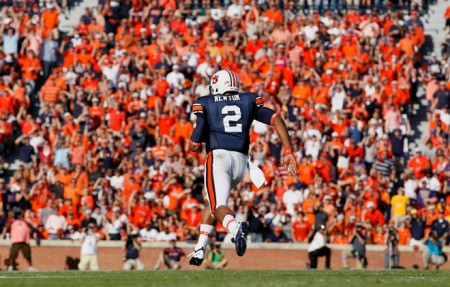 Here is the evidence we have connecting these two dots: the church where Cecil Newton preaches got its building up to code this spring. (Not “embarked on grand size-doubling expansion.” Went from “so ramshackle it couldn’t meet city building codes” to “met building codes.”) And Dan Mullen muttered some nebulous things about Newton’s recruitment on a radio show.

That is all. That is all the evidence to justify making the journey to Point B, of connecting these two dots.

— Auburn’s compliance department was made aware of the situation in late July, launched their own investigation, and were so confident in their finding that the Newtons were clean that Cam never missed so much as a minute of practice. To believe that Newton is on the take, you must also believe that Auburn’s compliance team is either grossly negligent, corrupt, or utterly beholden to the whims of the football program. Again: the overwhelmingly likely course of action if Auburn even had any doubt regarding Newton’s eligibility would have seen him off the field. But he will play this Saturday.

— The complete and total unanimity of Auburn reporters, writers, insiders, sources, etc. that both Newton and Auburn are clean and will remain so. It is one thing for Auburn fans to leap to an angry knee-jerk defense of their player and program. It is another for everyone halfway connected to the program to do so.

— The declaration from Cecil Newton that his church had the money for the immediate repairs (as far as we know, the only improvements made to the church) before Newton had ever committed or before Auburn had even begun recruiting him.

— The continued recruitment of Newton by Mississippi State even after being made aware of Kenny Rogers’ request for money. Dan Mullen and State were in a far better position for far longer to know about any violations committed in Newton’s recruitment. They pursued him to the bitter end anyway.

— Cecil Newton submitted financial records to the NCAA a month ago. The NCAA has known about the allegations for far longer than that. But the organization has not stepped in to prevent Newton from playing, either before or after receiving the information from Newton the elder.

— Gene Chizik’s fiery insistence last night that Newton was eligible. Unlike what some people would have you believe, yes, that bloody well means something. If Newton is on the take, he is already ineligible whether we know it or not. (Reggie Bush was never eligible at USC as soon as he pocketed agent money. USC merely thought otherwise.) Chizik is stating unequivocally that he is not, in the only language the NCAA permits him to use. If Newton is later found out to be ineligible, then Chizik is either a liar or woefully misguided.

— As I’ve written this, an AP report that states that Rogers and Auburn were never in contact and that Newton’s eligibility “has at no point been in jeopardy.”

So: Point A. Point B. To get from one to the other, you are putting your faith entirely in a handful of church repairs and, as the SEC spokesperson himself said, “rumors and innuendo.” Standing in your way are all the points made above. Is that really enough to get all … the way … there? Is there really enough substance here to connect these dots? When you weigh up the evidence for and against, does it really stack up in favor of the Newtons finding someone at Auburn who’ll pay them $200,000 and the school totally missing it over some loser at Mississippi State trying to make a quick buck off his old school ties?

I am an Auburn fan. I wear a pair of burnt orange-and-navy blue glasses it’s impossible for me to take off. So I am not the first person to ask. But for the rational life of me, until/unless new details are revealed, I don’t see how.

— At this point, to be perfectly honest, I don’t think the biggest danger to Newton is from the Rogers-centric aspect of the investigation; it’s from what else the NCAA might turn up now that they’re on the scene. Remember, the NCAA didn’t start talking to A.J. Green because they’d heard he sold his jersey; they were looking into the Miami beach party. But that didn’t make much difference once they’d found out about his little memorabilia sale anyway.

I’d like to think Newton is completely, totally clean, and that there’s no skeletons — Rogers-related or otherwise — for the NCAA to find now that they’re digging around in his closet. But that I’m not entirely confident about.

— Pete Thamel can get bent for including the Mullen dissembling in his story — a move I’m convinced he made only to give his version something that wasn’t in the ESPN story, which scooped his by a couple of hours, Twitter feed be damned — but I can’t work up any real outrage at the trio of reporters at the WWL. Do I wish they’d waited until they’d been able to get Rogers on the record? Yeah. But if he won’t talk, he won’t talk, and they were in danger of getting scooped. Do I wish they’d made more of an effort to revel Rogers’ background rather than just telling us he was under investigation from the NFLPA? Yeah. Do I wish they made more of an effort to spell out, as David Morrison did, that neither Auburn nor their coaches are part of the scope of the investigation? Oh yeah.

But Newton is the Heisman front-runner, the star quarterback for a team ranked second in the BCS with only four weeks remaining in the season, and the single biggest figure in college football this season; the media spotlight comes as part of that job, and there’s no reason to think anything in the ESPN report wasn’t factual, or even germane. (Yes, the discussion of the church falls under “innuendo,” but if Cecil is sending reports of his church’s finances to the NCAA, it’s hard for me to argue the church’s finances aren’t also part of the story.) A better job could have been done, but this is not a “non-story,” and its writers have been careful to say afterwards that they are not accusing (and have not accused) Newton or Auburn of anything untowards. The bottom line: Auburn fans’ anger needs to be focused on the people who have chosen to connect the dots, not those whose job it was to establish them.

(I say that as an ex-journalist, but TWER’s other resident journo disagrees somewhat stridently. So grain of salt.)

— About the Meyer thing: I dunno, man. It’s so weird. It portrays Meyer as such an unbelievably petty, bitter human being. My gut reaction to it is that this is the aforementioned Auburn anger giving rise to a convenient scapegoat. But again: the Auburn people who would know are insisting this is the case. So I’ll say this: I’m happier about the prospect that Auburn could face Florida in Atlanta than I was yesterday.

— Assuming that Newton continues to play, it’s not going to cost him the Heisman. Of course there’s some dingbats like Bianchi looking for some quick attention by playing the KILL HIM card, but there’s 900 Heisman voters out there, and if Newton stays eligible and healthy, the majority of those guys (and gals) aren’t going to deny him what he deserves over unfounded allegations.

— That’s about it. It’s Auburn’s word against, well, someone else’s word, as soon as that someone else actually accuses Newton of something.