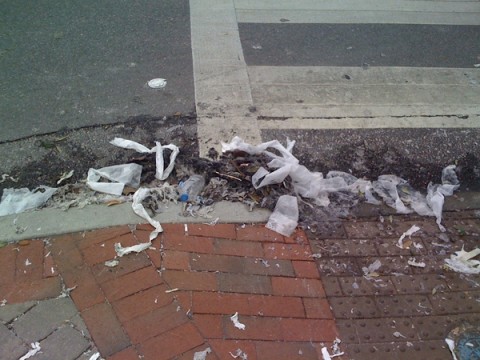 Turns out it was not a fire, but fires.

“What we found, at least, was actually three separate incidents,” Lamar said. “The first one was around 2 a.m. [Firefighters] were dispatched right way at 2 a.m. and were on the scene for around 15 minutes. They found a small area right around the tree and that was extinguished. And then were en route to another call at 2:45 a.m. at another spot down the street that was on fire. It was a fairly small area around 6 x 6 feet. They put that out. And then they were called back at 4:20 that morning to another spot a little ways away from the tree that was bout 3 x 3 feet.”

Lamar said reports of an arrest related to the fires are incorrect.

“As far as we know, no, there was no one arrested, but there were some witnesses.”

The incident is currently not being considered a case of arson.

“Without having more evidence that pointed to someone doing this intentionally, we typically wouldn’t treat it that way,” Lamar said. “We would usually say this is undetermined or accidental until someone steps forward with some kind of evidence that points to something else.”