With the exception of Boise State (who had the luxury of playing Idaho last weekend), each of the unbeatens struggled in some aspect of last weekend’s games. Oregon needed to rely on its defense and a Thanksgiving-sized helping of luck to get past Cal 15-13. Auburn was forced to overcome a 21-7 first quarter deficit, and managed to pull away late to win 49-31. TCU had to fend off a late charge by San Diego State and gave up a season high 35 points. This week, the only undefeated team playing is Boise State who faces a 6-3 Fresno State team, whose signature victory is actually a 35-34 loss last weekend against Nevada.

The graphs below shows, in order of the initial BCS rankings, each team’s likelihood of finishing undefeated. Let’s dig into each undefeated team in a little more detail and examine what’s changed from week to week. 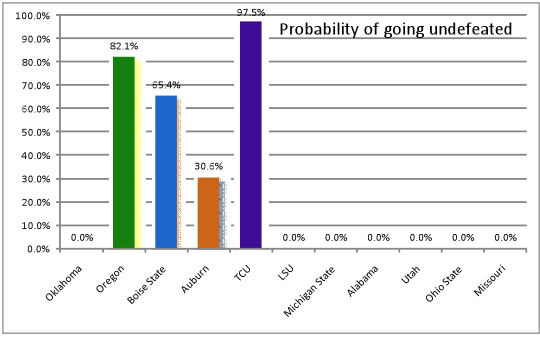 #1 Oregon (.9753, up from .9638) pulled away from the pack slightly, despite an ugly win at Cal 15-13. The Ducks were fortunate to get out of Berkley unbeaten, after a season low 317 yards of offense. The Ducks’ odds of going undefeated rose from 74.4% last week to 82.2% this week. Oregon has two games left, but no real challenges remaining this year.
The Ducks’ next two games are against Arizona (7-3) and Washington State (2-9). Oregon should be favored by three touchdowns in each of its last two games, which are looking more and more winnable each week. The Arizona Wildcats lost by 25 points on the road to #13 Stanford two weeks ago, and lost 24-21 at home to Southern Cal last week. Oregon State was blown out last week by Washington St. 31-14, the same Cougar team whose only prior win was a 23-22 victory over Montana State. Oregon State won’t put up much of a fight and will finish the season 4-8.

#2 Auburn (.9687, up from .9611) gained votes in both polls and maintained its #1 computer rankings after beating Georgia 49-31. Auburn’s chances of winning out rose from 23.3% to 30.6% after last weekend’s win. Unlike its unbeaten peers, Auburn has a conference championship game that is being factored into the Tigers’ chances of winning out. Auburn gets a week off to prepare for the Iron Bowl, where they should be small underdogs. Auburn’s resume continues to speak for itself.

#3 TCU (.8966, down from .9259) made a big statement two weekends ago, humiliating an undefeated Utah team 47-7. That accomplishment was lessened this weekend as Utah lost 28-3 to a bad Notre Dame team. Prior to last weekend, TCU hadn’t given up more than 24 points in a game this year, and has held 7 of its 10 opponents to a touchdown or less. That all changed last Saturday when TCU gave up 35 points and needed to overcome a two-touchdown deficit and hold off a late Aztec rally for the win. Many voters responded to the underwhelming victory by sliding TCU down a spot or two in the polls, costing them valuable positioning. Although TCU should finish the season undefeated (97.5% chance) with a sole trip to New Mexico (1-9) remaining, last week’s performance may ultimately cost them a chance at a BCS bowl game. If Boise State can take care of business, the Broncos should pass TCU in the BCS rankings, which means TCU could fall out of the BCS bowl games altogether.

#4 Boise State (.8634, down from .8662) will go undefeated. The Broncos moved to 9-0 after a 52-14 dismantling of the Idaho Vandals. Idaho had lost its two previous games by comparable margins, losing 45-10 at Hawaii, and 63-17 at home against Nevada. Boise’s only remaining test will come on 11/26 when they travel to face what should be a 1-loss Nevada squad. Boise State will go undefeated again this year, and will again be on the outside looking in unless two of the remaining three undefeated teams lose. Les Miles’ LSU Tigers on currently nipping at the heels of the Broncos, and with a rivalry game looming at Arkansas in two weeks, it’s plausible that an 11-1 LSU team could pass undefeated Boise in the BCS rankings, and depending on Auburn’s success in its next two games, LSU could end up playing in the National Championship game. 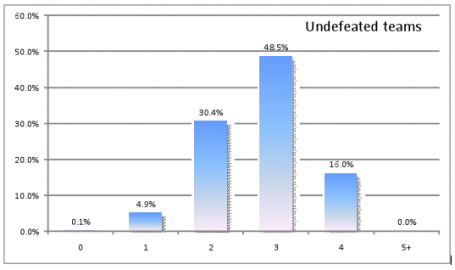 The odds of their being only two undefeated teams, most likely the easiest scenario for the BCS to handle has decreased from 35.1% last week to 30.4% this week. The most likely scenario is that three undefeated teams will remain (48.5%). The team with the most difficult remaining schedule is also the one least likely to make it through unscathed – your Auburn Tigers.

If Auburn falls to Alabama but wins the SEC championship, the Tigers would likely be positioned at #4 in the national polls, ahead of a one-loss LSU team. In that scenario, Auburn would still have a better than even chance of getting back into the national championship game. With TCU’s victory over Utah looking significantly less impressive after Notre Dame managed to do the same thing, the non-AQ teams’ collective resume took a big hit. While an Auburn loss to Alabama and a win over South Carolina would leave the Tigers in a good position to maintain the BCS #2 ranking, beating Alabama but losing to South Carolina would be disastrous. Many voters would have serious qualms about putting a team that didn’t manage to win its conference championship (even if that conference is the SEC) in the national title game.

Next week, I’ll rerun the simulation and update these charts and examine any new relevant situations to Auburn. Feel free to shoot me an email or post a comment if there’s anything in particular the readers of TWER would like me to look into.