TCU showed for the second year in a row that the Horned Frogs own the Mountain West conference after they travelled to Salt Lake City and beat the Utes 47-7, as a merge 4.5-point favorite. Covering the line by 40+ points is an exceedingly rare achievement; one that proves TCU is for real and deserves a shot at the national championship game. Unfortunately for TCU, Oregon, Boise State and Auburn all looked impressive in their wins and none showed any signs of slowing down. 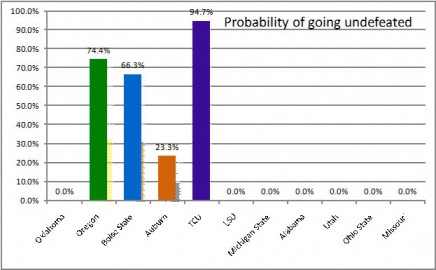 No. 1 Oregon (0.9638, down from 0.9777) gave up some ground to Auburn and TCU this week as the Ducks’ computer rankings fell from No. 2 to No. 3 after giving Washington a 53-16 pounding at home. The Ducks’ odds of going undefeated rose from 71.1% last week to 74.4 percent this week. Oregon’s sole remaining challenge for this year is against No. 18 Arizona on Nov. 26. The Wildcats lost by 25 points on the road to No. 13 Stanford last week. Stanford is now ranked No. 6 in the BCS and remains Oregon’s only quality win.

No. 2 Auburn (0.9611, up from 0.9599) gained votes in both polls and maintained its No. 1 computer rankings despite playing a FCS Chattanooga last weekend. A big win over Georgia may be able enough to steal a few more votes from the other BCS unbeatens in the polls, which would vault the Tigers to the BCS No. 1 position next week. Auburn’s chances of winning out rose from 21.3 percent to just 23.3 percent after last weekend’s win. The increase is relatively small because even though Alabama now seems more beatable according to the model, a 9-3 Florida has been now penciled in instead of South Carolina if the Tigers reach the SEC championship game, which The Model suggests is a tough matchup for Auburn.

No. 3 TCU (0.9259, up from 0.8911) made as big a statement as they could with a 47-7 win against an undefeated Utah team last week. TCU hasn’t given up more than 24 points in a game this year and has held 7 of its 10 opponents to a touchdown or less. With the win, TCU’s odds of going undefeated rose from 58 percent to 95 percent. TCU leads the nation in scoring defense (8.5 per game) and should have no difficulties handling its two remaining opponents, San Diego State (7-2) and New Mexico (1-8). TCU will need either Oregon or Auburn to lose before having a shot at the national championship game. There are rumors that a one-loss LSU team that wins the SEC championship game could also jump past the Horned Frogs.

No. 4 Boise State (0.8662, down from 0.8824) will go undefeated. The Broncos moved to 8-0 after a thorough dismantling of the Hawaii offense and defense. Boise State outgained Hawaii 737-196 and beat the Warriors at their own game, passing for 507 yards and allowing just 151 yards through the air. Boise State’s chances of going undefeated rose from 60 percent to 66 percent. Boise’s only remaining test will come on Nov. 26 when they travel to face what should be a one-loss Nevada squad. Boise State will go undefeated again this year and will again be on the outside looking in unless two of the remaining three undefeated teams lose. 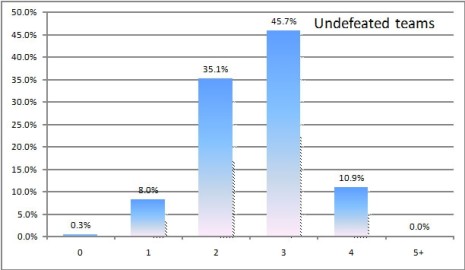 The odds of their being only two undefeated teams, most likely the easiest scenario for the BCS to handle, has decreased from 39.2 percent last week to 35.1 percent this week. The most likely scenario is that three undefeated teams will remain. The team with the most difficult remaining schedule is also the one least likely to make it through unscathed — your Auburn Tigers.

If Auburn falls to Alabama but wins the SEC championship, the Tigers would likely be positioned at No. 4 in the national polls, ahead of a one-loss LSU team. In that scenario Auburn would still have an outside shot at getting back into the national title game (we should displace Boise State, and maybe TCU). Tons of voters want a non-BCS team to get a shot in the national championship this year, but when push comes to shove, I suspect many would have a hard time putting a TCU or Boise State above a one-loss SEC champion. The SEC is 6-0 in BCS title games, having won the last four. Statistics like that speak for themselves.

Next week, I will rerun the simulation and update these charts and examine any new relevant situations to Auburn. Feel free to shoot me an e-mail or post a comment if there is anything in particular the readers of TWER would like me to look into.