Last week, Michigan State and Missouri both lost as The Model predicted. Meanwhile, Auburn and Oklahoma and Utah all won on the road despite each being no more than a touchdown favorite. The ranks of the unbeaten have dwindled to Auburn, Boise State, Oregon, TCU and Utah. Next week we’ll have one fewer undefeated team as TCU travels to Utah.

For a review of the methodologies used to estimate the values below, please see a previous week’s thorough discussion of Monte Carlo simulations. Again this week, I’ll bypass the technical stuff and focus on what’s most interesting: the scenarios. 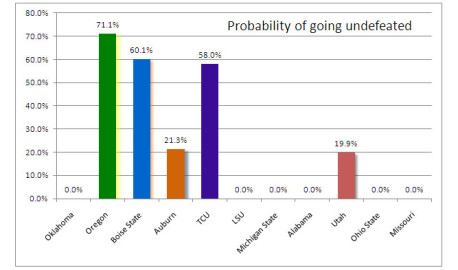 No. 1 Oregon (0.9777, up from 0.9069) is a lock to play in the national title game if the Ducks win out. Oregon bested USC by 21 points and gained 599 yards against the toughest road opponent Oregon would face all year. The Ducks’ odds of going undefeated rose from 44.6 percent last week to 71.1 percetn this week. Oregon’s sole remaining challenge for this year is against No. 15 Arizona on Nov. 26.

No. 2 Auburn (0.9599, up from 0.9371) gained votes in all polls, increased its ranking in the computer polls (now a consensus No. 1), but fell to No. 2 in the BCS rankings. Despite the fall to No. 2, Auburn is in no danger of not making the BCS title game provided the Tigers win out. Auburn’s chances of winning out rose from 14.7 percent to 21.3 percent after defeating Ole Miss last weekend.

No. 3 TCU (0.8911, up from 0.8833) embarrassed UNLV 48-6 last weekend, and held its fifth consecutive opponent to a touchdown or less. With the win, TCU’s odds of going undefeated rose from 47 percent to 58 percent. TCU leads the nation in scoring defense (8.7 per game) and will face its biggest challenge of the season this weekend at Utah. TCU is a 6-point road favorite, and as such should win this game 66 percent of the time. TCU will need either Oregon or Auburn to lose before having a shot at the national championship game. If Alabama were to win out, the Tide would need to defeat two Top 10 teams in LSU and Auburn, as well as a Top 25 SEC East champion. It is unlikely that TCU would be able to maintain a BCS ranking above Alabama in this scenario.

No. 4 Boise State (0.8824, down from 0.8846) should still go undefeated. The Broncos made quick work of Louisiana Tech last Tuesday, winning 49-20, and extended their win streak to 21 games. Boise State’s chances of going undefeated remained at a constant 60 percent. The Broncos get a 7-2 Hawaii team this weekend, but Boise’s real test will come on Nov. 26 when they travel to face what should be a 1-loss Nevada squad. Boise State will likely go undefeated and again be on the outside looking in if either TCU or Utah wins out.

No. 5 Utah (0.7318, up from 0.7049) stumbled in the 4th quarter against Air Force but managed to hang on for the win. The Utes’ chances of winning out rose from 13.4 percent to 19.9 percent as a result. Despite my model’s initial estimate that Utah would be only a 2-point home underdog, Vegas’ line opened at +4.5 and then quickly moved to +6. Utah, like fellow non-AQ teams TCU and Boise State, is going to need a lot of help to make it to Tempe. Winning out in the Mountain West Conference is simply not enough to get you a legitimate shot at the title. 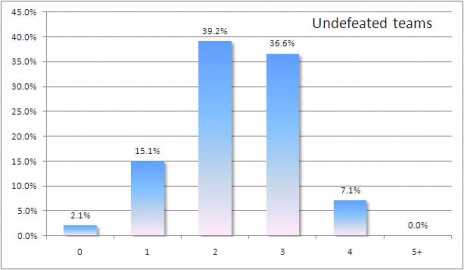 The odds of their being only two undefeated teams, most likely the easiest scenario for the BCS to handle has increased from 34.3 percent last week to 39.2 percent this week. With each team having either three or four remaining games before the final BCS pairings are announced, there is a high degree of uncertainty involved in such projections. That said, the chart below looks at the odds of the pair of teams being the only two undefeated teams in the country at the end of the conference championship games. 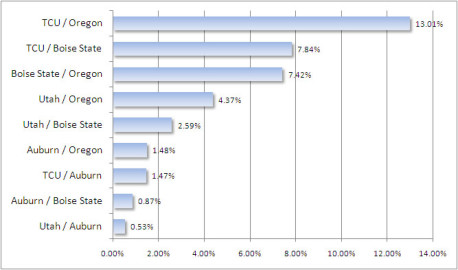 With five undefeated teams remaining and two from the same conference, there are nine different potential matchups involving undefeated teams. It is important to stress that some of these matchups (e.g., Utah vs Boise State) would never likely occur in the national championship game if a team like Alabama wins out. The most likely matchup is now Oregon versus TCU, occuring 13 percent of the time. Even though Auburn enters the picture at the No. 6 position, the experts’ consensus remains that if Auburn wins out the Tigers will be playing on Jan. 10 in Tempe, Ariz.

If Auburn falls to Alabama but wins the SEC championship, the Tigers would likely be positioned around No. 5 or No. 6 in the national polls. In that scenario, Auburn would have an outside shot at getting back into the national title game (we should displace Boise State, maybe Utah). Auburn’s odds obviously go up substantially if Oregon were to somehow lose one of its remaining games. Unfortunately, Auburn would need to contend with one-loss Nebraska team that could be coming off a win against Oklahoma and a Big 12 championship. In short, Auburn could get there but would need a lot of help. A one-loss Alabama team would have an easier time making it than a one-loss Auburn team.

Next week, I’ll rerun the simulation and update these charts and examine any new relevant situations to Auburn. Feel free to shoot me an email or post a comment if there is anything in particular the readers of TWER would like me to look into.