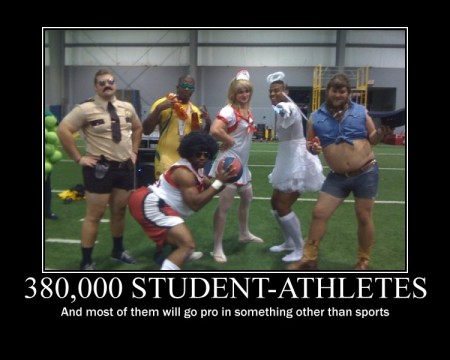 What with the fresh coat of paint over Reggie Bush’s collegiate exploits, the multi-player scandal at UNC, AJ Greene’s jerseygate, and, yes, the allegations that swirl around Cam… again the question rears its head: should college football players get paid?

The issue seems to boil down to this: college football is an enormous industry, generating hundreds of millions of dollars every year, and excluding scholarships, the young men on whose backs this enterprise is built see nary a dime of that vast take. Some folks see this as basically criminal – after all, aren’t college athletes risking life and limb to play a game for our entertainment, for historic but impractical rivalries, simply to play it at all? Do they not earn every penny on the field? And isn’t this stuff going on everywhere, anyway?

The model that underlies that reasoning is a sort of NFL-lite : colleges are businesses, businesses create revenue, and those who toil in body and mind to make it happen are entitled to their share. On the surface it makes plain sense. But it’s wrong.

Collegiate endeavors – athletic or academic – are not built on that model. Think about the average grad student, who pays nothing but time and effort into attaining a terminal degree. Think of the student volunteers who help run community organizations, the kids who run political clubs that stump for candidates, the participants in intramural competitions. Does the president grace his Young Democrats with their cut of the financial spoils? No. Does the grad student get a share of the enormous grant they help their principal investigator win? No. Not one of them gets paid – or if they do, it’s not a share, it’s more of a stipend that allows them to eke out a living whilst they study.

So why do they do it? Why does a grad student slave over their thesis, staining their teeth with buckets of cheap coffee and sacrificing much of an average twenty-something’s normalcy as they burn through day after day in the lab? Why do the Young Republicans invest hour after hour as they grassroots-campaign for their candidate? Why do the mathletes compete? What they get out of these non-paying positions is what we all hope to get out of our educations: opportunity. Just about every college student emerges in worse financial straits than when they entered, but in far better position to make and to seize opportunities in their chosen fields. The young politician gets his start on the campaign trail. The PhD who runs an industry lab was once a nose on his PI’s grindstone, scraping by as he completed his training. That’s what makes grad students amateurs. Amateur status is not going unpaid for your work. It’s the period of development that precedes marketable, salable proficiency.

You come to learn, you give us the sweat of your brow, you help the university grow and succeed, and in return, you get the opportunity to make a career out of your particular skill-set. If we’re talking about a master’s program in chemistry or engineering, no one blinks when the patents, grants, and royalties go entirely in the PI’s pockets. We have to remember that, likewise, college football players are still in school, and not just so they can attain a recognized degree in their chosen field of study. These guys attend regular college and are simultaneously attending graduate study in football, entirely analogous to grad school in almost any other field in terms of its commitments and specializations.

And accordingly, its pay structure should be identical – pay them in education and opportunity. They get a college degree for free, and for a select few, the kind of training that will make them into twenty-two year-old millionaires.

What an astronomically good investment, what an incredible deal. The development of complex and specialized skills. The essential physical conditioning. Discovering an appropriate role in a pro football system. Scholarship athletes pay essentially nothing for access to these critical services. How much do you think that kind of training is worth, for the average college football player with any aspirations toward the NFL? Few graduate programs can offer such amazing returns on, essentially, an initial ante of zero. For comparison’s sake, I accrued about $250,000 in loans just going through medical school, currently make less than minimum wage (if you divide my resident’s salary over the hours I put into the hospital,) and as a physician will bring home about a tenth of what successful NFL athletes pull down in a year. Who’s the better investor here?

I say, while still in training, they’re still amateurs, and if they don’t need any more training, then let them declare for the NFL like any other professional might. Eradicate the minimum age at which players go pro, and let the NFL draft be the professional opinion which enforces amateur status. After all, the people who judge whether a player is NFL-ready ought to be the NFL, not the NCAA, or the coaches, or the players themselves. And regarding potential NFL players, I’m for a hyper-amateurization of the sport: take a select few guys and admit them to a graduate football program. Give them a core of basics in terms of mathematics, English, and science and then fill up the rest with seminars on the history of the game, basic offensive / defensive philosophies, and practical economics / business skills they can use to successfully manage their pro-ball fortunes. That’s bound to be more useful – and let’s out with it, more honest – than a parks ‘n’ rec degree.