With one of the most significant Iron Bowls in recent memory right around the corner, I thought we could take a look at how each team has performed against a set of common opponents: Mississippi State, South Carolina, Arkansas, LSU and Ole Miss.

This fact accounts for the large differences in home/away performance statistics but also serves to make Alabama’s home dominance a little easier to understand.

Auburn is giving up passing yards at an average rate of 154-236 this year in all games, while Alabama is surpassing its opponents by an average of 246-205. At home, the Tide’s margin grows to 248-130, while on the road Auburn is actually outpassing opponents 194-158.

The table above and chart below show average game performance ratios. For example, Auburn is averaging 40.4 points per game to Alabama’s 23.8. This equates to a 1.7 to 1 ratio in favor of Auburn, which is represented as 169.7 percent in the table above and the first blue bar in the graph below.

Examining the chart below, you can see that Auburn is relatively consistent in its performance relative to Alabama at home and on the road. Comparing yards per play (offense and defense), neither Auburn nor Alabama has struggled with teams from Mississippi, though Alabama’s relatively stronger performance against these teams may be attributable to its home-field advantage in both these games. Against the upper echelon of the SEC (LSU, Arkansas and South Carolina), we see a few differences.

Both Auburn and Alabama teams played South Carolina very evenly on a per-play basis, with both teams outgaining the Gamecocks simply because they ran more plays than Cocky (Auburn 78-57, Alabama 64-57). 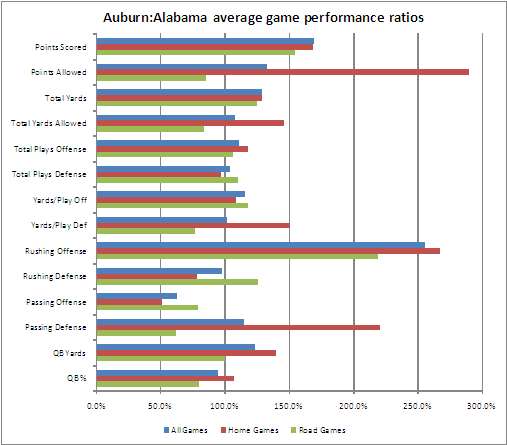 When Auburn and Alabama meet Friday afternoon, they usually say you can throw everything you know about these two teams out the window. I suspect this is less likely to be the case this year as each team knows how to gameplan for the other. Both teams will likely be relatively conservative in their play calling, with Auburn favoring the run and Alabama favoring the pass. Auburn’s pass defense has been the team’s Achilles’ heel all season long and you can bet that Alabama will have a solid gameplan built around quick passes to limit Auburn’s pass rush. When Auburn has the ball, expect the unexpected. Offensive coordinator Gus Malzahn undoubtedly has a handful of trick plays he has been saving for the Iron Bowl, and with Auburn’s rushing attack leading the way and setting up regular “second and short” situations, the playbook will be wide open.