Auburn overcame a 21-7 first quarter deficit, scoring a pair of touchdowns in each of the last three quarters as the Tigers won 49-31 and rolled up 315 yards on the ground against what many thought was a very stout Georgia run defense.

Arkansas overcame a slow start of its own against the Miners as Razorback quarterback Ryan Mallett passed for 215 yards and accounted for six touchdowns in as the Hogs won 58-21.

South Carolina bounced back from a 41-20 home loss to Arkansas and locked up the SEC East title, beating Florida 36-14.  Cocky will be in Atlanta for the first time since joining the SEC in 1992.

Ole Miss and the Black Bears had their bowl dreams squashed by their own quarterback last week.  Masoli threw three interceptions (and completed only seven passes to his own teammates) in a 52-14 loss in which Ole Miss turned the ball over five times.  Maybe it’s time to change the mascot again?  Needless to say, things will only get worse in the next two weeks with games against #5 LSU and #22 Mississippi State.

Vanderbilt found a new way to lose this weekend, turning a three-point halftime lead into an 18-point loss, giving up four second half touchdowns to Kentucky.  Turnovers weren’t a problem this week for Vanderbilt.  Unfortunately, the Commodore “defense” (can you really call it a defense at this point?) allowed a whopping 580 yards on just 67 plays.

LSU surprised by covering a generous 30+ point line against the SEC’s favorite whipping boy: Louisiana – Monroe.  LSU only outgained the “Warbirds” 251-190 in total yards, but forced five turnovers in route to a 51-0 shutout.  LSU quarterbacks were just 8-22 for 95 yards and no touchdowns against one of the worst defenses in Division 1A football.

Mississippi State entered the game at Alabama with aspirations to earn a share of second place in the ultra-competitive SEC West.   By halftime, those dreams were gone and Alabama had reminded the Bulldogs about the pecking order of the SEC.  In a year when Mississippi State managed to hang with mighty Auburn, outplayed Georgia and defeated Florida, they had no answer for Alabama’s offense and lost 30-10.

Fresh off a 36-14 victory in the Swamp, Cocky gets a breather at home this weekend with (4-5) Troy before going on the road for Clemson, the SEC title game, and quite likely a New Year’s Day bowl game.  Freshman running back Marcus Lattimore is now second in the SEC (behind you know who), averaging 107 yards/game.  He anchors a well-balanced Gamecock offense averaging 395 yards/game and 30 points/game.  Garcia should have his way with the Trojans defense, allowing 260 yards/game, good for 9th best in the nation’s worst conference.  The Trojans’ total defense is ranked #103 nationally, allowing 436 yards/game, and #90 nationally, allowing 31 points/game.  Look for South Carolina to get its backups into the game early as Cocky rests up for Clemson next weekend.  Prediction:  South Carolina 43 – Troy 19. 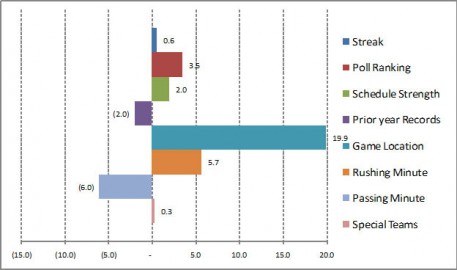 LSU, like Arkansas, is in a two-game playoff for a BCS bowl appearance.  Les Miles would have you believe the Tigers have an outside chance at playing in the National Championship game, but not even the Hat is lucky enough to have a BCS title game appearance fall into his lap (again).  Ole Miss has lost four of its last five, and none of those losses have been particularly close.  Jeremiah Masoli is playing some of his worst football of the year and the Ole Miss defense is allowing a staggering 35 points per game.  That said, despite its win over Alabama, LSU has struggled to exploit opponent weaknesses and frequently plays down to their level of competition.  Even last week’s 51-0 victory over UL-Monroe was nothing special in terms of yards for the Tigers as they only outgained the Warhawks 251-190.  The Model remains cautiously optimistic about Ole Miss this weekend.  If Masoli can limit his turnovers, this could be a much closer game than anyone is expecting.   Prediction:  LSU 29 – Ole Miss 21. 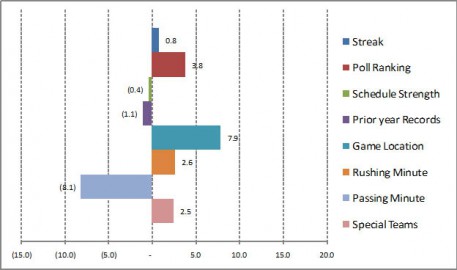 Arkansas may be out of the SEC West picture, but they are not out of the BCS bowl game hunt.  If Auburn and Arkansas both win out, the Razorbacks could jump LSU and be playing in the Sugar Bowl this year (potentially against Boise St – wouldn’t that be a matchup).  To get there, Arkansas has two tough defenses ahead of them, but the Hogs have proven all year that no one can stop its passing game (3rd nationally, 344 yards/game).  The Razorbacks’ rushing game has also suddenly come alive, providing a balanced attack Mississippi State has shown itself to have difficulties stopping.  Though the Bulldogs have the #3 scoring defense in the SEC allowing only (18 points/game), they’ve yet to face an passing game as dominant as Arkansas’.  Look for Arkansas to cover as road favorites and knock Mississippi State out of the Top 25.  Prediction:  Arkansas 29 – Mississippi State 24. 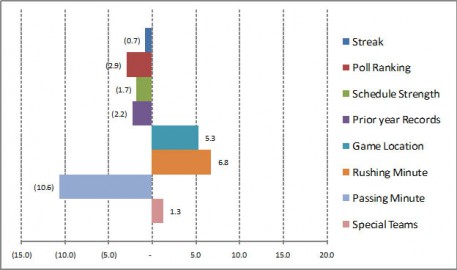 Vanderbilt and Tennessee each have one conference win, not coincidentally over the same opponent: Ole Miss.  This is a crucial must-win for the Vols who need to win out to become bowl-eligible.  Vanderbilt comes into this game sporting a typical 5-game losing streak built on the worst offense and defense in the SEC.  The model is comically predicting 22 points by Vanderbilt, a score they’ve only achieved twice all season – once in a 28-point victory against Ole Miss, the other in a 52-6 beatdown of Eastern Michigan, the worst of all the directional Michigans.  Take Tennessee to cover on the road on the strength of Tyler Bray whose made a name for himself exploiting the famously weak second-half schedule of Tennessee.    Prediction:  Tennessee 31 – Vanderbilt 22. 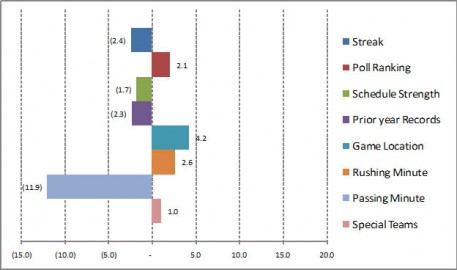 Mac Mirabile is a 2002 graduate of Auburn’s economics and journalism departments.  During his time at Auburn, he was a copy and photo editor with The Auburn Plainsman.   He has a Masters in Economics from UNC-Chapel Hill and has written numerous academic publications on college football, the NFL, and gambling markets.  He can be reached at [email protected]