Folks, a disturbing new study from Auburn University’s College of Veterinary Medicine has uncovered a growing phenomenon in the state … Crimson Tide garb and merchandise placed near the family pet has an adverse affect to that pet’s well being! (i.e. It’ll make your pets sick ya dingbat!)

This surveillance photo from the lab confirms it: 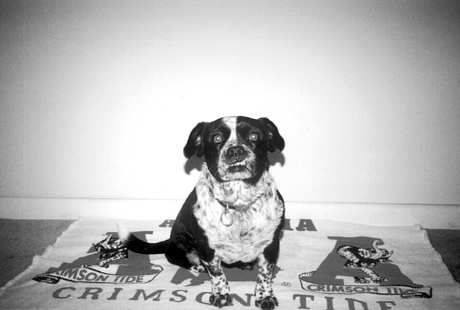 This dog is sick. Sick and angry from whatever foul emissions are wafting from that crimson-and-white rug. It burns his hide. Literally.

Dr. Martin Van Nostrum’s report will be released in the upcoming issue of Barners of Biology Bi-Monthly. We here at The War Eagle Reader learned of this study and were given an executive summary of the research.

The following images are not for the squeamish. Dr. Van Nostrum would like to note that all test subjects signed on to the research willingly in the name of Auburn science and were given cookies and belly rubs from lovely warm-handed co-eds as a stipend. But the poor animals and researchers did not fully know the repercussions.

What follows is a list of lap … er … lab subjects and the observed adverse reactions from wearing Bama gear. God help us all. 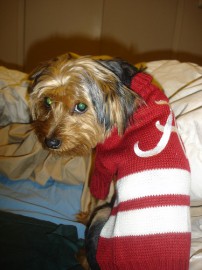 Subject No. 1716, “Tammy,” experienced problem flatulence while wearing this sweater. 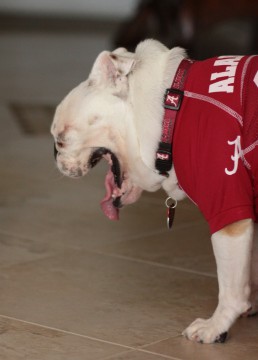 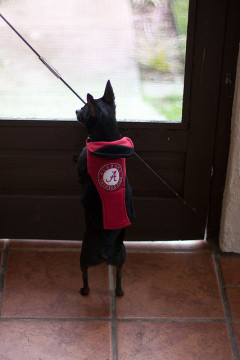 Subject 1989, “Millie,” showed signs of depression and a deep sense of loss and abandonment. 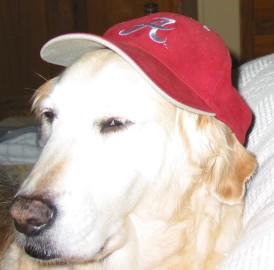 “Jack” turned to the liquid embrace of alcohol and narcotics in less than a week after wearing this hat. The dog’s look of disdain was noted in the research. 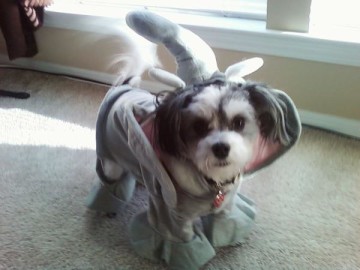 The sad case of Subject 7533. The current whereabouts of “Mike” are unknown after his escape from the lab. 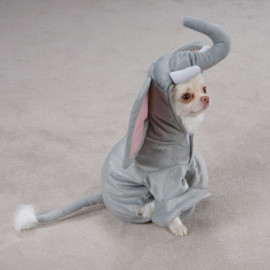 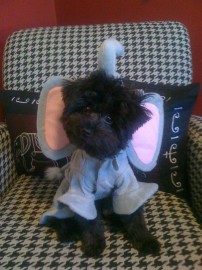 This poor creature was a large, impressive specimen before being dressed in this elephant costume and placed in a houndstooth chair for a day. “Johnny” withered down into this animal in mere hours. The research team recoiled in horror. 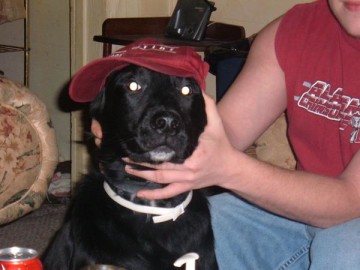 The test subject experienced severe case of “evil eyes.” “Candy” could cook a turkey at 10 paces with her unholy gaze. 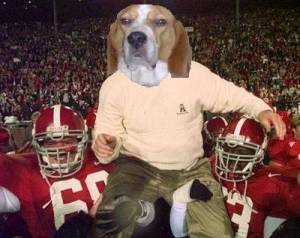 “Hunter” experienced extreme states of “billcurritis.” He led the Crimson Tide to a win over Mississippi State in a lab simulation. But the poor hound scared easily around bricks. 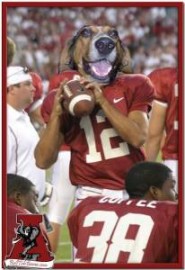 “Sandy” constantly ate grass and had uncontrollable bowel movements when put in this particular jersey and the keyword “McClover” was uttered from the scientists.