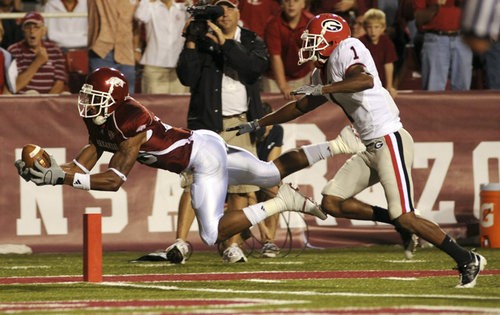 This much we know now, know for a concrete Encyclopedia Auburnica fact: this year’s Tigers are not last year’s Tigers. We went over this entering the Kentucky game: the 2009 team won its fifth game and took four tries to win its sixth, never won a second SEC game on the road, had absorbed three losses in conference before earning a third SEC win. The odds of Auburn not getting past a seventh win are virtually nonexistent at this stage; frankly, the odds of them finishing with any fewer than 9 are so slim as to not be worth discussing at this point*.

So, yeah, the Kentucky win might not have been as heart-friendly as we’d have liked. It’s not fun realizing–again–that our defense may accidentally set itself on fire and run screaming through a 12th-story plate-glass window at any time. But it was a mammoth win all the same. The biggest, most simple question mark we had before the season–are they better?–has been answered.

Simply, Auburn has done everything we could ask of them to this point. Every. Thing. And they deserve a world of credit for that. But I’m not telling you anything we haven’t known for months when I say that what comes after this point is what will define this season. Auburn has positioned themselves at the precipice of incredible things, things even the most optimistic of us didn’t really consider possible when this season started. But they are also at the precipice of incredible disappointment; to be poised here, with three of our biggest rivals set to come to Jordan-Hare Stadium and victories in even two of those likely to set up a one-game playoff for Atlanta, to fall short of that … for this season not to become something special when something special is this close would be devastating.

So here we are. Auburn steps off the edge this week. Do they fly, or plummet?

— That may make it sound like I feel this is an all-or-nothing sort of game … I don’t. A loss here coupled with wins over LSU and Ole Miss, and Auburn will be fine. It’s not time yet to start expecting to roll into Tuscaloosa undefeated. In terms of the SEC West, Arkansas still has LSU, Carolina, and a trip to Starkville ahead; they could easily wind up with a second loss somewhere down the road.

But if Auburn wins–against what I believe to be the best team Auburn will face until the final week of the season–the stakes only get higher and higher. As in nationally high. As in “10 wins is right around the corner.” So to some extent I feel like Auburn has more to win than to lose this particular week. That’s a good thing.

— I’ve already written a good bit about the nuts-and-bolts of the game at al.com and Arkansas Expats. Summarized, it’s too much to expect Auburn to shut down Mallett and Co., but Auburn should be able to get enough pressure and enough stops to keep things relatively in check; offensively, I don’t think the Hogs have enough to shut down the Tiger running game or Malzahn’s deep shots with the game in J-Hare.

But if I think Auburn has an edge, it’s razor thin, and that’s even before you think about the history of this series. It’s not unusual for my head and heart to disagree about the outcome of an Auburn game, but it’s exceedingly rare for the head to say “Yeah, I think Auburn pulls it out” and the heart to say “Man, I don’t know about this.” But the combination of Auburn being 6-0, being favored, and facing Arkansas puts a horrible feeling in the ol’ gut. We’ve been down this road many, many times, and it always leads us into the ditch.

The good news: in those other cases, Auburn was typically top-10 and Arkansas was unranked and generally considered little more than a pest. (I’m fairly certain I heard someone on ESPN say this is the first time these teams have met with both ranked.) I don’t think there’s any illusions this week about Auburn needing anything less than absolute best effort. If Auburn’s not prepared, it won’t be because the Hogs are being overlooked.

— If there’s one thing I feel like I ought to emphasize about the match-up, it’s that Auburn has to get pressure, and preferably with the front four. Mallett’s probably going to give us a couple of freebies here and there, but if we don’t put him on his butt on a regular basis, there’s just no way our secondary isn’t smashed to pieces.

— We’re on CBS in the afternoon! It’s sad how happy that makes me.

*Maybe this is hyperbole, but do you see this team going 1-4 against Arky, LSU, Ole Miss, Georgia, and ‘Bama? When three of those games are at home? I do not.