If you want to show off your Tiger Pride send
your photos here today and I’ll nail ’em up here on this post.

FULLTIME UPDATE from Jerry: Words? Words for that, that thing we all just witnessed? Surely you jest. But I guess I’ll try:

— The bottom line is that Auburn is 7-0 and with a win against LSU next week, will be a heavy favorite to go to Tuscaloosa undefeated. Insane. Nothing else anyone says matters at all in contrast to that.

— Obviously Auburn caught a lot of breaks this game, none bigger than the two replay calls that went Auburn’s way. But when Auburn finally got a little bit of traction there in the second half, they put their foot on the Hogs’ throat. After the Bynes interceptions, there was no fooling around. Auburn deserves a lot of credit for that. (Also: the returned fumble was probably down. But when it’s that close, there can’t really be any complaining.)

— OK, I’ll say it: Cam Newton for Heisman. I’m not sure I’ve ever seen an Auburn player just flat singlehandedly dominate an opponent the way Newton did last week … and then he did again this week. He’s a monster. I’m just glad he’s on our side.

— Fitting that the two biggest plays in pass coverage all game were made by our middle linebacker.

— And now there’s probably no Savage and possibly no Bell. YAY.

— 65 freaking points. We probably can’t give Malzahn a raise midseason, but can we get him some extra fringe benefits? Someone sign him up for the Coffee of the Month club or something.

UPDATE from Jerry: Wow. Certainly no lack of drama that half, huh? Never a dull moment with this Auburn team. The way Auburn has played in second halves this year, you have to be somewhat confident. Especially since the Hogs are putting up as little resistance against the run as we expected.

Though not too confident.

— It wasn’t a touchdown. We all know that. It’s a massive break for Auburn and I don’t blame any Hog fans for bleeding from the eyes after the call came down. That said: the zebras handed the Hogs 4 points with the interference call. And they handed Auburn 7 with the fumble. So we’re +3 in Official Gift Points. The other thing to remember is that if you’re not on the goal line, you don’t get that call. Auburn deserves some credit.

But not much. And I’m sorry, but that’s the last time I want Mario Fannin carrying the ball as a tailback. The percentage of balls he’s put on the ground this season is just unsustainable.

— Obviously it’ll be another huge break if Mallett can’t go in the second half. But it’s hardly a guarantee, as Neiko Thorpe so ably demonstrated.

— Cam Newton. What else can you say?

— The penalties are going to render me bald by the end of the season, I swear.

Halftime — More photos! (I had to make a BBQ ‘n’ beer run pregame and missed a ton of pregame photos.)

Jeremy sent in these two: 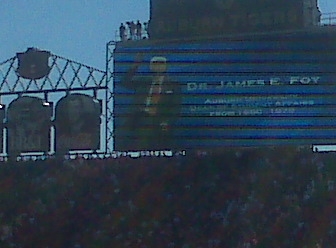 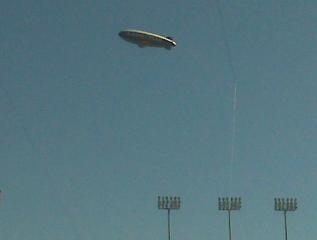 Charles Wright sends this and says: I shot this video today at noon as Samford Hall played War Eagle.

Jeremy sends this in: First players running out. 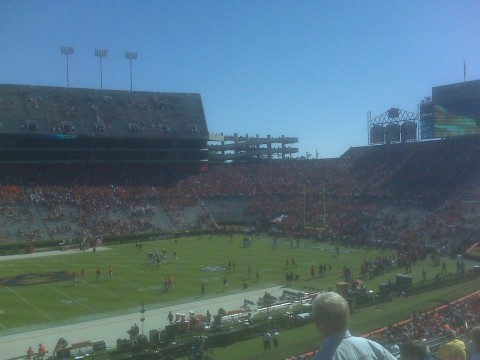 Lauren Grider sends this and says: We saw this while passing through the tailgating in front of the stadium. 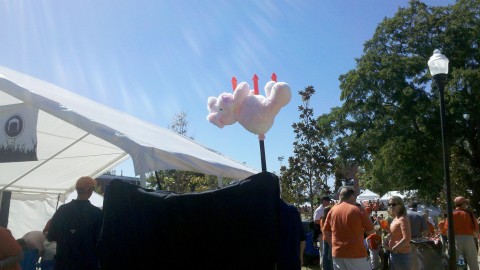 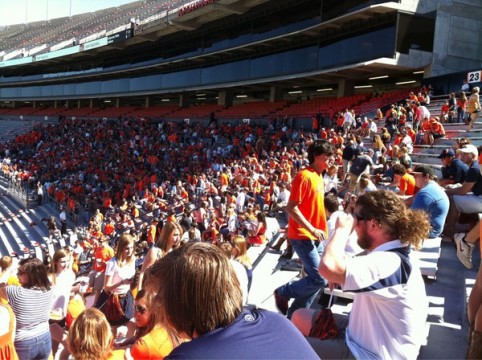 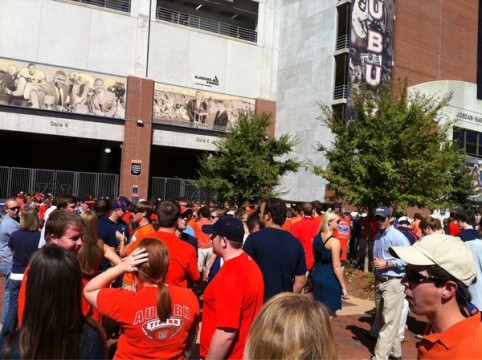 Also, Jeremy sent this along: RT @thejuiceisgood: Coach Chizik told students to get there early … and he’s now having 120 pizzas delivered to students already in line.

Pregame 11:40 a.m. CDT — Woah. This has nothing to do with the game today, but I just came across this. Has anyone heard about this just-published book “A Matter of Conscience: Redemption of a Hometown Hero, Bobby Hoppe” that deals with the charge of first-degree murder that Auburn RB Bobby Hoppe (he was on the 1957 championship team) faced in the 1980s? He was cleared and said it was in self-defense. Sounds like a pretty good read. Here’s video of his widow and author of the book, Sherry Hoppe, from YouTube:

I’ll have to check this out further. Here’s a link to a news story about the book too.

Pregame 11:15 a.m. CDT — The Gameday crew on ESPN went 2 out of 3 picking the Tigers. The drummer for Kings of Leon picked Mallett to throw all over us. Whatevs, dude. Stick to drumming for that soulless band.

What are y’all’s thoughts on Arkansas Coach Bobby Petrino? This is how I used to see him back when Tubs was our coach … 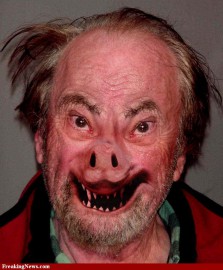 According to this quote from Jay G. Tate’s notebook in The Montgomery Advertiser, Petrino feels welcomed at Auburn. Does hospitality go too far when the opposing coach does not fear the confines of Jordan-Hare?

“It’s enjoyable going back there and playing,” said Petrino, who served as offensive coordinator in 2002. “Two years ago when we went there, you know, they’re nice people. When you drive up in the bus, instead of flipping you off, they clap for you. It’s way different than some of the places we go. They’re a good crowd to play in front of because they’re hospitable.”

Pregame 8:30 a.m. CDT — In an effort to ease my worried mind, let’s look at what are the sports reporters and our fellow bloggers are saying this morning:

• First off let’s give the love to The War Eagle Reader crew … Jerry talks about (and talks us nervous fans down from) the precipice. … Justin does an EXCELLENT job with the preview of the game. (by the way did you see how he nailed last week’s preview with Kentucky? He nailed it.) Justin says 33-20, Auburn. … “The Wishbone” addresses that damn hog hex. (I myself traveled down in 2006 to sit slack-jawed in the stands and watch The Hex in action. It’s real.) … The model likes us! The model likes us! Mac’s “Predict-O-Nomics” model says its gonna be 11-point cushion for our boys in orange-and-blue, 35-24. … The guys from Arkansas Expats come over to shoot the breeze with Jerry (and worry a little bit about Cam Newton, heh heh heh.) And Jerry goes over to the Expats excellent blog too.