You know, maybe it’s just one of those seasons.

You know the type. You’ve seen other teams have them. Mississippi State under Croom a few years ago, the run that got started with Brandon Cox gifting the Bulldogs a touchdown in J-Hare. Vandy in 2008, that team that seemed to burn through all the good fortune the ‘Dores had stored up over their countless years of, well, horrible fortune. To lesser extents, Tubby’s 2006 Auburn team, or Les Miles’s 2009 (and sort of 2010) LSU teams. Seasons always on the verge of disaster, always on the verge of something going horribly wrong, always riding one or two plays to their victories, where you always think “This team can’t be that good” … and you look up, and their record glitters.

Of course, most of those teams were decent-to-good teams that used that type of season to wrangle an unlikely bowl bid, or merely a New Year’s Day one, rather than a championship. What happens when a team that’s already borderline-great hits a vein of good bounces this rich? 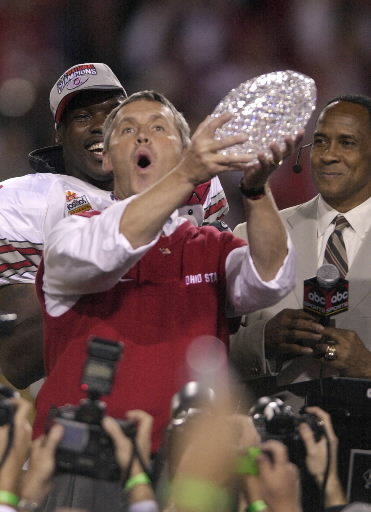 That “said,” let me clarify a few things:

1. Unlike, say, the Vanderbilt team that got Tony Franklin fired, this Auburn team is clearly not entirely a product of luck. Cam Newton is arguably the best player in college football. The Auburn offense is operating at a lethal level even I never thought it could reach. The defense looks a shambles today, but when the offense was finding its footing against Mississippi State and Clemson, that was the unit that won those games.Auburn has been fortunate. But they also have been good. You don’t win four one-possession games and the flying circus that was yesterday’s matchup without being in position to win those games.

It’s like the Fannin touchdown; we all know he fumbled, that the official closest to the play called it a fumble, and that Auburn caught a freaking massive break that it wasn’t named a fumble after the review. But if that play happens anywhere other than the goal line, there’s not even any review. And Auburn wasn’t on the goal line by accident–they were there because they’d gotten a solid kickoff return to their own 29 and run the ball six consecutive times, including a 40-yard jaunt by Newton, down to the Hog 4. In a lot of ways, Auburn is lucky. But Auburn is also making their own luck all over the field.

2. Trust me, I’m not predicting an Ohio St.-like run to a crystal football. I think, frankly, it’s silly for anyone to name any team other than Alabama the favorite in the SEC West when they control their own destiny and get to host Auburn in what’s already shaping up as the biggest Iron Bowl in more than decade. Unless the Tide absorb a second loss, the West title goes through them.

But you know … Auburn has led a charmed life so far. The dropped pass by State. The errant Parker pass in overtime. The fumble against Carolina that dribbled out of bounds. The even-more-critical fumble against Kentucky that dribbled out of bounds. Now the friendliness of the replay official against Arkansas. As I’ve said, the other shoe will likely drop eventually … but it’s looking less and less like it’s going to drop this season. What it looks like is a season where everything just happens to go just right.

Auburn has nothing to apologize for. Because they’re worthy of being 7-0. Because sometimes these seasons just happen. That both of those statements are true means I cannot freaking wait to see what happens next week. It’s been a hell of a ride already; that we have 6 and maybe even 7 more gamedays’ worth of the ride fills me with a giddiness I can’t even describe.

— It’s funny, I mentioned after the Kentucky game that Auburn had outgained the ‘Cats by a wide margin but hadn’t actually been all that much better offensively; they just had dramatically worse field position. This week: Arkansas outgains Auburn 566-470 … but started at their own 23 on average. Thanks to Auburn’s special teams dominance and the Bynes picks, Auburn started in their own 43 on average.

— Arkansas fans seem to be pointing to the Etheridge return as the game’s turning point, but for my money, Auburn had already regained the momentum on their previous drive. The Hogs had just scored their third straight touchdown–each seemingly more easy than the last– ot go up 43-37. We all knew that a second straight Arkansas stop would equal a fourth straight Arkansas score … and Game Over.

What happened was that Auburn got a 29-yard return from Washington and went the remaining 71 yards in 7 plays without even needing a third-down conversion. Newton made it happen, of course, hitting Burns for a first down on his best throw of the day and then connecting with Blake for the score on his second-best throw of the day.

— Griping about the defense … I mean, what’s the point? The secondary is terrible. We know they’re terrible. With Bell and Savage out, they’re going to stay terrible, though at least it’s hard to see how they can get any worse than they’ve been the past two weeks.

The only good news is that there are no more Kentuckys (did you see what Hartline did to the ‘Cocks?) or Arkansas’s on the schedule. It’s the Jarrett Lee-Jordan Jefferson tag team this week, followed by Jeremiah Masoli, followed by Aaron Murray (who admittedly might be able to do the same thing to Auburn if Bobo lets him), followed by an ever-shakier looking Greg McElroy.

The bad news is that the secondary is terrible. And that even the allegedly reliable rush defense apparently can’t actually defend runs outside the ends.

Oh well. I’m just exhausted of complaining about it. As long as Auburn’s winning, I’m not going to be able to muster the energy to do more than make a note of the facts as they are.

— It’s funny to think that the first time I heard that Auburn was recruiting Cam Newton, the laptop kid, my reaction was “we don’t need his kind of baggage.” Now I want his number retired and fully expect him to go to New York to potentially bring home our third Heisman Trophy. Go figure.