Here are last week’s predictions… and did you see Mac’s post on the Vegas Lines Matrix?

The model’s debut met with mixed success (3-4 Against the Spread) as the state of Mississippi collectively rose up to defy expectations with both Ole Miss and Miss State winning convincingly in the same week.  Tennessee used up their luck for the season escaping with a home win in double-overtime against a UAB team who dominated the Vols statistically but whose kicker couldn’t hit the side of a barn from 30, 35, 41, or 49 yards.  Alabama failed to cover as I predicted, but Greg “undefeated in football my entire life” McElroy’s win streak at Alabama extends to 18 games as the Tide rode Ingram’s 157-yard game to victory.  Kentucky began its annual regression to mediocrity by letting Florida freshman Trey Burton score 6 times on 10 touches.  Mississippi State won the turnover battle with UGA, winning 24-12 in the battle of the bulldogs.  Ole Miss reminded us all that they simply don’t play defense in the WAC, putting up 55 on Fresno St.  Despite my prediction that Auburn would have some trouble with the South Carolina rush defense, Newton, Dyer and McCalebb combined for 331 yards, and the Auburn defense clamped down in the 4th quarter for another win.   As predicted, LSU’s special teams play and defense were the difference in what turned out to be a close game in Baton Rouge.

I have made small improvements to the model.  Previously, I had been using average game statistics and in this iteration of the model I am adjusting these statistics by the time of possession.  This seems to fit the data slightly better and the model is now better prepared to deal with teams whose per-minute performance is significantly different from the mean.  I am adding my “Lock of the week”, i.e. which game my model is most certain about the outcome.  I’ve also added graphs to help visualize how these various effects all “sum up” to the model’s predicted margin of victory.  I’ve grouped each of the 37 variables in my model into one of seven effects:

The following predictions make use of dozens of carefully selected measures used to describe both the margin of victory and the total points we’re likely to observe in a given game.  If one was so inclined, he could use my predictions to place bets.  In fact, through the first four weeks of games, this model is 99-84 against the spread in all lined games but only 15-17 against the spread in games involving SEC teams.   Just a reminder, the margin of victory is calculated by summing the total “effects” listed above in the charts below.

The model is predicting that annual doormat Vanderbilt will give the Huskies a run for their money this week.  Vandy, who managed to score only 3 points against a solid LSU defense in Week 2, rebounded in Week 3 with a whopping 28 points on the road at Ole Miss.  The Commodores had last week off, resting both the SEC’s worst offense and worst defense.  Connecticut has the Big East’s #1 scoring offense at 33 points per game, and #1 total offense at 394 yards per game.  Although the model believes that the passing and rushing metrics are essentially a push, I’m not as quick to believe that.  Interestingly, Connecticut manages to lose points on the game location as historically SEC teams have fared very well in non-conference play.  Technically, Vanderbilt is an SEC team but their small stadium and student body make them an outlier in SEC play.  Despite the model’s unbridled optimism for all things SEC, personally I could see Connecticut running away with this game.  That said, on average, the model does a better job picking games than I do. Prediction:  Connecticut 26 – Vanderbilt 24. 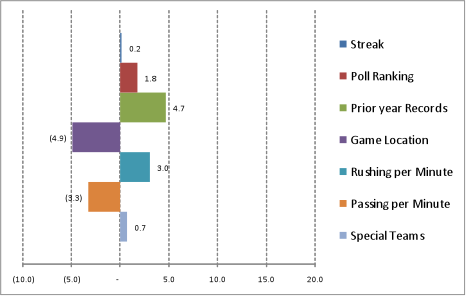 This game could get ugly, fast.  Auburn has a history of running up the score on the ladies from the SunBelt conference as evidenced from the game location bar, which takes into account opponent conference.  Basically, Auburn gets spotted 20 points just for showing up on time.   The #10 ranked Auburn team gets an additional bump from its ranking and the fact that UL-Monroe is shockingly not ranked, despite pulling one a 1-point victory over FCS opponent Southeastern Louisiana for the Indians only win of the season.   The Indians rank near the middle or the bottom of the Sun Belt in nearly every statistical category.  The best aspect of their game has been their #50 nationally ranked (but #1 in the SunBelt) rushing defense, giving up 129 yards per game.  We all remember how much South Carolina’s 60 yards per game rush defense mattered to Cam Newton and Co. last week.  Further complicating matters for UL-Monroe is their #89 ranked turnover margin.  Granted Auburn’s not looking too hot right now at #80, but most would say the Tigers have played a slightly tougher schedule to date.   Look for Auburn to put up 550 yards of offense and then slow things down with the 2nd and 3rd team offense in the 2nd half and fail to cover.  Prediction:  Auburn 43 – UL-Monroe 10. 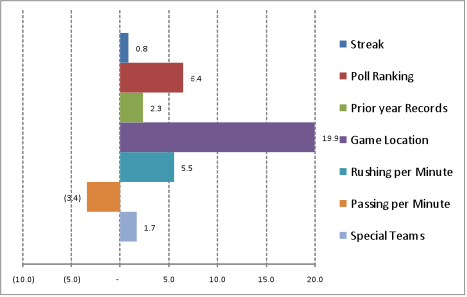 Look for a streaking Ole Miss (one game win streaks still count) to cover against recently exposed Kentucky.  Both of these teams have put up very big offensive numbers against non-conference opponents. The model suggests that just about every phase of the game favors the Rebels, though things look a lot closer when you look at the numbers.  Kentucky has the #28 rushing offense, Ole Miss has the #35 rushing defense.  Ole Miss has the #23 pass efficiency office, Kentucky has the #18 passing efficiency defense.  Both teams are near the bottom of the SEC in most special teams categories, and I wouldn’t expect them to factor much into this game.  Despite the fact that Ole Miss is giving up 35 points per game and Kentucky is scoring 37 per game, look for Ole Miss to limit their turnovers (#116 nationally at -1.5 TO margin per game), and use lessons learned in the Florida game to slow down the Wildcats.  Prediction:  Mississippi 27 – Kentucky 21. 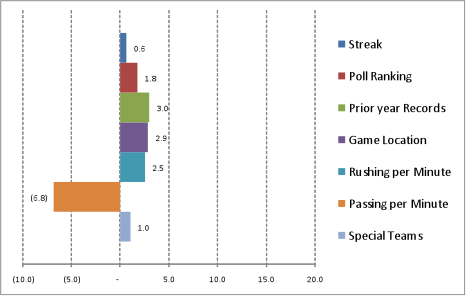 That giant orange bar to the left – let’s call that the Jordan Jefferson effect.  It’s Tennessee’s only chance of winning.  He is Les Miles’ #1 quarterback, but he’s failed to throw for 100 yards or a touchdown in both his SEC games — at Vanderbilt and at home against Mississippi State.  Tennessee is pretty awful this year, but they have the SEC’s #4 passing efficiency defense which could pose problems for LSU.  Look for LSU to run the ball on first, second, third and fourth down all game long to control the clock and keep the Tennessee defense on the field.  LSU will have problem’s putting the ball in the end zone as usual, but Vols fans shouldn’t count on any help from LSU kicker Josh Jasper missing field goals.  He leads the SEC and is #5 nationally in field goals per game, and hasn’t missed in his last nine attempts.   Look for LSU’s Patrick Peterson to be a difference maker again this week on defense, special teams…and offense.  This game should be close until the 4th quarter. Look for Tennessee to cover, just barely.  Prediction:  LSU 30 – Tennessee 15. 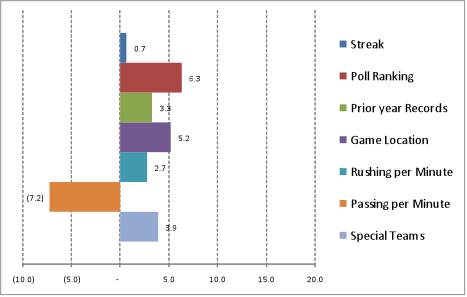 Georgia takes its three-game losing streak to Boulder to face a 2-1 Colorado team whose only loss came in a 52-7 blowout loss at California, who subsequently lost to a newly ranked Nevada team and Arizona on the road.  Georgia lost to a couple of solid SEC teams in South Carolina and Arkansas, but also managed to lose last week to Mississippi State somehow.  UGA’s strength of schedule is likely what Vegas was banking on when they made them 5-point favorites at Colorado.   Before the season began we’d all have thought that the Bulldogs should have the talent to run all over this Buffalo team.  However, Washaun Ealey is averaging only 66 yards per game on the ground to date and will need his offensive line to show up if he’s going to have any success against a Buffalo rush defense allowing only 72 yards per game (#7 in the nation).   Colorado’s offense has been a problem season to date, scoring only 21 points per game and ranking near the bottom of the Big 12 in all offensive categories.  The final difference in the score may best be predicted by looking at prior year records.  Remember teams’ records ultimately reflect the talent on the field and we tend to see slow, not dramatic changes in team’s winning percentage from year to year.  In the 2008 and 2009 seasons, Colorado is 8-16.  Georgia is 18-8 over that same period.  Something about this game makes me think Georgia is going to turn it around this week. Prediction:  Colorado 26 – Georgia 30. 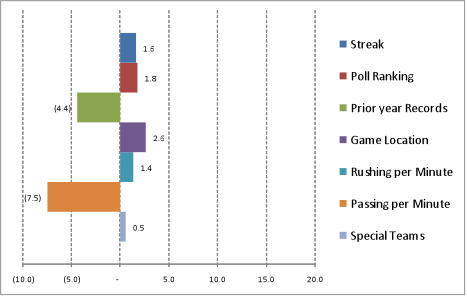 This is my lock of the week: take Alabama to cover the 8 point spread. My model has Alabama by 10 points, but I’ll concede this could be a lower scoring game than I’m predicting.  Alabama’s massive winning streak is worth 3 points in favor of the home team, but the fact that the Tide have to face a top 10 opponent (albeit at home) costs them 1.5 points.  Both these teams have great records over the last two years, but Alabama’s undefeated 2009 season earns them 1.7 points.  The home field advantage is compounded by playing in the nation’s #5 largest stadium, worth an additional 5.2 points for Alabama.  The rushing metrics favor Alabama, but the passing metrics favor Florida.  The kicking and special teams play favors Alabama by 1.7 points.  This game is going to come down to a couple of match ups. 1) Florida’s do-it-all RB/WR Trey Burton vs. the entire Alabama defense.  I have to think that the nation’s number one scoring defense is going to be able to slow Burton far more effectively than Kentucky did last week.  2) Greg “I haven’t lost a game since the 8th grade” McElroy vs. the Florida pass defense. Florida’s #6 ranked passing efficiency defense will force McElroy to throw underneath and Alabama’s biggest underachiever will keep the ball away from Florida’s DBs who are averaging three picks a game.  Prediction:  Alabama 35 – Florida 25. 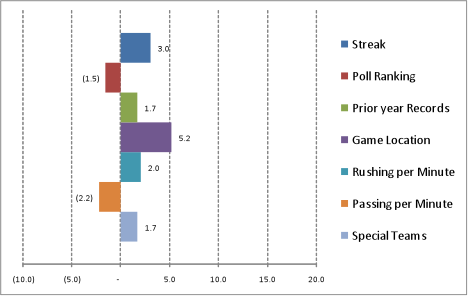 Next week, I’ll be refining the models to take into account strength of schedule which prior to week 5 completing is difficult to assess.