For a review of the methodologies used to estimate the values below, please see last week’s thorough discussion of Monte Carlo simulations. This week, I’ll bypass the technical stuff and focus on what’s most interesting: the scenarios.

The graphs below shows, in order of the first BCS ranking, how many wins each team should average and each team’s likelihood of finishing undefeated. Last week I wrote that the simulation predicted that Oklahoma will probably lose and Boise, Oregon and TCU all have great chances of going undefeated. Oklahoma lost and those other teams are still undefeated, so things are looking good so far. Let’s dig into each undefeated team in a little more detail and examine what has changed from week to week. 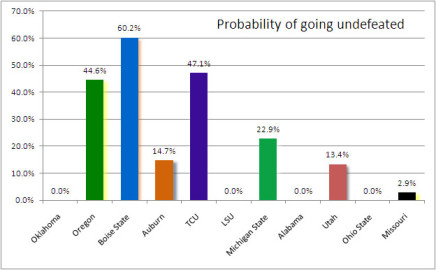 Auburn (0.9371) is currently No. 1 in the BCS standings for the first time ever and remains in remarkably good position right now to make it to the BCS title game. The computers rewarded Auburn’s big win over No. 6 LSU last weekend with an almost unanimous ranking of No. 1. Auburn’s chances of winning out rose from 11.2 percent to 14.7 percent. Auburn has a potential trap game this weekend at Ole Miss, a gimme against Chattanooga, followed by Georgia at home, then a week off prior to the Iron Bowl. Auburn has a 69 percent chance of winning this weekend.

Oregon (0.9069) absolutely pounded UCLA last Thursday night on national television, but the Ducks have yet to play anyone noteworthy on the road this year. That will change this weekend when Oregon visits a 5-2 Southern Cal team whose two losses were by a combined 3 points. Because of the Duck’s opponents appearing even stronger this week, Oregon’s odds of going undefeated drop from 47.9 percent to 44.6 percent. According to the simulation, Oregon wins the USC game 68 percent of the time.

Boise State (0.8846) should still go undefeated. The Broncos made quick work of Louisiana Tech on Tuesday, winning 49-20, and extended their win streak to 21 games. The Broncos kept their starters in well past the point when the game had been decided, but failed to cover as five touchdown favorites. Boise State will likely go undefeated and again be on the outside looking in if TCU wins out as well.

TCU (0.8833) shut down a solid Air Force team last week, making a statement to the rest of the Mountain West conference (Utah). TCU visits Las Vegas this week to sightsee on the strip, hit the buffets and show the Runnin’ Rebels a thing or two about football. As a 35-point favorite, they have a 99 percent chance of winning and a blowout could vault them past Boise State next week in the polls. The Horned Frogs’ chances of an undefeated season jumped from 43.3 percent to 47.1 percent this week, with their sole remaining game of consequence against fellow undefeated MWAC member Utah.

Michigan State (0.8387) remains undefeated in the Big Ten, needing to score two touchdowns in the final two minutes to beat Northwestern last Saturday. The Spartans’ marquee win of the season is a 34-24 victory at home against Wisconsin, though a win this weekend at Iowa would add some much needed credibility to Sparty’s BCS case. Undefeated as Michigan State may be, they are still 6.5-point underdogs on the road against the Hawkeyes and have a 33 percent chance of winning this game. The Spartans’ odds of running the table dropped from 26 percent last week to 23 percent this week, but expect that slide to reverse sharply should Michigan State leave Iowa City with a W.

Missouri (0.8006) jumps from BCS No. 11 to No. 6 this week after defeating BCS No. 1 Oklahoma 36-27. As a reward, the Tigers get to face a resurgent Nebraska team that managed to down unbeaten Oklahoma State on the road last week. Missouri is a 7.5-point road underdog this week, and is expected to win 31 percent of the time. The good news for Mizzou is that after this week, they won’t play another Top 25 team until the Big 12 championship. Missouri’s odds of winning out jump from 1.2 percent to 2.7 percent this week.

Utah (0.7049) again finds itself in the unenviable position of possibly going undefeated but not going to the title game. The Utes, however, have made an honest effort to improve their scheduling, facing both Pittsburgh and Notre Dame out of conference. Utah has been out for blood this season, scoring 50+ points in four games and holding opponents to less than a touchdown in three games. The Utes are a 7-point road favorite this weekend at Air Force, which is looking to bounce back against an embarrassing loss last weekend at TCU. Utah’s odds of going undefeated have grown from 9 percent last week to 13.4 percent this week. For those interested in such things, my model is predicting next week’s Vegas line should be a “pick” game when TCU comes to town.

First a quick reminder what the chart below is showing: the probability of each of these unique outcomes occurring. The first bar shows that there is only a 5.6 percent chance that no team goes undefeated (down from 6.3 percent last week). The last bar reveals that there is a 2.6 percent chance that five or more teams remain undefeated at the end of the year (up from 1.7 percent chance last week). In aggregate, the chances of another major BCS fiasco (let’s say any scenario involving either one or three or more undefeated teams) has increased from 58 percent to 60 percent. 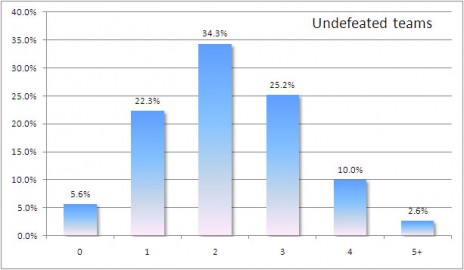 The odds of there being only two undefeated teams (most likely the easiest scenario for the BCS to handle) has decreased from 35.5 percent last week to 34.3 percent this week. With each team having either four or five remaining games before the final BCS pairings are announced, there is a high degree of uncertainty involved in such projections. That said, the chart below looks at the odds of the pair of teams being the only two undefeated teams in the country at the end of the conference championship games. 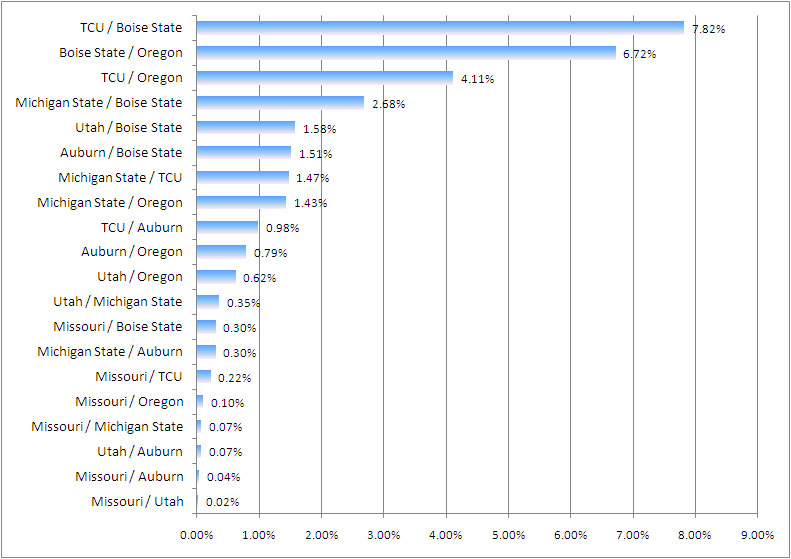 As you might guess from the prior charts, the most likely matchups naturally involve the teams most likely to go undefeated. In the 10,000 run Monte Carlo simulation, TCU squared off against Boise State 7.8 percent of the time. An Oregon vs. Boise State matchup was the next most frequent occurrence. The least likely scenario we see involves a Missouri vs. Utah matchup, with a mere 0.02 percent chance of occurring.

Unfortunately for fans of the SEC, its sole remaining unbeaten Auburn only enters the picture at the No. 6 position with a game against the unbeaten Broncos occurring 1.5 percent of the time. That is not to say that the Tigers would not be favorites against the boys from Boise, it simply reflects the difficulties of the remaining schedule for each team. At this point, there is little doubt in examining the remaining games that if Auburn wins out the Tigers would somehow be excluded from the big game in Tempe, Ariz.

Mac Mirabile is a 2002 graduate of Auburn’s economics and journalism departments. During his time at Auburn, he was a copy and photo editor with The Auburn Plainsman. He has a master’s in economics from UNC-Chapel Hill and has written numerous academic publications on college football, the NFL, and gambling markets. His previous stimulatin’ column can be found here. He can be reached at [email protected]