Week 8 saw The Model go a miserable 2-4 ATS (against the spread).

We all know what happened in the Tiger Bowl last week: Cam Newton set a single season SEC record for rushing yards by a quarterback in route to a 24-17 victory as Auburn rushed for 440 yards against the league’s toughest defense.

South Carolina snapped a 7-game conference road losing streak in a 21-7 win against the Commodores.  With Marcus Lattimore out, the Gamecocks turned to Brian Maddox who ran for 146 yards and a touchdown against the league’s worst defense.

Ole Miss managed to lose despite Jeremiah Masoli playing his best game of his SEC career last week (21-36, 327 yards, 3 TDS, 0 INTS, 15 rushes, 98 yards).  Arkansas put away the game late in the 4th quarter with a 114 rushing yards by Knile Davis after injuries forced QB Ryan Mallett and receivers Greg Childs and Joe Adams out of the game.

Mississippi State almost got caught looking ahead to conference foe Kentucky last week as the Bulldogs survived a 29-24 scare from the UAB Blazers. Mississippi State played without leading rusher Vic Ballard (who will be back this weekend), but still managed to rush for 271 yards and move the Bulldogs to a 6-2 mark.

Tennessee played one tough half of football against the Crimson Tide last weekend, going into halftime down only 13-10.  Four second-half touchdowns later, Alabama had completed it’s biggest road win over the Vols ever.  Small consolation: Tennessee’s Tauren Poole did manage to rush for 117 yards in the game, the first player in 3 years to rush for more than 100 yards against the Tide.

Kentucky managed to out-gain the Bulldogs 423-290, but 4 turnovers and a kickoff returned for a touchdown cost the Wildcats the game as they lost 44-31.  Georgia’s Washaun Ealey rushed for 157 yards and 5 touchdowns.

South Carolina is back home after two games on the road saw against Kentucky and Vanderbilt.  Things should get easier this week when Tennessee comes to town.  South Carolina’s #2 SEC rush defense (101 yards/game) should be able to contain Tauren Poole who leads the SEC’s #12 rushign attack (121 yards/game).  That will force Tennessee’s Matt Simms to throw the ball, something South Carolina has been hard pressed to defend (252 yards/game) allowing .  Simms has struggled against some of the top pass defenses in the league, but South Carolina is not one of them.  Look for Tennessee to keep things (relatively) close and cover as 17.5-point road underdogs.  Lock of the Week. Prediction:  South Carolina 33 – Tennessee 19. 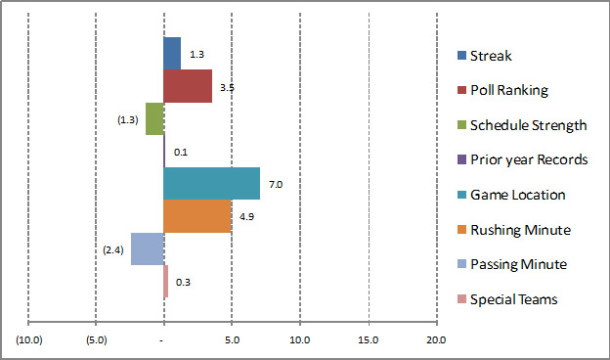 Both teams are riding 3-game streaks into this neutral-site game.  Georgia’s won its last three, though star running back Ealey may not be 100% for the game.  Florida, losers of three straight, has  fallen out of the polls completely, following a preseason #3 ranking.  Both teams have solid defenses and have had problems moving the ball on offense most of the season, so look for a low-scoring affair.  Georgia’s passing defense looks to be its sole weakness, something a struggling John Brantley will try to exploit.  Both teams have excelled on special teams and forcing turnovers this year, look for that to be the difference in this game as Florida pulls out a close one.  Prediction:  Florida 24 – Georgia 23. 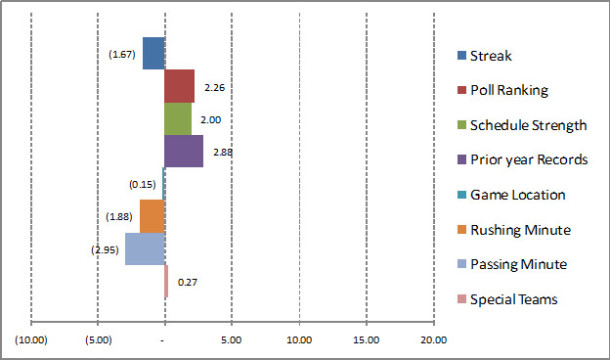 Auburn takes its 9-game win streak to Oxford to face the dangerous Rebel (Bl)Ack Bars.   Coming off two wins over Top 25 opponents, Auburn needs to avoid the dreaded letdown game this week against an Ole Miss team due for a big win.  The turnover problems that plagued Jeremiah Masoli in the first half of the season have largely disappeared in the last 3 games, with Masoli throwing 7 TDS and just one pick.  The Rebels defense has some gaping holes that a well-prepared Auburn team should be able to exploit.  Auburn’s #4 nationally ranked rushing offense (303 yards/game) could face a tougher than expected challenge against the Rebels’ #6 SEC ranked rushing defense allowing just 125 yards/game.  But Auburn has had no such problems against better defenses in the past, and Auburn’s offense seems to get better and better each week.  Look for Newton to take more shots down field this week against the SEC’s #10 passing defense (allowing 249 yards/game).  Auburn’s passing game should have problems of its own against an underrated Masoli who passed for 3 TDS and 327 yards last week against Arkansas.  The model likes Auburn big in a game that Auburn should put away early if it can stay out of its own way.   Prediction:  Auburn 39 – Mississippi 23 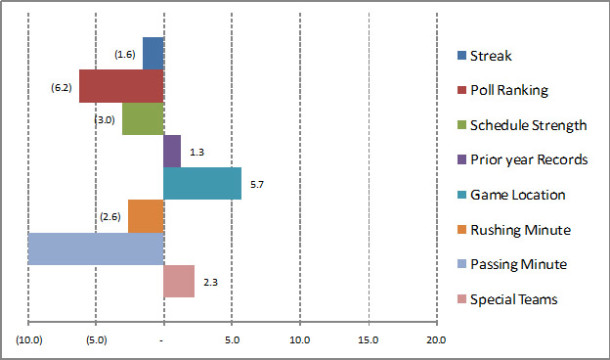 I’m a bit at odds with my model this week as it’s suggesting Vanderbilt will cover as 20-point road dogs at Arkansas.  With a good portion of its offense injured and either probable or doubtful for the game, Arkansas saw the line move to -20.5 after opening at -22.5.  This suggests that Arkansas may “struggle” a little more than initially expected against a Vanderbilt team struggling to put up points.    Regardless of who the Hogs have at quarterback this week, they will find little resistance moving the ball through the air or on the ground against the SEC’s #11 total defense.  Look for Arkansas to emphasize the ground game more this week, building on last week’s success against Ole Miss.   Because Arkansas can put up 35 points on just about anyone, I’m going to make this my “Not a Lock” pick of the week.  Prediction:  Arkansas 36 – Vanderbilt 20. 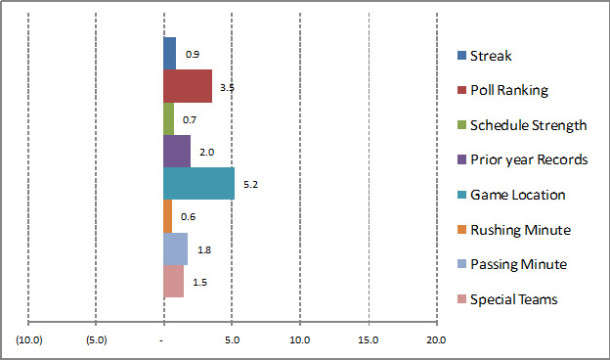 After going 1-2 on a three-game homestand, Kentucky visits Mississippi State in what should be the Wildcats’ last remaining challenge till bowl season.  Kentucky has the SEC’s #2 passing offense (281 yards/game) led by the quietly efficient Mike Hartline who threw for 4 touchdowns last week in an failed upset bid of Georgia.  The Bulldogs poses a stout run defense (#27 nationally, 118 yards/game) that should be able to contain Cobb (Locke is out again this week), but their pass defense (#70 nationally, 217 yards/game) remains a weak spot that Kentucky should exploit.  On offense, the Bulldogs resemble Auburn and their run first, run second, run third mentality.  With the second-ranked rushing attack in the SEC at 219 yards game, Mississippi State will look to control the ball against the Wildcats and their #11 SEC ranked defense, allowing 176 yards/game.  If the Bulldogs can play the same type of defense they did last week against Florida, they should be able to cover the 6-point spread.  If they allow Hartline to get going, this game could be the upset the Wildcats need to go 8-4 heading into bowl week.      Prediction:  Mississippi State 32 – Kentucky 23. 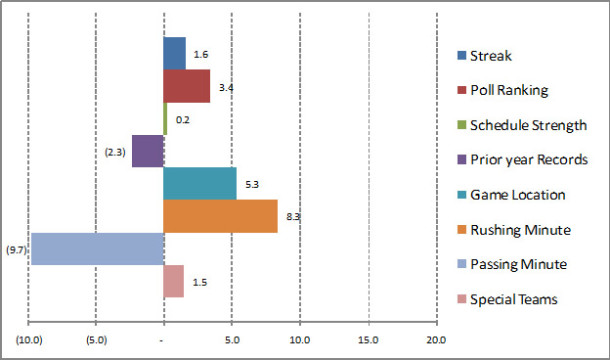 Again this week, I am including my model’s predicted outcome for all games between FBS opponents.  I’ve highlighted games if either team is currently ranked in the Top 25.  The Model is predicting that four Top 25 teams will lose this week: Michigan State, Missouri, Southern Cal, and Baylor.

Mac Mirabile is a 2002 graduate of Auburn’s economics and journalism departments. During his time at Auburn, he was a copy and photo editor with The Auburn Plainsman. He has a master’s in economics from UNC-Chapel Hill and has written numerous academic publications on college football, the NFL, and gambling markets. His previous column can be found here. He can be reached at [email protected]