Tennessee at Georgia in the morning, Alabama at South Carolina in the afternoon and then a night of craziness as LSU visited Florida and Auburn went to Lexington looking for revenge against Kentucky.

The Twitter updates are in blockquotes. Anything that needed further thought is bold. 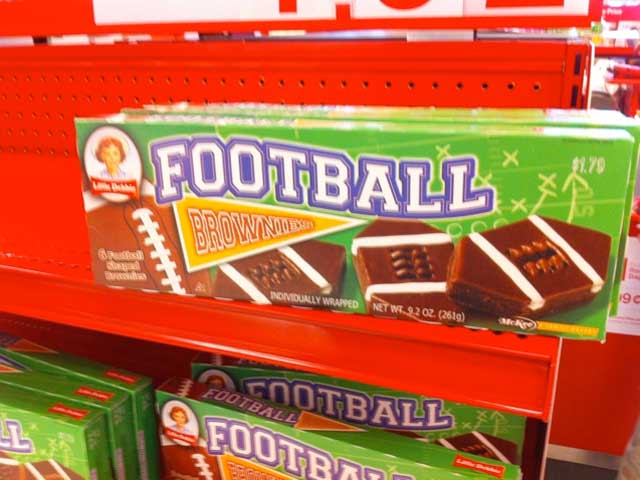 Les Miles eats these. Next week he’ll try to eat the real thing. Somehow, this will win him a football game.

Can anyone explain the internal logic for ESPN3 blackouts? I mean, besides there not being one?

And that was the morning, really, that and Dean Foy. In the afternoon …

Hey Alabama? South Carolina is calling. They’ve got your number.

Somebody in Columbia send me a garnett Beat Bama shirt, mmkay?

When did Gary Danielson replace Barry Krauss on the Tide Network? #coloranalysthomer

Spurrier just benched Garcia so hard in his mind … (Upon the instance of Garcia’s safety.)

When was the last time Alabama’s defense was gashed like this? Been awhile.

Ballgame. (Upon the instance of Bama failing to convert on a fake field goal.)

Alabama fans commence saying many things to soothe themselves for losing to Stephen Garcia.

JUST thinking that. RT @victoriacumbow @StevenStiefel I can see it on Nick Saban’s face: “Who am I gonna blame for this?”

SC beat Bama with their defensive line, wide receivers and backfield. Know who’s are as good or better? #wareagle

And after that delightful mid-day diversion we come to the game of the night, Auburn at Kentucky:

I think of early drives as something Auburn refuses to prepare, opting instead for the joy and challenge of mid-game adjustments. #wareagle I’m ready for any other rationale you might have on the subject, too.

Cam Newton will trade you this stiff arm for your graham crackers. #wareagle

Meanwhile, Florida, on the alternative screen, show you why you should never wear orange jerseys.

Touchdown Auburn! If Cam has a Twitter account his new status from the sideline is “Isn’t even trying hard.” 7-7 #wareagle

Dyer, Lutzenkirchen, Dyer. Kodi Burns. Chewing up the yardage. Look for another drive or two like this before the night is over. #wareagle

@tzac81au, too, looks like he doesn’t have to run especially hard. #wareagle

TOUCHDOWN AUBURN! Cam Newton grinds out the last bit of the bluegrass. Now’s the time to set the tone for the rest of the night. #wareagle

Look at those Kentucky fans, dreaming about basketball already! #wareagle

Nick Fairley is trying out finishing moves for a potential wrestling career. #wareagle (Upon the instance of the first questionable 15-yard penalty.)

I’m thinking of inventing a candy bar and naming it after Josh Bynes. You’d buy one of those. #wareagle

Do not trick or treat Cam Newton’s place. He will just push your costumed kids to the ground like Kentucky defenders. #wareagle

That’s ridiculous. Just ridiculous. Cam Newton to Kodi Burns on the most ridiculous made up play ever. Ridiculous. #wareagle (Spurrier added it to his playbook for next week’s Kentucky game.)

Touchdown Auburn! Another play, another rushing score for Cam Newton. Three tonight as the Tigers roar out to a 21-7 lead. #wareagle (If only they did this for 60 minutes …)

@atcrawford It wouldn’t be the most egregious MNC anyone ever counted. (He congratulated Auburn for claiming the transitive national championship for having beaten the team that beat Alabama …)

@wesbyrum connect to run the lead out to 24-7. #wareagle

Dear referees, @Z_Etheridge4 has been through enough. Now he’s going to go through some Wildcats. (Also, he’s still in play.) #wareagle

Dear referees, It is called gravity. And is legal. Newton (not the quarterback, the other one) wrote a law about it. #wareagle

Florida is playing LSU not to lose. Which is working into Les Miles’ oddly crafted hands.

Cam Newton is winning the Kentucky Derby. Write it down. #wareagle

Touchdown Auburn! Gus Malzahn is working in the future, driving up Newton’s stats so he can show off a Heisman to recruits. #wareagle

So the first half of the third quarter was an excellent time to eat dinner. And if you are superstitious, I’m not having dessert. #wareagle Because my having food was clearly what caused the problem. That and whatever you were doing after the break. And whatever you’re doing, you really need to stop doing it during football because it was not helping matters.

@wesbyrum Chips one in for a score, Tigers re-take the lead 34-31. #wareagle

And we’re tied again, 34-34. I vote for a seven minute drive featuring Michael Dyer culminating in a @supurmario27 touchdown plunge.

Auburn just put us all in the uncomfortable position of Bob Davie making sense. Hate when that happens. #wareagle When Davie is talking about being sensible on kickoff returns you know you’ve over-thought a play.

We’re running yellow-37. That’s Cam scrambling around to make something happen. It is similar to colors green and red, and numbers 4-31.

LSU, with seconds left, lines up for tying field goal, fakes it, drops it, and STILL gets the 1st down. Les Miles’ soul has been sold again.

The play is being reviewed, but Les Miles is laughing because he knows the NCAA has NO RULES FOR HIS MIND.

The Auburn finish was just an inevitability and not quite as dramatic as the Florida game.

“They can spike it, run it out of bounds or throw it incomplete.” Or they can run the LESTER!

We should start to consider the possibility that Les Miles is sane and brilliant and the rest of us are crazy.

After the game Les Miles and are going to Vegas and betting it all on .5 turquoise and walking out with the roulette table! I changed the color because that makes it funnier.

Not a bad Saturday, that.

His previous From The Tweet Seats columns can be found here.

His popular open letter to the Auburn University 2010 recruiting class can be found here.