The Prize: Two tickets to tomorrow’s game against Louisiana-Monroe.

… we’re asking for photos of you telling the coolest, or prettiest, or most important, or most interesting person you know, or at least the most _____ person that you’re not scared to talk to and explain what’s going on and ask if you can take their picture, about The War Eagle Reader. It can be of the two of you checking the site at a computer. Or on a smartphone. It can be of you holding up a napkin with “TWER” written on it near such a person. It can be of a sign with the site’s URL written on it staked by a highway that you think such a person drives down. In other words, it can pretty much be as creative as you want it to be. And we’ll judge which is the most creative. Or coolest. Or whatever.

But the winner, by another lonely, creative mile, were boyfriend / girlfriend Auburn students Ryan Whaley and Jessica Pruehs, who not only told Cam Newton about The War Eagle Reader***, they got him daydreaming about it (click to enlarge)… 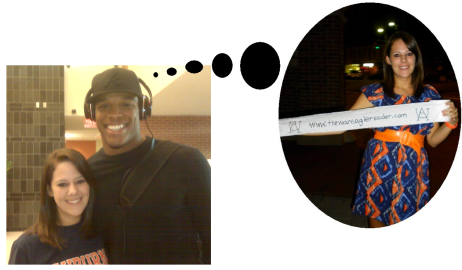 (… which has given us an idea for a future contest: he / she who writes www.thewareaglereader.com on the most rolls of Toomer’s-bound toilet paper wins.)

Heck, they might have even won without Cam, just on the ‘prettiest’ clause.

Way to go, guys! And thanks a million! And thanks again to Auburn Elvis! And a shout-out to our new reader / commenter YeSICAM4heismanTWERfan#2.

We’ll be in touch about delivering the tickets (this is your view, by the way).

Please pull us through.

* Sure, that probably wasn’t the best idea for a contest… and maybe a little arrogant… but it was a Monday… and Jerry was going into labor. That was a crazy time for all of us.

** Turns out it was Pauly Shore.

*** Here’s hoping he already knew about it.