BLLEEEAAAARRRGGHHHHH Internet issues. Thunderstorm = phone lines down = no DSL = you getting this post now. Now stealing WiFi from a neighbor. Don’t report me. 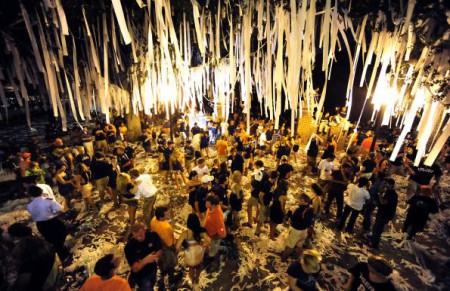 THE NUMBERS (For what the heck these mean, see here.)

Playcall: -1. (I forgot to separate the defensive calls from the offense’s. But if they stay this close to even–last week’s was +2–I may just give it up.)

— Yeah, there’s a reason Gene Chizik called out his offensive line this week: they were really poor, and absolutely gawdawful in the first half. The opening drive sequence was typical: a power rush against Isom flushes Newton on first down, a tackle powers his way directly into the hole on second, and on third-and-short (after strong plays from Newton and Dyer to set that up despite the line’s failings), Da’Quan Bowers slips through the line almost untouched to destroy a sweep. They never did find a consistent answer to Bowers, but they didn’t have a whole lot more luck with the Clemson tackles, either; the first down run in overtime would have gone for big yardage if Pugh doesn’t let his man spin around him and tackle Newton (solo!) at the line of scrimmage.

Last week I felt that Mike Berry was the weak link; this week, unfortunately, it was Isom, Pugh, and Greene that particularly seemed to struggle. (Oh, and John Sullen had a couple of issues in his brief time on the field as well.) Pass protection was still mostly solid (that Malzahn is trying to throw deep virtually every time he throws at all means there’s going to be sacks here and there regardless of protection) and Lord knows they’ve figured out how to block those end-of-half draws that are picking up 15 yards a pop. But there was precious little running room in the interior, and until there is, Dyer and Newton–and the offense as a whole–are going to have some tough sledding.

— The other reason behind the offense’s first-half malaise? Newton. Not only did he hit only one of his first five passes, only one of those was charted as a “difficult” pass, and one of them was also that dead-simple interception for Deandre McDaniel. (A jumpball pass thrown off of one foot ,when a rope finds Burns all alone in space. Horrible decision.) So, no line and no quarterback … it’s not tough to see why Auburn struggled.

To Newton’s credit, save the interception (which should have been a touchdown but was only about six inches underthrown), he was monstrous in that third quarter. We all remember the bomb to Zachery; it’s also worth remembering that the previous two touchdowns were set up with long, well-thrown completions to Adams and that one of those touchdowns was a precision strike in itself.

There’s a long way to go. But Newton’s potential remains as high as ever.

–Onterio McCalebb is back, folks. Remember the Louisiana Tech game, when we were all stunned at how easily he could reach the corner? He had a couple of those plays Saturday, including his touchdown run, where he outran his blocker (Smith) to the edge but also outran the guy Smith was supposed to be blocking. With him in this kind of form, I’d like to see Malzahn try to get him the ball on a screen or swing.

— Another week, another total absence of drops. It helps when you only throw to Darvin Adams, of course.

— It would be an exaggeration to say the defense was basically playing 3-on-11–the three being Bynes, Fairley, and Carter–but it wouldn’t be drastically far off, either. Before issuing my gripes with the rest of the unit, though, let me state how truly excellent those three guys were. Fairley is just at another level right now; his sack and tackle numbers don’t even do justice to how often he’s powering his way into running lanes and blowing up blocking schemes. (I’ll go ahead and say it: if he keeps this up, we’re going to be lucky if he plays his senior season.) Bynes occasionally struggled in coverage, but you don’t become the SEC Defensive Player of the Week without doing a lot of obvious things very right. And Carter’s another player whose box score numbers don’t match his impact–he was Auburn’s best pass-rusher, and arguably saved the game on Clemon’s final play of regulation, when his presence forced Parker to throw off his back foot … and barely out of the reach of their wide-open tight end.

— As for everyone else … man, I don’t know. We’ll start in the secondary, where coverage wasn’t bad; Clemson hit just the one big gainer over the top (to Harper for six). But Parker found a good bit of success on intermediate and timing routes, and the game ended with two massive busts from which only Carter’s pressure and pure, unadulterated luck could spare Auburn’s blushes. Given that the quality in the opponent’s receiving corps will take a massive leap forward in quality this week, Auburn’s going to need better.

And I was stunned to see how little the secondary–particularly Etheridge and Savage–contributed to the run defense. Kudos to Etheridge for his game-saver on Ellington in overtime, but time and again Ellington or Harper would break past the linebackers and seem to have five-to-ten yards’ worth of free passage before either safety entered the scene. I know Roof had them playing cautiously because of Clemson’s explosiveness (a strategy I endorsed myself last week), but there’s cautious and then there’s just reacting too slowly. I think Saturday saw plenty of both on the secondary‘s part.

— Yeesh, the non-Bynes linebackers. Summing up their night’s not hard: they didn’t make plays. If there was a blocker in front of them, they got blocked, the end. The Bates experiment is not working out at this stage–he looks more tentative now than he ever did last year at safety. Stevens has always been excellent in pass coverage (he even showed it again by blanketing Harper on a late-game wheel route); I’d like to see him take over weak side duties and let Freeman come back onto the field to wreak havoc in the backfield … especially against a team with a battering ram like Lattimore.

— Special teams broke even, which, hey, I’ll take it. Nothing spectacular, but Byrum is Byrum (he even had a touchback this week) and there weren’t any disasters. Shoemaker’s net punting needs to improve, though.

— So, overall: lots of things to work on, but also lots of things to be encouraged about. It’s doubtful both the line and Newton can both play so poorly at the same time again, and in Dyer and McCalebb the tailback issues are solved. Auburn needs more out of its outside linebackers and secondary, but the defensive line is killing people and the bend-but-don’t-break approach–frustrating as it may be–is still paying more dividends than it’s yielding up. Auburn’s best days should still be ahead of them.